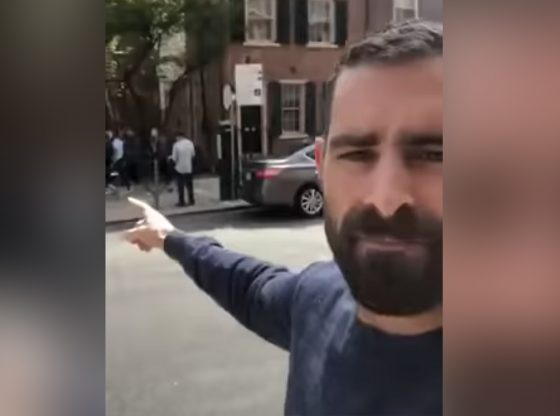 On Monday, it was announced that pro-abortion Democrat Pennsylvania State Rep. Brian Sims would run for lieutenant governor of the state.

In 2019, Sims harassed and doxxed pro-lifers on multiple occasions outside of a Philadelphia abortion facility. He harassed an elderly woman quietly praying the rosary and pro-life teens who were with their mother.

He called the elderly woman an “old white lady” and said she was a “pseudo-Christian.” He said similar derogatory remarks to the pro-life teens.

He later was forced to apologize after nationwide pro-life groups and organizers from around the Philadelphia area rallied against Sims outside the clinic.

Now, Sims has announced his intention to run for lieutenant governor, despite his dark past.

“He doesn’t deserve anyone’s vote for statewide office,” Pennsylvania mom Ashley Garecht told Fox News on Tuesday. “He violated his oath of office as a sitting state representative when he maliciously attacked and endangered three young girls who were exercising their First Amendment rights.”

What are your thoughts on Sims?

sorry but anyone who will KILL UNBORN CHILDREN is not fit to run for any office anywhere…I would not vote for this BABY KILLER !!!

Well it only seems logical that a democrat dealer in death would seek higher office. That way he can harass and denigrate those who are peacefully pro-life without fear of any repercussions. And try and implement the abortion agenda even more.
Hope the voters of PA remember all this when he comes around lying about he didnt do this and that he is “pro-life” until he gets the votes.

Don’t forget he gave an emotional angry fb video that went viral accusing GOP house members of trying to kill him because one of them tested positive for COVID. Turns out it didn’t spread, but his video tried to make it look like GOP members were willingly conspiring to spread the disease – and people believed him.

It would be interesting to see how much money Planned Parenthood has given to this man that supports the murder of innocent life. When you have an abortion you are not making a decision for your body (you made that decision when you had unprotected sex) you are making a life or death decision for someone else. But like all Democrats in PA voter/election fraud will swing the vote in his favor. n my opinion it is donations that drive his support for the murder of the unborn.

This Brian Sims, proudly represents the village muron who obviously believes it is the Christian thing to commit murder by killing babies. To bad his mother did not believe in murdering her own son. He is a shameful person, yes, he is doing exactly what he is preaching, trying to shame other people for believing it is wrong to kill babies as he believes it is correct to murder a baby in the guise that women have the right to do with their bodies what they want. That right does not include murdering unborn babies. Shame on YOU.

They call what he did and will do a patriot, but let a conservative speak out and they want to urn them at the stake. Just like the burning and looting of our cities they are Patriots but hold a protest at the capital then it’s an armed insurrection. This is the exact way the marxist/communist take over by demonizing a group of society and having their demon extremist groups of so-called social justice and culture cancel restoring history so the youth no longer knows the past. Disregard the past and you will repeat the mistakes made.

When is comes to shame, this man should be shamed. God’s law is greater than man’s law. This man should praise his mother that she did not kill him at birth, but instead, she gave him life to make a fool of himself. God says that the baby is a human at conception.

The man is a hypocrite. People have the same right to be there and speak their mind just as he can, but not like he did. Fact: almost 75% of females that show up to a PP (abortion facility) when they see people outside praying and talking, will leave. It’s because people demonstrate how much a baby’s life means to them by showing up, is the best defense for the unborn. PP knows this that’s why they hate peaceful protestors outside of their facilities. Keep showing up, it’s saving lives.

Another hater in our govt. and they promise unity?

Sims is another non Christian that stands ready to kill innocent babies. Only Satan is in his heart. Try saying a prayer to heal yourself Mr Sims. The devil has you by the hand.

He should be run out of the state, let alone people voting for him for anything including dog catcher. He is evil and crazy!