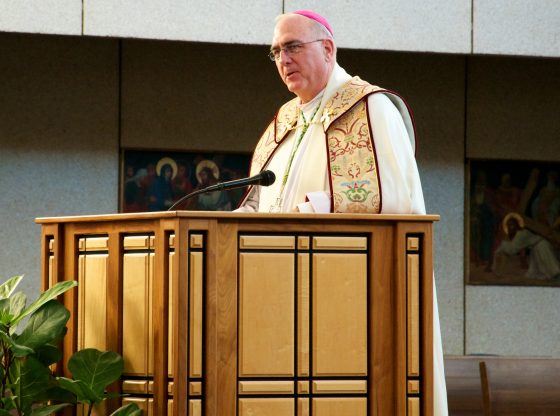 Recently, Kansas City Archbishop Joseph Naumann ripped Joe Biden for parading around as a “devout Catholic” while he supports policies that are in astronomical contrast to Catholic teaching.

“The president should stop defining himself as a devout Catholic, and acknowledge that his view on abortion is contrary to Catholic moral teaching,” Naumann said.

“It would be a more honest approach from him to say he disagreed with his Church on this important issue and that he was acting contrary to Church teaching,” the archbishop added.

“When he says he is a devout Catholic, we bishops have the responsibility to correct him,” he added. “Although people have given this president power and authority, he cannot define what it is to be a Catholic and what Catholic moral teaching is.”

The Kansas City archbishop said that Biden is “usurping the role of the bishops and confusing people” by acting as though faithful Catholics can support abortion.

“The bishops need to correct him, as the president is acting contrary to the Catholic faith,” he added.

Biden has already funded foreign abortions through taxpayer dollars with his policies in the first few weeks of his administration, as well as promising to remove all protections that keep women safe pertaining to abortion.

Archbishop Neumann you best be on the low in case the Pope hears your comments.

Sorry I doubt very much you will ever hear from the pope in a very long time. Ya see he has been a bad boy himself and doing unchurch like things. Sad but true and it’s a disgrace to all humanity. God bless us plz to oust the vermin that has become of our best leaders. Not saying much but really we don’t have leaders anymore just money grabbing power satanic ones who only care for the elites profound idealoligies of the devil himself

The really sick part is what they do with the babies

You ask what do they do with the parts of the babies after they kill them well they sell them. they should all be arrested for murder and the women who allow their babies to be killed should also be arrested. there are enough products to protect against getting pregnant. Why don’t these stupid women use them if they don’t want a baby. shame on them. they spread their legs and welcome the sperm to flow because they know they can go and kill the poor innocent life, just for a few minutes of pleasure.

And only care also for the vote. Let me tell you something. A lot of newly citizens voted for Trump and are catholic. Truth!!!

I know some Catholics that are truly scam artists and use God to push their own ideals. I have been a Catholic since I was a baby. I love the Church and will defend it to the hilt.
Biden is a truly “Joke Catholic” and needs to be booted from the Church.

Pope is a socialist

Any person, or “President” can claim to be something he/she is not, a claim is full of empty words without a documented history of action to back it up! In the case of a President it is much, much worse than just double talk, as bad as that is!

Better be careful Archbishop, Joe’s cancel culture will targeting you and your church. The First Amendment will soon be history.
Elections have consequences!

That bishop was spot on. Biden and piglosi are baby killers and real catholics don’t believe that way. I hope the socialist pope stays out of it since he thinks biden is so great.

The proper term is “Practicing Catholics”

Where the hell were you and the rest of the church hierarchy before the election. Why isn’t he and other politicians voting for abortion excommunicated. The answer is money. Don’t condemn them because Democratic donations would be affected. You don’t care about innocent lives just like you didn’t care about abuse of innocent children.

Archbishop Naumann has the honesty and bravery to confront the phony Catholic Biden. He should be denied the Eucharist.

Needs to be kicked out ( Not Welcome ) and that’s the end. Don’t go or do what you preach. Blasphemy is a sin you can’t come back on. I’m waiting

Biden is as far away as possible to being a devout Catholic as can be. No practiceing
Catholic would do or condone abortion. By the way, he is also one of the biggest liers I have ever heard of. Top of his class? He was 76 out of 85. Maybe Biden went to a liers school. Oh he did, he is a democrats.

He was #1 in liars class

The Bishop is absolutely right!

Archbishop Neumann is a wonderful leader and servant of the Holy Father and Christ Jesus. I just hope and pray that very soon we will have in a pope!

I know you won’t publish my reply to Mac because you don’t want to hear the truth. makes you as guilty as the women who spread their legs and kill the babies. Have a nice day!

I’m with the Archbishop on this one. In addition, I would advise all current and future office holders to walk the talk. The only election that really matters awaits us all.

Why is it that the Catholic Church has not excommunicated Biden and Pelosie. I know people that has been excommunicated for far less. Could it be that the church is run by a bunch of hypocrites?

Church is part of the United States (owner) . Back in the 70’s America was broke and made a deal. I don’t know if it is still that way but it was not Publicly known. It does sum up a lot things now doesn’t it???

It is about time that a Catholic Priest states the truth about Biden being a devout Catholic. Both he and Pelosi believe in murdering our babies in a mother’s womb. This has to be appalling to God and causes much sadness for Him. I have adopted a child who’s parents find him/her inconvenient by praying for them to find a way to let the child be born and let a childless couple adopt him or her to have a loving and fulfilling life to know Our Lord. Amen

We already know that Biden does not BELIEVE. His only concern is his personal belief which is leading him straight to hell. We all need to pray that God will give him the opportunity to change, to recognize evil for what evil is, of Satan.

The day BiddyBoy sets one evil foot into a church, he will catch on fire 🔥🔥! God doesn’t approve of those who say one thing and then does another. He is watching BiddyBoy carefully!

Wonder what other sin ole Biddy has committed on a regular basis? How about groping young interns in the White House? Hmmmm? What else?

Biden is a lier, and sick in the head! Killing fetuses is sick and he needs to be impeached!

Obviously, the Popes comments show he has total support from the very top

He needs to add Pelosi to this speech as well. Another so called devout, practicing Catholic.

Thank you ! You are right sir! He sold his soul to get a vote

Biden, Pelosi and a new one from California Xavier Becerra running for Health ?? says he is also a Catholic , but in name only like the other two. He is for abortion, lies, is evil and corrupt. He was our AG in California
and knows absolutely nothing about the Health field. His father is a US citizen but went to Mexico to get mama so I question his citizenship. Becerra was born in Sacramento. The biggest thing about this corrupt politician (check is corruptness out) is that he doesn’t respect our Constitution! This creep shouldn’t be Biden’s Cabinet? Although he would fit in good as they all are criminals!