Pope in Iraq: Violence, ‘Shedding of Blood’ Are ‘Incompatible’ With Religion

Home /International/Pope in Iraq: Violence, ‘Shedding of Blood’ Are ‘Incompatible’ With Religion 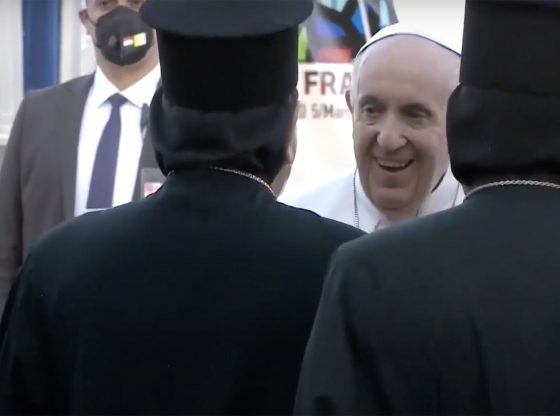 On his first-ever papal visit to Iraq, Pope Francis has been received warmly by the country’s president, Barham Salih. 10,000 Iraqi troops have been deployed to keep the Pope safe.

“But the Pope was seen to have a pronounced limp, suggesting that his sciatica condition continues to bother him,” according to BBC.

During a speech by the Pope, he said he was very pleased to come to Iraq, which he dubbed as the “cradle of civilization.”

“May the clash of arms be silenced… may there be an end to acts of violence and extremism, factions and intolerance!” he said.

“Iraq has suffered the disastrous effects of wars, the scourge of terrorism and sectarian conflicts often grounded in a fundamentalism incapable of accepting the peaceful coexistence of different ethnic and religious groups.”

“The age-old presence of Christians in this land, and their contributions to the life of the nation, constitute a rich heritage that they wish to continue to place at the service of all,” Francis said.

He added that Iraq’s diversity was a “precious resource on which to draw, not an obstacle to eliminate.”

The Pope then held Mass in Baghdad’s Syriac Catholic Church of Our Lady of Salvation. In 2010, the church was targeted in an attack by radical Islamic terrorists, which left 52 Christians and police dead.

According to the official Vatican news service, “Turning his thoughts again to those brothers and sisters who died in the terrorist attack in this Cathedral some ten years ago, and whose cause for canonization is underway, the Pope stressed that ‘their deaths are a powerful reminder that inciting war, hateful attitudes, violence or the shedding of blood are incompatible with authentic religious teachings.’”

Hypocrite…as he cheers for what is going on here in America, the RIOTERS Destroying anything and everything, attacking people-killing them with the APPROVAL of the so-called “vp”, and doing away with Christianity/our Religion here…!!! They are all USELESS/CRIMINALS….!!!

So tell me, is Joe Biden’s administration only supporting “Bloodless Abortions”?

Then HOW do you explain the Crusades, dummy? Many wars have been based on differences in religion and the Old Testament is full of them.