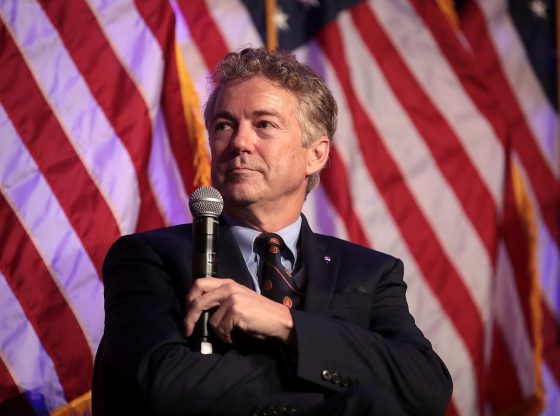 On Friday, it was announced that Sen. Rand Paul (R-KY), who is also a physician, had forced the Democrats to concede on their extreme COVID-19 pork bill and remove a provision allowing every Planned Parenthood across America to receive free money through the Paycheck Protection Program – money which was always intended for small businesses.

“Democrats knew this was never about COVID relief or helping small businesses,” said Dr. Paul. “It was a shameless attempt to fund their radical agenda on the taxpayers’ backs and I was successful in preventing that from happening by stopping these funds from going to abortion mills.”

According to Sen. Rand Paul’s Office:

Under the House passed version of the bill, individual Planned Parenthood locations would be treated as separate and distinct entities, being eligible for federal assistance under the PPP. The original congressional intent of PPP was to limit large and well-financed groups, such as Planned Parenthood from receiving a loan, and instead provide relief to small business affected by COVID-19. Democrats had planned to waive affiliation rules for nonprofits to provide paycheck protection loans to Planned Parenthood in the House version of the COVID-19 relief package. The Paul team strenuously argued to the Senate Parliamentarian that this waiver would only benefit Planned Parenthood and thus violated the so-called Byrd rule.  Before the Parliamentarian was able to rule on the arguments presented, the Democrats filed an updated version of the bill that did not include the offending provision – a concession that avoided setting a precedent.

Dr. Paul also said on Twitter, “Dems knew this wasn’t about COVID relief/helping small businesses. Shameless attempt to fund their radical agenda & [Planned Parenthood] on the taxpayers’ backs. I was successful in preventing that from happening by stopping these funds to abortion mills.”

Dems knew this wasn’t about COVID relief/helping small businesses. Shameless attempt to fund their radical agenda & @PPFA on the taxpayers’ backs. I was successful in preventing that from happening by stopping these funds to abortion mills. Read more: https://t.co/K37N8cIYl5

SICK: Abortion Is ‘Hilarious,’ Says ‘Shout Your Abortion’ Founder
Pope in Iraq: Violence, ‘Shedding of Blood’ Are ‘Incompatible’ With Religion

How about the funds going to bail out liberal states? , Need to be eliminated too.

If this part of the bill can be stopped, the whole bill could be defeated if all the republicans would grow a spine and stand up to the liberal, communist, biden and democrat regime
“WE THE PEOPLE” are disgraced and should be ashamed for not orginizing a march on washington demanding the reversal of these UNCONSTITUTION ACTS, THE BIDEN REGIME EXECUTIVE ORDERS AND ILLEGAL ELECTION.

Make the snow stop falling, we know it is not snow but the ashes of babies being killed every day. There are so many products on the market to help one from getting pregnant. Stop the snow from falling of the dead babies that are being killed. I would like to know why they called themselves planned parent hood clinics, when they are just the killing machines of innocent lives.

I heard Fr. Koskos powerful speech about the Jews’ bodies being burned in the crematoriums in Poland. How the sakes fell from the sky like snow. You are exactly right. We must stop the snow from falling. Stop Planned Parenhood and stop voting for Democrats.

THANKYOU…SENATOR RAND PAUL…YOU are HELPING to SAVE INNOCENT LIVES. From SamuraiQueen. 😄😄😄 OX. PS. I am VERY GRATEFUL.

Thank you and may GOD BLESS you Dr. Rand Paul.

Stop radical fraudsters dems on their tracks.
Don’t wait today MUST sue Nancy Pelosi for gross negligence causing the wrongful dead of Ashli Babbit in the Capitol riot, she was unarmed, who gave those orders to the the Capitol police to shot an unarmed person without first giving prior notice of that they will be shooting at them , violating the law.
No one is above the Law not even the POTUS, Nancy fired the experienced Capitol chief of police days before the riots and placed an inexperienced person to be in charge, refused the offer from the POTUS TRUMP to have 10,000 troops to stop riots in DC, there are multiple videos that show how the Capitol Police let the rioters in the Capitol and also guide them to the chambers then inside to ambush them and gun down an innocent person.
We The People want the Law to be upheld even to everyone, no one is above the LAW.
Now the say the Capitol police that shot Babbit is in hiding who is helping him to do so, and why they haven’t open an investigation!!!.

Senator Rand Paul is my new HERO!! This should NOT be forced upon those who don’t believe in it!! Thank you sir for fighting the good fight and helping save childrens lives even just a little. I wish it was morally seen for what it is. (murder) and outlawed except for endangering of mothers life (and that could be medically debateable) at times. So many want babies!!

Thank you, Rand Paul. I don’t know if you’re a Christian, but you are definitely fighting against the Devil.

Is Senator Rand the only voice ? Are there no there!