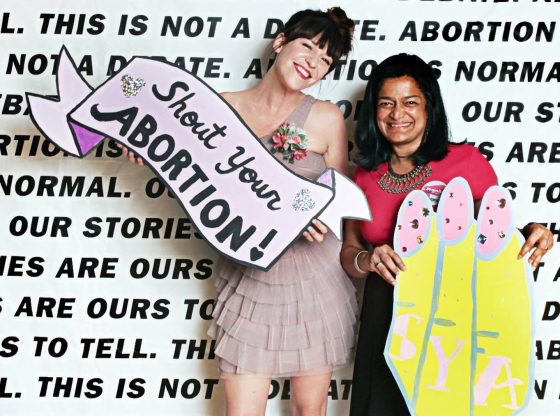 The founder of the extreme pro-abortion group “Shout Your Abortion,” Amelia Bonow, is making headlines again after hiring a pro-abortion “Tik Tok” personality going by the username “AbortionQweenn.”

According to Live Action:

A 21-year-old woman who goes by the username “AbortionQweenn” has racked up millions of views by posting videos of herself at doctor’s offices, pretending to get abortions. She, along with her live-in girlfriend, “AbortionCounselor,” both work in the abortion industry and regularly post fake abortion videos, openly designed to offend people.

“I just started posting videos of me at random doctor’s appointments and saying ‘I’m getting an abortion,’” she said in an interview with the Daily Beast. “I was at urgent care.” For her, it was more than just a way to push a pro-abortion agenda — it was a way to get instant hits.

“I think a lot of my followers know that I’m not getting like 50 abortions a month,” she said. “But people will just see that and I guess like normalize it. People will also get very angry about it. But it always goes viral.” The videos posted by the two women were deemed “playful” by the Daily Beast — with jokes about fast food after abortion, dancing in doctor’s offices, and sneering about a preborn baby dancing in the womb before being aborted.

The irreverent and tasteless viral videos quickly got noticed by Bonow, who hired “AbortionCounselor” to be the artist-in-residence for Shout Your Abortion. “The idea that abortion is always a serious and sad thing is antiquated, not reflective of reality, and it definitely hasn’t done our side any favors,” Bonow told the Daily Beast, claiming that abortion on TikTok “is a nail in the coffin of the old way of doing things. We can talk about abortion however we want, it doesn’t always have to be heavy. Sometimes it’s hilarious.”

Although pro-abortion extremist Amelia Bonow thinks killing babies in the womb is “hilarious,” to children in the womb being ripped apart limb from limb, it certainly is not.

Shout Your Abortion compiles stories of women who have had abortions and even sells greeting cards that read things like “Congratulations on Your Abortion,” as if killing a child is something to celebrate.

This is just pure evil on display.

Those who kill babies, have no right to breathe.

LISTEN UP….ABORTION= Throwing a BABY OUT …With the BATHWATER. A FETUS BLeeds. ANYTHING that BLEEDS…Can FEEL PAIN. ADOPTION is BETTER than MURDER. I am GLAD MY MOTHER Kept ME and Later I Was ADOPTED. From SamuraiQueen. 😄😄😄

All I can say it’s a good thing your not my daughter!

They should have been aborted!!!! That way we wouldn’t have this craziness!!! Morons. All for likes 😡😡. This is coming from the pit of hell!!! Pure EVIL!!!

It was too late the minute these creatures hatched. If they had been ABORTED B4 they saw the light of day, there would B no problem today.

I do believe that “hilarious laughter” will cease when they see the Real King of Kings and Lord of Lords ride in! The Lake of Fire can handle all these evil souls and they can gnash their teeth for eternity for murdering defenseless babies!

Actually, they wont bust hell wide open for their deeds, but rather rejecting the free gift of salvation. All of us, saved or not deserve judgement, saved means saved from judgement. Thank you Jesus.