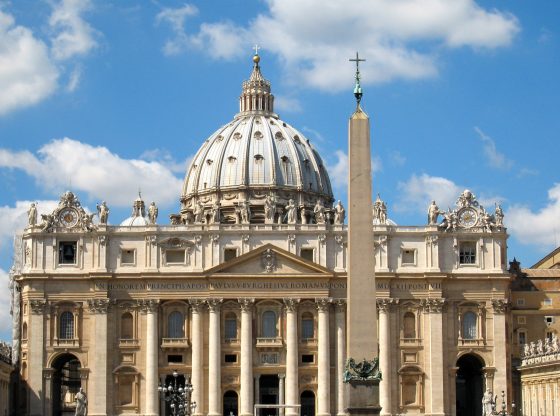 On Monday, the Vatican released a shocking and rare statement denying Church blessings for civil unions between same-sex partners.

A note from the Vatican, which was approved by both Pope Francis and the Prefect of the Congregation for the Doctrine of the Faith, Luis Francisco Ladaria Ferrer, notes that, “it is not licit to impart a blessing on relationships, or partnerships, even stable, that involve sexual activity outside of marriage (i.e., outside the indissoluble union of a man and a woman open in itself to the transmission of life), as is the case of the unions between persons of the same sex.”

“Furthermore, since blessings on persons are related to the sacraments, the blessing of homosexual unions cannot be considered licit, as it would in some way constitute an imitation or reference of analogy with the nuptial blessing, invoked on the man and woman who unite in the sacrament of Matrimony, given that “there is no foundation for assimilating or establishing analogies, not even remote, between homosexual unions and God’s plan for marriage and the family.’”

“The Christian community and its Pastors are called to welcome with respect and sensitivity persons with homosexual inclinations, and will know how to find the most appropriate ways, consistent with Church teaching, to proclaim to them the Gospel in its fullness. At the same time, they should recognize the genuine nearness of the Church – which prays for them, accompanies them and shares their journey of Christian faith – and receive the teachings with sincere openness,” reads the letter.

The letter reads that God “ neither blesses nor can He bless sin,” adding, “For the aforementioned reasons, the Church does not have, nor can it dispose of, the power to bless unions of persons of the same sex in the sense understood above.”

According to the Associated Press, the response from the Vatican “was an apparent reference to the German church, where some bishops have been pushing the envelope on issues such as priestly celibacy, contraception and the church’s outreach to gay Catholics after coming under pressure by powerful lay Catholic groups demanding change.”

The note pleased many social conservatives while it angered liberal Catholics. What is your opinion of the statement from Pope Francis?

In the site of God marriage is between a man and women only.

It’s time the Vatican reminds catholics the teachings of christ. Marriage is one man, one woman period. The Bible forbids homosexual marriage. With the lack of morality in the world no wonder we have so much turmoil, fires, storms, crime and hate.

It’s about time the church spoke on this. This was clear and concise – no ambiguity. Now pray mightily for the church as it will be attacked like never before.

Because a certain group or groups scream and shout for “change”, doesn’t make it right in the eyes of God. When things don’t go thier way, thats when the words racist and homophobic are introduced to the conversation. I agree with the church. Now it’s time for gays and lesbians to denounce religion as this will be thier only recourse.

Denouncing religion is not their only recourse. There is such a thing as conversion, denouncing son!

Or, how about denounce then renounce their sin, THAT is their only recourse.

For once this Pope has done something right. “Therefore a man shall leave his father and his mother and hold fast to his wife, and they shall become one flesh. And the man and his wife were both naked and were not ashamed.” Genesis 2:24-25

Happy that the Vatican didn’t give in to those groups. I wholeheartedly believe marriage is between one man and one women. Thank you Lord!

It also states in the Bible:

Jeremiah 1 1
“Before I formed you in the womb I knew you, before you were born I set you apart; I appointed you as a prophet to the nations.” “Ah, Sovereign LORD,” I said, “I do not know how to speak; I am only a child.”

So if God knew us before we were born, He also knew what
Kind of person we would turn out to be. I agree that marriage
should be between a man and woman. But He also knew there would be men attracted to men and also with women. So which is it? There were gays way back in biblical times also. These ppl are very much Christian as anyone else. They didn’t want to be this way but they are. Do we condemn them because of what God knew they were going to be? In truth everyone has a family member that is gay. I have cousins, nieces, nephews that are. I love the for who they are. If it had been 1 of my kids I would still love them. I’m not saying it’s not wrong for 2 men or even women being together but according to the Bible God knew it could happen. I know there will be many that will tear me over the coals. That’s ok. I’m just stating what I read in the Bible also. Only God really knows what is right with these individuals. Only God decides who will be let into Heaven. After I hit the post button, I never look at them again. I’m not saying it’s right or wrong because it’s not my place as a human, only Gods.

You have got all you thoughts wrong in that you have forgotten that satin came into the picture as God knew he would, God never stops a person from doing what they want to do even though He will try to talk to that person to stop them from doing wrong but on the other hand you are on your own and he lets you go ahead and do it to teach you a lesson . That is what happened to Trump. He didn’t do what God wanted do him to and it came back to bit him . As we all knew Trump has a mind of his own and would not take other peoples word like he know better then they>

What is it you are saying Trump did wrong, or did not do that angered God?

No one is saying we shouldn’t love gays. In fact, the letter states that we should. The letter is merely stating that the Church cannot bless a union between same sex people. I don’t think that should be an issue. If someone doesn’t agree with the Church’s teachings, then maybe they are in the wrong church, or maybe they need to rethink things. And it is not the job of the Church to go along with being politically correct just because some people want them to.

It matters not what the “Church” says, it matters only what the Word of God says.
Do not conflate the two as being equal in authority.

Liberals are not God. Get over yourselves.

I don’t question their motives or their love in same sex relationships but have to agree with the churches reluctance to sanction it. They are free to deny Gods teachings. He gave us all freedom of choice.

But they want al of us to believe it is okay and fund their cause. I don’t. I still think they are sick !

God’s WORD is the Truth for ALL!
No sugar coating it !
No adding to change for our on self defense
It Is what it Is !!
Once you except Jesus as your personal Savior
Gods Word is written ( John was baptized by water but I baptize You with the Holy Spirit.
Jesus is the truth the way and the life .

About time they spoke up. They also need to speak up about this pro abortions called Catholic President.

If the pope backed homosexual unions most Catholics would abandon the church. It is not right and no amount of wokeism is going to change that. I have had many gay friends and liked them, I do not favor any harm to them and would not endorse any. But the militant LGBT are not doing any good for gays, they are forcing people to agree with their lifestyle or they will attack you. Not helping morons.

How can we argue with the Word of Truth, written by men who were inspired by God to write what was written? We all are sinners but that does not give us freedom to go on sinning. On last day, we will all have to give an account to God Almighty Who in His Grace will help us fight off the Devil, World and our Flesh. God is a Just God. He does punish evil.

I have friends who are Homosexual, but I agree with the Pope (on this problem. The church cannot bless or condone homosexual marriages. Whether this is a choice or a misinterpretation of a person’s choice/ideology. It may be best if the homosexuals formed their own church. I would say Biblical based, but that is not possible with the lifestyle they have chosen.

this backs up what I’ve thought I’ll along. The gay world did not need to purloin the Terms marriage , husband, and/or wife. That was an offensive mistake, to me.
I have always known and been friends with gays , and acknowledge that proclivity,AND their human-ness. But it is not the mainstream of nature….which is exactly what this papal paper says. ‘Partners with legal privileges’ was a very sound way to go. Different types of ceremonies could have been employed. Look how we ‘christen’ ships. How we sanctify inter-country ally relationships, , How sports teams acknowledge their ‘brotherhood’, and celebrate it. Even how wakes are more of a celebration in some cultures.

No, the misappropriation of the marriage terms was the way gays demanded their sameness in humanity to heterosexuals. .
But at the same time they proclaim and celebrate that they are different. So why use the historic vocabulary of those whom they are different from..

What is ironic, is that the press is now speaking of traditional marriages by calling that
twosome ‘partners’. No. They are husband and wife.

Gay unions are what they are .
Partnerships. If there is a better word, then let it be coined. Their partnerships are unions. Going to a ‘Domestic Union’ Could be as equally happy an invitation as an invitation to a wedding. We all want each other to live in domestic bliss.

But please .. let’s identify and correct the words that fray and irritate our traditional understanding. … and thus in the wrong way, separate us.

He stood up to the satanic realm and told them that the church will not bend to their stupidity and will follow the BIBLE under GODs law not some idiot Satanic state as they do in America and call it a religion .

IT’ ABOUT TIME, IT TOOK THEM LONG ENOUGH.

At least there is truth and common sense at the top leadership of the Catholic Church! I wish that they would take stronger action to stop abortion which is nothing less than infanticide and murder if the innocent unborn.

It was time to set the matter straight! Now, when will Pope Francis comment on President Biden’s liberal stand on abortion !! All I hear are crickets!

God doesn’t hate the sinner. He hates the Sin
The word of God has been used as the guide of living a life. These are his words. No man or woman has the power to allow sin and say it is right.