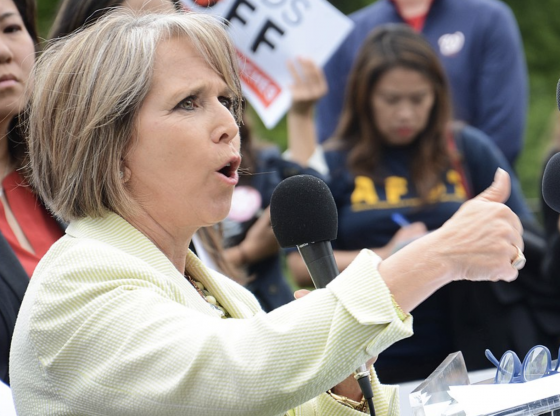 On Thursday, New Mexico Gov. Michelle Lujan Grisham signed an extreme assisted suicide via lethal drugs bill, H.B. 47, into law, which lets medical professionals prescribe lethal drugs to patients who have been diagnosed with a terminal illness that could take their lives anytime up to six months.

“The bill would legalize doctors to prescribe a ‘cocktail’ of lethal drugs to patients suffering from terminal illnesses, which will save insurance companies money,” one report notes.

“Dignity in dying — making the clear-eyed choice to prevent suffering at the end of a terminal illness — is a self-evidently humane policy,” Lujan Grisham said, Sight Magazine reports.

But others described the new law as the “worst in the nation,” noting how the elderly and people with disabilities could be coerced into killing themselves.

The law allows a person to request lethal drugs from a doctor, nurse practitioner or physician assistant to commit suicide. Under the law, assisted suicide is supposed to be limited to people who have six months or less to live, though doctors admit that predictions about such things are often wrong.

The New Mexico law only requires people to wait 48 hours to receive the lethal prescription; in most other states where assisted suicide is legal, the waiting period is 15 days, according to the report.

Pro-life advocates, disability rights groups, religious leaders and others united in strong opposition to the law. They said it has very few safeguards to protect vulnerable people who may be contemplating suicide.

“… legalized assisted suicide in any form will only make it even harder for people with disabilities, people of color and the economically disadvantaged to obtain quality medical care,” said Matt Vallière, executive director of the Patients Rights Action Fund.

Vallière said the law allows discrimination against people with disabilities and pushes them toward death rather than medical care.

Catholic leaders in New Mexico, including Santa Fe Archbishop John C. Wester and the New Mexico Conference of Catholic Bishops, who opposed the bill, called it the “worst in the nation.”

“This as we struggle to dissuade our young people from taking their lives when they are struggling with depression and despondency. With these bills, I wonder, what have we become?” Wester said in reference to both the assisted suicide and abortion laws.

Lets assist her in her suicide for her crass attitude toward life. We the people have determined she’s terminal, get her.

A few years down the road, the restrictions will be lifted, and just like abortion, it will be suicide on demand. And worse yet, doctors having bad days, like these unstable killers out there, will make bad decisions ending people’s lives for the wrong reasons.

We knew this was coming, when they enact universal healthcare they’ve got to get rid of the people they consider a burden. And since there’s abortion on demand because babies can be inconvenient, why would they care about elderly people?

Just think most insurance companies do not pay for suicide. The SS gets off not paying for added years or even months if the person lives. young people get their Inheritance early.

ANOTHER ” DEATH MERCHANT HERE! ” THIS GIVES THE DR’S THE CONTROL OVER THE PATIENTS RIGHTS AND FAMILY RITES!

Only God has the right to take our life

When are the Democraps going to line up to demo this to the rest of us? Sounds like the NAZI rounding up all the undesirables before WWII and killing them off for whatever reasons. History is trying to repeat. Now it’s the Democrap party. GOD is taking notes and I would not want to be any of them when they meet GOD some day. I don’t understand why they want to be so ruthless except to reduce population down to 550 million for the NWO / U.N. Abortions are preventable. Keep your knees together and your pants on. Simple enough. STOP letting the little head do the thinking for you. GOD told Adam, I’m going to give you a Brain and a Dick, BUT NOT ENOUGH blood to run both at the same time. Some day they will be sick and old, they will get a dose of their own BS as they are lead to the “Death Chamber” Bet they will have to be dragged, kicking and screaming.

Years ago after my mother was diagnosed with throat cancer, the doctor gave her 6 months to live, and she lived in her home eight more years. The wrong counselor at such a tough time in life could guide a lot of people to suicide.