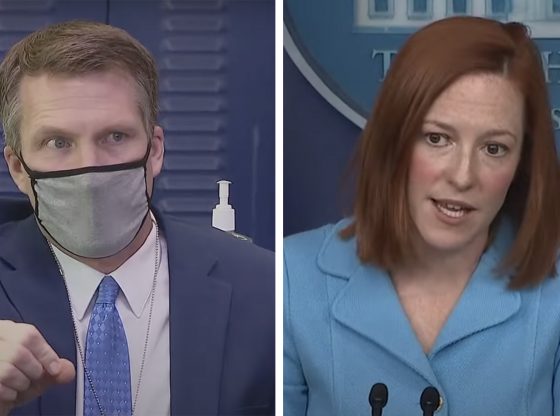 During the President Donald J. Trump administration, Title X, which is a program relating to family planning, cut out abortion and abortion referral from the services afforded under the program.

On Wednesday, the Joe Biden administration announced that the program would resume funneling millions of dollars in funds to pro-abortion outfits like Planned Parenthood which would make American taxpayers fork over funds for abortions.

During a press conference with Joe Biden’s press secretary Jen Psaki, EWTN reporter Owen Jensen questioned her about Biden’s efforts on multiple fronts (including Title X and the Hyde Amendment) to force American taxpayers to fund abortion. He asked, “Why does the Biden Administration insist that pro-life Americans pay for abortions and violate their conscience?”

In May of 2018, the Trump administration instituted a controversial rule change that required any entity receiving Title X family planning funding to separate its abortion-related services from family planning services both fiscally and physically. Planned Parenthood chose to walk away from the program instead, giving up approximately $60 million in funding. This week, the Biden-Harris administration released its proposed change to the rule (with a time for comments to be filed regarding the rule change), which would rescind all pro-life changes made by the Trump administration.

In reference to this, EWTN’s Owen Jensen questioned White House Press Secretary Jen Psaki about the Biden administration’s efforts on multiple fronts (including Title X and the Hyde Amendment) to force taxpayers to fund abortion, asking, ”Why does the Biden Administration insist that pro-life Americans pay for abortions and violate their conscience?”

Psaki attempted to deflect, quoting the Public Health Service Act, to which Title X is an amendment, which states: “None of the funds appropriated under this title shall be used in programs where abortion is a method of family planning.”

Jensen, however, countered by pointing out something Live Action News has noted before — “Indirect subsidies – money is fungible and can’t be traced — we know that, come on.”

Psaki’s next claim was perhaps less believable than the first: “The reason why the president took these steps is because he believes that advancing equity for all, including people of color… can be helped by these actions…”

Again, Jensen did not allow the claim to pass unquestioned: “You talk about equity, if I may interrupt, how is it equity, how is it fighting systemic racism, when abortion, we well know, disproportionately affects minority children?” In clearer terms, Jensen is asking how promoting the killing of minority preborn children is helping to advance “equity” — and he’s really already answered the question: it doesn’t.

A recent Marist poll found that a majority of Americans do not want to be forced to pay for abortions, with thirty-one percent of Democrats saying they oppose federal funding of abortion.

She sure has her LIES down pat !

How much did her nose grow ?
﻿
She is an accessory to MURDER !

“equity for all, including people of color”, shouldn’t that include born and unborn black babies?? This “Equity” really isn’t equality in ANY sense of the word! There’s no doubt this is one of the most murderous Administrations we’ve ever had, and they’re just getting started!

Any politician that claims they are personally opposed to abortion but won’t let that stop others from “CHOICE” are either liars or COWARDS, who sell their souls for votes, Biden, Casey etc will have to look at the face of GOD and answer for the murder of babies. Don’t know a single democrat worth voting for, total scumbag murderers.

Twitter. Usual the demorats are trying to control minority population through abortion. It never stops with their racist antics.

This proposed Biden administration change is nothing less than an outrage. Once again, Biden disregards the will of reasonable minds. Its definition of “equity” doesn’t reasonably override the First Amendment protection of religious freedom.

“I think I’ve answered your question.”…Well, Jen. You thought wrong.

Everyone knows that PLANNED PARENTHOOD STARTED TO CONTROL THE BLACK BIRTHS!
The DIRTY BIDEN ADMINISTRATION wants to keep that going!
ABORTIONS ARE NOT BIRTH CONTROL! IT’S TO CONTROL THE BIRTH RATES OF BLACK PEOPLE!
It’s nothing more then MURDER! People should not be FORCED to pay for something they don’t believe in! DIRTY IS A GOOD CATHOLIC NOT!

How stupid does this bit// think we are. Good lord she talks like Biden who hasen’t had a correct thought in months.

That’s what habitually lying does, it eventually makes anybody who does it all the time demented and insane! You cannot go against God’s Will and not expect mental, physical and spiritual repercussions!

You think that is bad? Do you know in some states a woman can have an abortion up to delivery time? If the baby survives the abortion and the mother does not want it the baby is set aside to die. Republicans have proposed several bills to stop it but DEMs stop them.

Biden-harris you are liars, but that’s nothing new now is it, my choice not yours I don’t give a flying fig who you think you are, you have no right to use taxpayer money for your murders, got it MURDERS! Remember the motto black lives matter, well do you cause your Murdering Black Babies, Hispanic, Muslim, and Asian Babies All minority’s, that make you both HYPOCRITES and Racists!!!

2022. VOTE. REPUBLICAN and Vote in person, DO, NOT TRUST. The POSTAL SERVICE or DROP BOXES for ELECTIONS

At the rate this group of Criminals is advancing the DESTRUCTION of America, I don’t believe there is really anything you and I can do at this point but have faith that GOD is about to step in with DEVINE INTERVENTION. I think the best part will be watching the Atheists try to explain it all away.

And they will definitely try to explain it away any way they can! Hasn’t anybody noticed the proliferation of supposed UFO sightings? I have a feeling that’s how they’ll explain away the Rapture… aliens did it! It will make perfect sense to a left behind, weak-minded, easily deceived population. Not to mention, the Antichrist will be one of the most believable Liars to ever exist!

Well stated. You obviously have read and believe Scripture.

“equity for all, including people of color”, shouldn’t that include born and unborn black babies?? You know this “Equity” really isn’t equality in ANY sense of the word! You know, is the most murderous Administration we’ve ever had!

What are they telling, the “child stars” have been sexually abused to get the gig, instead of fight the abuse they embrace it and become an abuser as well, that is why they hate TRUMP, he was taking down all the pedo rings now that they fraudulently got him out with the election fraud, the open border unaccompanied minors are refilling dems pedo rings, they are not being reunited with their family, they are being hoarded by dem Congress Mike Levin and San Diego Board of Supervisors Nora Vargas, girls 12-17years some already pregnant to the San Diego Convention Center from Texas instead of taking them to their family, the dem are stocking their prostitution pedophile rings the latest news is they are also going to Los Angeles and the human trafficking task force in California is being defunded check video “Uncovering Human Trafficking in California | Greg Jones”.
When is hunter going to confess he also was abused.

What can I do as a concerned citizen to protest this decision & possibly reverse it along with all other right-to-lifers?

How can we expect people without the Spirit of Truth in them, understand Truth?