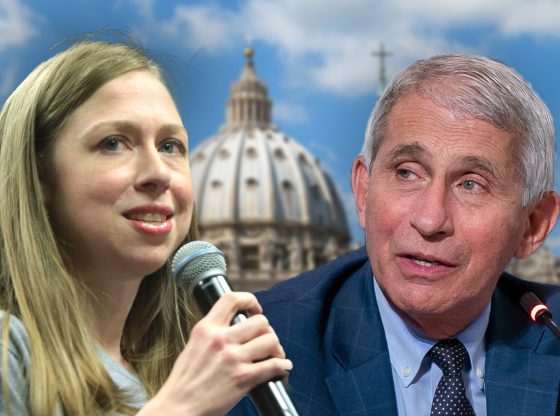 On Thursday it was reported by CNS that Dr. Anthony Fauci of the National Institutes of Health and Chelsea Clinton, daughter of former Secretary of State Hillary Clinton, would be speaking at the Vatican for a conference “on the interplay of mind, body, and soul in healthcare.”

It will feature the CEOs of large pharmaceutical companies, including Moderna and Pfizer, along with celebrities active in medical philanthropy, global health advocates, policymakers, physicians, and religious leaders.

Clinton is an extreme pro-abortion proponent, where she previously claimed preventing the child-killing procedure is “un-Christian.”

“That’s unconscionable to me, and also, I’m sure that this will unleash another wave of hate in my direction, but as a deeply religious person, it’s also un-Christian to me,” she said.

Fauci announced Joe Biden’s anti-life policy of rescinding the child-saving “Mexico City Policy,” meant to keep American taxpayers from funding abortions overseas. He said, “It will be our policy to support women’s and girls’ sexual and reproductive health and reproductive rights in the United States, as well as globally.”

Liberation Theology has taken over the Vatican

The Pope is a socialist!

A new twist on an OLD joke, “Two Satanists walk into the Vatican…”

Fauci and Clinton get rich off the backs of Americans. They spew hate and abortion to control the minority population. That has been the demorats main way to keep minority people from seeing them for what they have always been, racists. Think kkk, Jim crow and slavery they were and are the product of demorats.

The welfare system created by Democommie President L. B. Johnson is the modern day slave plantation. The abortion organization Planned Parenthood was founded by Margaret Higgins Sanger who was a staunch racist that openly wrote and voiced her belief that whites were superior to other races and promoted eugenics to eradicate non-white races via forced contraception, forced sterilization, and abortion. The southern Democrats were the proponents of slavery, the KKK, segregation Jim Crow laws and other racist policies.

And now Democrats are offering reparations, the new welfare to keep blacks on the plantation… Until there’s no more money, then they’ll simply shrug their shoulders and say, “Sorry, no more”, after they’ve gotten their votes…

She has learned well from Mommy Dearest how to ignore and pretend.

We should not write that anybody should have been aborted. If the Creator and Ruler of the universe saw fit to bring about the conception of another life in His image, that life should be protected until natural death. If that particular person participates in or advocates for grave moral evil, warning that person of the consequences of his or her actions is in order, but we must not wish death on anyone.

Yes, the evil and demonic beast of the land is holding a satanic conclave of demons in Christs church! The end for them all is very near!

In my native country we use to say: “it’s NOT the swine’s fault; blame whoever feeds it”. And who do you think is feeding these swine? Yes; you got it. Terrible.

That the Vatican would even let these two speak at their conference kind of tells us where the false prophet will come from.

Biden may actually BE the false Prophet. What better way for The Anti-Christ to conceal himself than as a doddering old fool. If he were some good looking guy with a velvet tongue but still making the moves he’s making the People would KNOW that these were not simply mistakes but the INTENTIONAL destruction of America. Instead he buys time knowing that many will think he couldn’t POSSIBLY be the Anti-Christ. But SATAN IS CUNNING. I’m NOT saying that Biden IS the Anti-Christ only that he COULD BE.

Anti christ is Obumturd. Said that years ago.

Definitely one of Satan’s agents!

Hillary made that decision when she joined the ranks of Saul Alinsky who dedicated his book “Rules for radicals”to Lucifer. —- well that evil man is now in hell with The Devil 👿. The time to find out about hell is not after you arrive there.

Glad I’m not only one who knows Alinsky‘s book is the Soros, Obama, Clinton and DNC Bible.

Tells you what an ignorant loudmouth twat Chelsea Clinton really is and that it has no idea of the Bible and GOD’ s Words .

Last two that need to be at the vatican.

If having someone who supports the murder of children and another who has engineered and released a virus that has already killed at least a Million People speak at their conference, is there really any question about Satan’s relationship with the new Pope and the Catholic Church?

The pope is satan and the Vatican should be destroyed

God is going to crush these two and all the rest of them one day. They will all burn in hell and I pray the sooner the better….

Is it possible to have a second “Pope Emeritus”? Just asking….

The evil and wicked demonic beast of the lans Jorge Mario Bergoglio is holding a satanic claven in Christ church!
So Chelsea is distraught over her mother’s guilty conviction and death sentence?

lans Jorge Mario Bergoglio is a socialist from Argentina and has argued against free capitalism. He dared to take the name of the most excellent Francis of Assisi. What a hypocrite!

What credentials does this Clinton have to talk about anything. Another grifter. Can’t they just slither away quietly?

Who cares what Clinton has to say. What makes her an authority on anything. Nepotism at its finest.

NOW there TWO that should have been ABORTED for the betterment of the world. Maybe it’s not too late now?

What a hypocritical Apostasy! They should not even be allowed to enter the grounds!

How can our Pope allow Dr. Fauci and Chelsea Clinton to speak at the Vatican Health Conference. Disgusting !!

What does Chelsea have to contribute to any discussion. What is her background besides being the daughter of two lying grifters.? Can’t the Clintons just go away already!!

Laity MUST stand your ground for what is true and right! We are to be IN the world but not OF the world! The church is becoming secular like the culture. This is happening in more denominations besides Catholicism. 😢