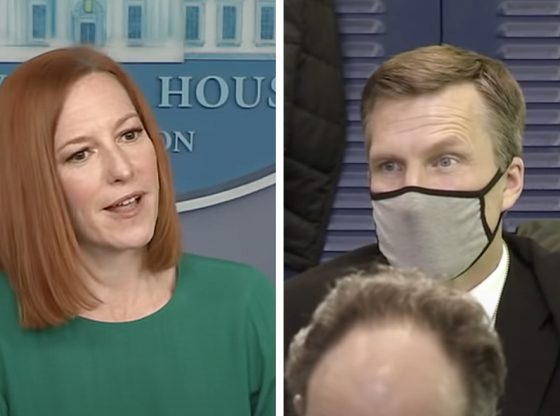 “As you well know, the administration just lifted the ban on researchers using fetal tissue from elective abortions,” Jensen said. He cited a statement of the U.S. bishops’ conference that the decision to lift the ban and allow for taxpayer-funded research with aborted fetal tissue was “deeply offensive.”

“Look, I think the White House respectfully disagrees,” Psaki said in response. “And we believe that it’s important to invest in science and look for opportunities to cure diseases, and I think that’s what this is hopeful to do.”

Also during the press conference, Psaki refused to say whether Joe Biden would pick a pro-life U.S. ambassador to the Holy See (The Vatican).

Joe Biden proclaims to be a “devout” Catholic, however, his move to defy the U.S. Conference of Catholic Bishops’ (USCCB) stance on aborted human fetal cell tissue research with “respectful” disagreement worries Catholics across the country and world.

In response to Biden’s decision to allow more human fetal tissue research, Archbishop Joseph Naumann of Kansas City, Kansas, pro-life Chair of the USCCB’s Pro-Life committee said, “The bodies of children killed by abortion deserve the same respect as that of any other person. Our government has no right to treat innocent abortion victims as a commodity that can be scavenged for body parts to be used in research.”

“It is unethical to promote and subsidize research that can lead to legitimizing the violence of abortion,” Archbishop Naumann stated. “It is also deeply offensive to millions of Americans for our tax dollars to be used for research that collaborates with an industry built on the taking of innocent lives.”

LISTEN U P…ALL FETUSES and BABIES Deserve a DECENT BURIAL. ASK YOURSELF this QUESTION….I S This the WAY I WANT to Be TREATED…if that FETUS or BABY Were ME???? From SamuraiQueen. 😄😄😄

Any bishop giving this man communion should be defrocked.

What a laugh and lie. If Biden is a devout Catholic then he would of rejected many wrongs that he and the US government are pushing for. Like gender confusion. Forcing and teaching this to kinder and up. Forcing this on all population and putting hate laws against about those who do not accept this wrong. There are many, many wrongs this devout Catholic puppet mr biden and his minions are doing to destroy USA 🇺🇸. And many of his wrongs are against God and nature. God said he will not be mocked. Watch out USA our days are numbered.

Possibly TRUE, but with terminal Alzheimer’s Disease Joe Biden won’t be on terra firma too much longer before he makes the short trip to hell!

Biden etal are murderers and have admitted such. The catholic church doesn’t need any of them.

So now, aborted babies are the same as lab rats!!! Disgraceful.

Maybe we should use registered Democrats, since they ARE like lab rats!

Maybe we need to do brain experiments on Biden and Psaki to see why they are deficient in intelligence. It would be in the interest of science of course.

If the Catholic Church would have spoken up in the first place this wouldn’t be happening. The Pope needs to speak to the ends of the earth regarding this issue. A Catholic president not defending the unborn is unacceptable

You “forget” that the Communist Pope, Pope Francis is NOT really a Roman Catholic!

LISTEN UP…I ASK EVERY AMERICAN this QUESTION….HOW Would YOU LIKE it if YOUR MOM ABORTED YOU??? ONLY those Who were NOT ABORTED Can ANSWER this Question. From SamuraiQueen. 😩😩😩

Respectfully? There is no respect when you are murdering the unborn human!

Killing a someone is murder no matter how you cut it.Abortions are genocide.Millions of uborn babies have been killed in the most hideous way.Greed and money are the basis for their actions.They are doing the devils work and will at sometime have to atone for this.

So the Biden Administration is now an expert on Catholic theology? Really? Biden apparently doesn’t even know that the Church to which he claims to be “faithful” is opposed to abortion and other murders.

Psaki you can disagree all you want Biden’s regime is pro-genocide of human life, and your a piece of garbage I pray to God you have no children for their sakes, your a sorry excuse for a human!

So unplanned murder inc, why don’t you round up some of your dumborat friends and experiment on them especially Biden, Harris, PILLOUSER they have no major brain cells left anyway! GENOCIDE Biden Regime, kinda has a ring to it huh! They are what they destroy!

Proverbs 21:2 says, Every way of a man is right in his own eyes: but the Lord ponders the hearts. People are well able to rationalize anything they want to do. But what they are never able to do is to make something that is evil, right in God’s sight. Neither the President, nor the Legislature, nor even the Supreme Court has the last word on abortion. We as a nation had better now, rather than at the Judgment, agree with the only One who has the final word.