Catholic Nun: Pro-Lifers Must be ‘Battle-Ready’ and ‘Soldiers for Christ’

Home /National/Catholic Nun: Pro-Lifers Must be ‘Battle-Ready’ and ‘Soldiers for Christ’ 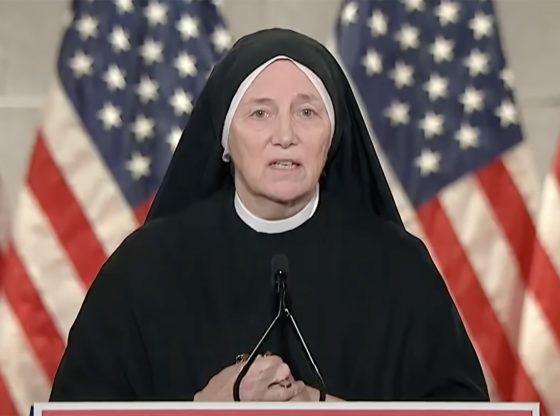 Sister Dede Byrne, a member of the Little Workers of the Sacred Hearts of Jesus and Mary, a surgeon, and a retired colonel in the U.S. Army, said Catholics must be “battle-ready” to defend the family and their faith. She serves as the superior of her community and works at a medical clinic in Washington, D.C.

According to the Catholic News Agency:

“We have to be prepared, battle ready” as “soldiers for Christ in this dark time, where every day, things seem to be ramping up about things that are against the family and faith,” she said to the 50th annual conference of the pro-life group Heartbeat International; the conference was held in-person and streamed online for attendees.

“This battle we face is not a battle between Republicans and the Democrats, it’s not conservatives or liberals, or left versus right,” said Byrne. “This is a battle between the devil, who is real, and Our Lord.”

Byrne said that Catholics must “fight with love” and continue to pray for elected officials.

The Biden administration recently suspended regulations of the abortion pill regimen during the pandemic, allowing for it to be prescribed and dispensed remotely instead of at a health clinic setting as previously required.

“We have to pray for these people because their soul is in a mortal state,” she said of pro-abortion elected officials.

Abortion, however, is “the greatest” inhumanity,” she said. “It’s really bad because people don’t even think about it anymore, it’s become a natural thing.”

Catholics will be forced to take a stand and “pick sides” in the figurative battle, she said. “We know that God is in charge and that He’s far greater than the devil,” said Byrne.

Byrne spoke at the 2020 Republican National Convention in support of the 45th President, Donald J. Trump.

THANKYOU….SISTER BYRNE. YOU are an INSPIRATION and a TRUE Servant of GOD. From SamuraiQueen. 😄😄😄

“May GOD Bless and keep you Sister Byrne, in Jesus’ name, Amen.”

Makes me wonder if there is a Catholic authority who Joe respects that could speak some sense into what’s left of Joe’s intellect. There will be a price for Joe to pay that he should understand—a price he really does not want to pay— but he will. Abortion is Satan’s bidding and our downfall IMO.

Anyone that is funded by Planned Parenthood to run for office and pro choice politicians should not take communion or call themselves Christians, did Jesus said, ” hey guys my body my choice lets all pitch in to have an abortion” NO where in the Bible.

Yes indeed Sister Byrne and Amen! These demons will all be destroyed very soon!