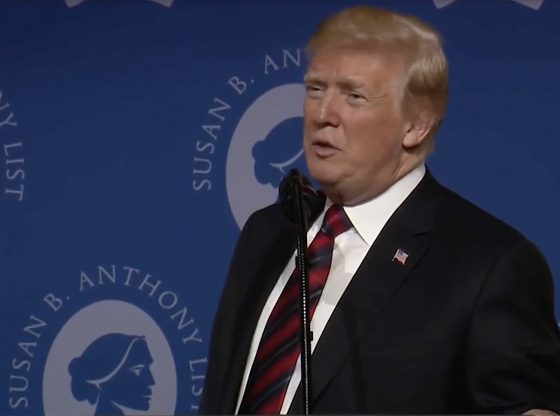 On Monday, President Donald J. Trump addressed Susan B. Anthony List pro-life group for their annual gala, which was held at the Breakers Hotel in Palm Beach, Florida. The event was closed to the press, but Mollie Hemingway, a frequent Fox News guest, and editor of The Federalist gave some insights on what happened at the pro-life banquet.

He just pointed out that VA Gov. Ralph Northam got in more trouble for blackface than he did for saying babies who are born should be allowed to die if mother chooses, and that he thought that was opposite of way it should be.

Trump is joking about how large Pelosi’s mask was the other night. Said he’d never seen anything so big. Says it hurts vaccine acceptance when Democrats wear bigger and bigger masks after vaccination.

It is “egregious” what the press do, he says. Notes disparate treatment of him vs, e.g., Joe Biden falling thrice climbing stairs to Air Force One, which was only lightly covered by corporate media.

Says Biden is one of most extreme and radical presidents we’ve had and he’s not even aware of it. Jokes that Biden wasn’t doing great, academically, even when he was in his prime.

Says companies will leave US if Biden continues with economic agenda.

Brings up@SBAList– and Trump-endorsed Susan Wright, who got top billing after Saturday’s primary in TX06.

He’s now condemning all of Biden’s actions in support of abortion, noting Biden was kept in basement for campaign, kept quiet about what he’d do.

Talks about how Democrats do a better job of sticking together, says he was dealing with senators begging for his endorsement, then undermining him. Names Romney, Sasse.

Joking about Biden wearing mask on that Zoom with world leaders, speaking in a muffled manner. “You couldn’t hear a word he said!”

Talks about media describing any and all concerns about election integrity as a “big lie.” Mantra they keep repeating. Says it’s actually the handling of the election that was a “big lie.” He put out a similar statement today.

President Trump has spoken at the Susan B. Anthony List before during his first term as president. He has been dubbed by many as the “most pro-life president in history.”

[READ NEXT: Biden Blasted by SBA List President for Ignoring Topic of Abortion at Congressional Speech]

Nancy Pelosi’s Archbishop Has Some BAD News for Her
Catholic Nun: Pro-Lifers Must be ‘Battle-Ready’ and ‘Soldiers for Christ’

LISTEN UP….AMERICA Needs PREZ TRUMP Back in the WHITE HOUSE. LOOK at ALL the CHAOS Going On. Four YRS of AMERICA/AMERICANS LAST with PREZ BIDEN. GOD HELP US!!! From SamuraiQueen. 😄😄😄

President Trump believes in justice and gets upset when it it thwarted, as he should.

Anyone that is funded by Planned Parenthood to run for office and pro choice politicians should not take communion or call themselves Christians, did Jesus said, ” hey guys my body my choice lets all pitch in to have an abortion” NO where in the Bible.