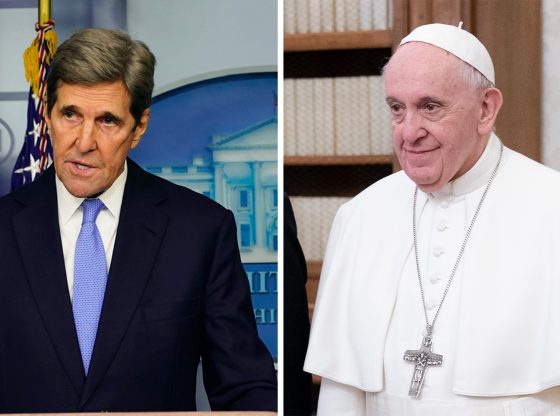 On Saturday, Joe Biden’s pro-abortion “climate envoy” John Kerry met with Pope Francis at the Vatican to talk about “climate change” ahead of the November 1-12 United Nations Climate Change Conference in Glasgow.

The Holy Father is reportedly considering attending the conference and local authorities are preparing the possibility of a papal visit for the event.

After the closed-door visit with the Pope, Kerry said, “His encyclical Laudato si’ is really a very, very powerful document, eloquent and morally very persuasive. And I think that his voice will be a very important voice leading up to and through the Glasgow conference, which I believe he intends to attend.”

“So, we need everybody in this fight. All the leaders of the world need to come together and every country needs to do its part. And I think, I think his Holiness speaks with a moral authority that is quite separate. It’s unique and we need all the power we can bring to the table.”

Ahead of his meeting with the pope, Kerry delivered a keynote speech at the “Dreaming of a Better Restart” conference, a closed-door meeting in Vatican City on May 14.

“Kerry, a baptized Catholic, previously met Pope Francis at the Vatican in 2014 and 2016, when he served as U.S. Secretary of State during the Obama administration,” wrote the Catholic News Agency.

Supreme Court to Consider ‘Most Important’ Abortion Case in ‘a Generation’
Pelosi ‘Cooperating With Evil,’ Says Her Archbishop

The pope should stick to the churches problems, not made up ones of the baby killers. Kerry is a proven liar and a joke.

note how the Pope got irritated when a good women touch him and let her know he had no time for her—-but he had all the time in the world for Marxist communist parasite. 🐍

Kerry should not be anyone News worthy. An untrustworthy liar and opportunist.

The biggest climate change took place when God shut the door to Noah’s Arc—- After which the rains came down and destroyed all wicked people—- mankind was given a chance with a clean slate to start over. An update on other claiming change disasters took place in Japan where underneath the service if the ocean plates shifted and thousands died___ think 🤔 on these things—-they make billons of dollars 💸 advocating climate changed —- money and greedy people started when Cain looked over Ables and with and excessive amount of envy killed his brother—- how is Kerry any different in his heart ❤️ if he actually has one—-

So the Vatican has hosted Anthony Fauci, Chelsea Clinton AND John Kerry recently. Makes one wonder about the goals and values of current Pope!?!

Teresa Kerry previously married to John Heinz. He was outstanding Republican, serving in the House and Senate. She really married ‘down’ with Kerry!

What does the Pope have to do with “climate change” ?
He should stick to Catholic Church issues, like abortion. To many American babies won’t get to experience “climate change” , because of traitors like John Kerry!

And one wants to be a Catholic?

Bring a true Catholic doesn’t endorse what man does. He is NOT God and will also answer for it one day. There are many good values and anyone that looks to the Pope as if he were Jesus is breaking one of the commandments. Not everyone is a bad Catholic. No religion is perfect. Always look to Jesus Christ not a man.

So the Pope can be using his platform for the unborn but instead is buying into the climate BS. Exactly why we look to God and not man. Something about him just doesn’t sit right with me. I hope I’m wrong.

That is because the Pope is a Marxist communist himself. A socialist who as Lenin said is the road to communism

I didn’t know the Pope was gullible.

This particular “Pope” should be spending every minute enjoying the temperatures here on earth since in a VERY short time he WILL be someplace at least a few million degrees warmer.

What in the World is Lurch doing in Rome to combat “Climate change” The Stupidity of the Democrats never ceases to amaze! Is he trying to sell the Pope Heinz Tomato sauce