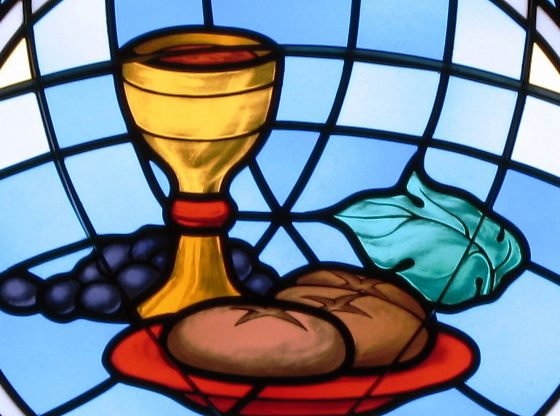 Ahead of the Solemnity of Corpus Christi, where Catholics, Anglicans, and Eastern Orthodox churches celebrate the Real Presence of the Body and Blood, Soul, and Divinity of Jesus Christ in the elements of the Eucharist, Father Roger Landry of Fall River, Massachusetts penned an op-ed in the National Catholic Register about the conditions of Holy Communion.

In a piece titled “Holy Communion, the Bread of Life, Is for Defenders of Life Who Live in God’s Grace,” Fr. Landry wrote the following:

“Both the good and the bad eat of this celestial Food, but with ends how opposite! With this most substantial Bread, unto life or death they’re fed, in a difference infinite!”

How can pastors, or faithful, or anyone who claims to love God and neighbor ignore this truth? It’s not surprising that those who would allow the image of God to be desecrated in the womb would not grasp the horror of a sacrilegious Communion, but how can those who profess to believe in the Real Presence of Jesus in the Eucharist, or in the eternal consequences of sinful choices, treat it as no big deal?

Lack of unity on each of these pastoral crises compounds the other. If the de facto message of the Church is that everyone receives Holy Communion no matter what, then it seems cruel, judgmental and sinful to suggest that those who support the savage destruction of our littlest brothers and sisters must be refused. Similarly, if prominent Catholics who infamously support abortion receive Holy Communion, how can anyone else not feel that he or she is similarly entitled, no matter what unabsolved sins they may have committed?

To move forward on the question of refusing Holy Communion for pro-abortion politicians without addressing effectively, at the level of parishes, schools and homes, the Catholic teaching about life and worthy reception of the Eucharist would run the serious risk of it being interpreted as the scapegoating of a few in a sacramental vendetta, something that could appear to many as reducing the Church’s teachings on life and Communion to political positions.

As important and urgent as it is to address the scandal of the sacrilegious Communion of unrepentant pro-abortion Catholic politicians, the bishops, priests and faithful in the U.S. need to remedy first the practical confusion about the Fifth Commandment and about basic sacramental theology.

The letter comes as many pro-life bishops, clergy, and laity have called out pro-abortion Catholics for their embrace of the killing of children in the womb. The U.S. Conference of Catholic Bishops is set to convene to discuss the dissemination of Holy Communion to those who have embraced the sin of abortion.

Biden and piglosi are hypocrites and shouldn’t receive communion. His administration is full of those so called catholics and they are disgusting.

May they sinfully accept sacrament and subsequently CHOKE TO DEATH. THOSE WHO KILL DEFENSELESS UNBORN BABIES ARE RIPE FOR DEATH ROW.

ALL WHO CONDONE BABY MURDER MUST BE EXCOMMUNICATED

God bless all the Priests who stand against abortion. I will pray for all of you who stand in the gap for God.

You cannot be Catholic, Presbyterian, Baptist etc. and be for the slaughter of the unborn. You can pretend to be…but it is a lie.