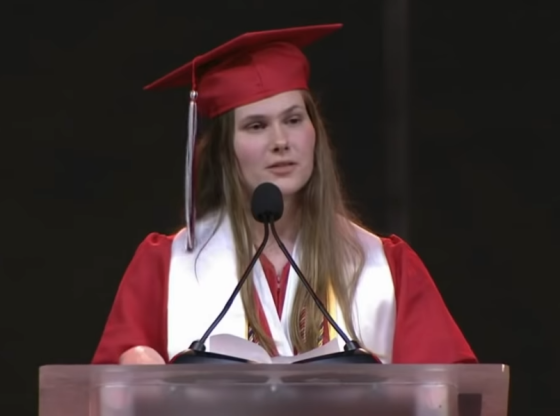 Failed presidential candidate and former Secretary of State Hillary Clinton heaped praise upon a teenager who used her commencement speech at her high school’s graduation to promote the killing of children in the womb through abortion.

The former First Lady tweeted her support for Lake Highlands High School valedictorian Paxton Smith, who pulled an unapproved valedictorian speech from her bra at the lectern on graduation day and delivered a speech about Texas’s Heartbeat Act.

“This took guts,” Clinton tweeted. “Thank you for not staying silent, Paxton.”

The new Texas law bans abortions after the unborn baby has a heartbeat. By the end of the fourth week of pregnancy, according to the Cleveland Clinic, the unborn baby’s tiny heart tube will beat about 65 times a minute, and a heartbeat can be detected by about six weeks.

“Most women don’t even realize they’re pregnant by six weeks,” Paxton Smith said. “And so, before they have a chance to decide if they are emotionally, physically, and financially stable enough to carry out a full-term pregnancy, before they have the chance to decide if they can take on the responsibility of bringing another human being into the world, that decision has been made for them by a stranger. A decision that will affect the rest of their lives.”

“I have dreams, hopes, and ambitions,” she continued. “Every girl graduating today does. We have spent our entire lives working towards our future, and without our input, and without our consent, our control over that future has been stripped away from us.”

“I am terrified that if my contraceptives fail, that if I’m raped, then my hopes and aspirations and efforts and dreams for my future will no longer matter,” she said. “I hope you can feel how gut-wrenching that is, I hope you can feel how dehumanizing it is to have the autonomy over your own body taken from you.”

She will look back on this diatribe and think what in the hell was I talking about. Shame on me.

If and when she does- it will be too late. She will be in hell where she belongs. Too bad she wasn’t aborted!!

I don’t buy it. Pregnancy tests can tell a woman she’s pregnant well before six weeks.

Paxton….are you grateful to a mother who chose to give birth to you?

If that’s her picture, then I don’t think she’s gotta worry about pregnancy, unwanted or otherwise.

She most likely likes girls so won;t have babys

Killing a baby is not dehumanizing? Clinton, Pelosi, Biden, Harris and now this child are all about NOT taking responsibility. Disgusting people that should have been aborted themselves and made this a better world without them!

Somehow I don’t think that innocent baby inside that womb gives a rats ass about if you are ready for it .Try keeping your legs crossed or use contraception before ingaging in unprotected sex . God bless the children and woe to the ones who harm them ! Try taking responsibility for your actions!!

There it is.. pulling the rape statistics when 99 out of 100 abortions are women that spread.. the lack of logic is stunning …a valedictorian? Gross

Any chance the problem could be pre-marital promiscuity?

Officials at John Glenn High School in Westland, Michigan demanded senior Savannah Lefler change her speech urging we live our lives devoted to Christ and Lake Highlands High School in Dallas allows their valedictorian to promote abortion. Admittedly I do not study the Bible but believe this is Bible prophecy; What is good becomes bad and what is bad becomes good. Ladies and gentlemen, we’re on a slippery slope here, get right with the Lord, His time is coming soon.

can’t wait!! It is getting really yucky down here!!

Pretty sure mother’s are succeeding the workplace…

To bad your mother didn’t abort you

And yet your mother chose to give you life, go figure

Someone needs to sit her down, pull out King James . Where Jesus says, bring all the little ones unto HIM.ABORTION IS MURDER!! No other way to look @ it. IF YOU DON’T WANT A BABY; DON’T HAVE SEX!!!PERIOD. Why would a school allow any student, Valedictorian or not, to speak on the issue?

That is the real question isn’t it. Why is horrible school allowing this most obnoxious students to speak/— it begs the ?—- if this weird student is their best who is there worst student

Then it would probably be a good idea to avoid getting pregnant. It’s not the baby’s fault that you screwed up.

Two points: 1) if you’re having sex, you are responsible for the outcomes. If not, maybe you shouldn’t be having sex. The consequences and rewards aren’t separable. 2) notice she admits being responsible enough for bringing a”human being” into this world. So I guess this young woman actually admits that abortion is irresponsible. God has determined the outcomes of sexual relations. Yes, they are there if you like them or not. If you are irresponsible with sex, abortion continues your irresponsibility. And your accountability for taking the life of another human being. Mrs. Clinton, you applaud an evil act, but it’s no surprise. Evil is what evil does.

ABSOLUTELY, Clinton is no role model by no means. I definitely wouldn’t want my daughter to listen to ANYTHING clinton had to say. You know she’s wrong if she believes like the clintons.

Female version of Shrek lectures us on why women should be allowed to fornicate without consequences.

Dems claiming to be christian and at the same time support genocide of 63 million unborn children and go after Israel, should not be calling themselves christian.

ABSOLUTELY TRUE, I’m not judging anyone BUT you are so very right it’s hard to believe they’re reading from the same BIBLE , I read .

They most ,ikely have never opened a Bible!!!

You can thank the person who wrote this Post fore promoting and giving more power too this girl’s speech and getting it out all over the World. In other words backing her up.

An inhuman attitude like that coming out of a brutal face like hers is somehow chillingly appropriate. Is she a robot or has the poor girl’s body been snatched, commandeered by an alien bean pod from a distant galaxy?

She decides the best way the graduates should go out and start their lives is by ending the lives of others? Doesn’t sound like valedictorian material to me. Doesn’t even comprehend simple biology. Those who praise her are even more ignorant or simply not human.

There will be a lot of smart people dumb enough to go to HeLL!!!!!👿🐍

“Most women don’t even realize they’re pregnant by six weeks,” Paxton Smith said. “And so, before they have a chance to decide if they are emotionally, physically, and financially stable enough to carry out a full-term pregnancy, before they have the chance to decide if they can take on the responsibility of bringing another human being into the world,…

Yes, they definitely need more time to decide whether or not to murder their unborn child. Abortion is barbaric in nature and a crime against humanity. It is the foundation of violence in our culture as identified by St. Teresa of Calcutta (Mother Teresa). “We must not be surprised when we hear of murders, of killings, of wars, of hatred. If a mother can kill her own child, what is left but for us to kill each other.”

Clinton, aren’t you tired of having people killed?

people arent u tired of clintons

Stupid child and stupid adults. You don’t make a decision about whether you’re “emotionally, physically, and financially stable enough to carry out a full-term pregnancy” AFTER you get pregnant. You make that decision before you decide to have sex.

So miss valedictorian Paxton Smith did you have a funeral for that child you aborted? Or did you just have them incinerate the baby? You weren’t brave you were a coward!