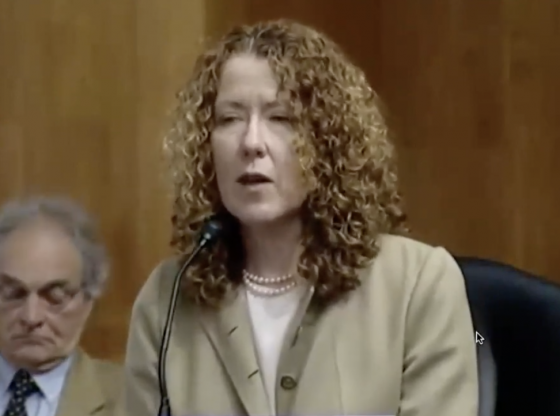 Joe Biden’s nominee for the U.S. Bureau of Land Management (BLM), Tracy Stone-Manning, has made shocking statements in support of population control about the humanity of babies in the womb, calling unborn babies an “environmental hazard.”

Manning, a radical environmentalist, has been a proponent of population control policies that mirror those of the Communist China’s one and two-child limits and advocated for them in a 1992 graduate thesis prepared while attending the University of Montana.

As first reported on by the Daily Caller, in Stone-Manning’s thesis, she crafted eight commercials to “tug at the root of many of our environmental horrors, overpopulation.”

One of the ads she proposed depicted an American baby as an “environmental hazard.”

“We breed more than any industrialized nation,” the ad stated. “…On average, each of us gobbles the same energy as 3 Japanese, 13 Chinese, and 499 Ethiopians…When we overpopulate, the earth notices it more. Stop at two. It could be the best thing you do for the planet.”

Despite declining birth rates in the country, Stone-Manning stands by her anti-life comments and writings.

We are not breeders. Your mother didn’t kill you in her womb. She must be appalled at your speech. You obviously have no belief in God. I feel sorry for you. I don’t think God will. Enjoy Hell.

LETS GET NEW LAW, YOU WANT TO KILL INNOCENT, UNBORN BABIES, WE KILL YOU INSTEAD. SAVE THE BABIES KILL BABY MURDERERS.

Why are all Biden nominees hateful anti American lowlife evil scum morons? Only the most vile subhuman selfish demented putrid bucket of puke could even conceive of such evil. Earth has no use for wastes of life such as this thing.

Well aren’t you just a special kind of stupid!!!! You’re as evil as the rest of the democrats you suck up to. Do you have children? If so I truly feel sorry for them.

This woman is a prime example of a psychopathic personality. Her past history of disregard for human life endangered by her actions proves it. She is only concerned with her own life and no others.

Oh, I see. So babies are a hazard to the environment because the earth is good and pure and Man is evil? Well, God does not agree with you. There are hurricanes, alligators, rattlesnakes and alligators and deadly diseases; no, nature is not all sweetness and light. Man is here to harness the earth. If he refuses, it will control him. If he worships the earth, nature will eat him alive.

She could help the situation by committing suicide then her foul breath would help stop the “climate change”.

So, another appointment by Biden that is an ‘in your face’ to the Catholic Church, a faith that he professes. Yet people criticize Bishops for suggesting that he be denied access to the holiest of holies in the Catholic Church, the body and blood of Christ in the Eucharist.

No baby should be denied the right to live whether he/she has a disability. As it stands the biden administration seems to think that babies are unimportant. That the aborting of a a baby ( murdering) of a baby is fine. What happened to the babies’ right to life? As a CHRISTIAN, life begins @ Conception.. GOD sees the killing a person is a Sin. So, aborting a baby is murder. Just because it’s a baby doesn’t mean it doesn’t have rights. If one becomes pregnant, doesn’t mean abortion is the ONLY way to handle the situation. There are plenty of women who can’t have a baby who would love to adopt & raise it as their own.