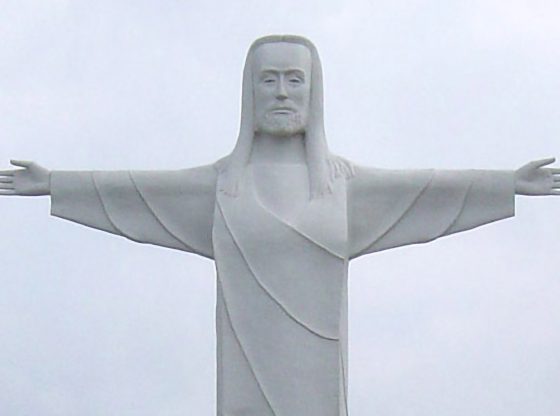 On Friday morning, radical pro-abortion activists desecrated the “Christ of the Ozarks” statue in Eureka Springs, Arkansas, putting a banner on it reading “God Bless Abortions.” The group “Indecline” reportedly took credit for the depraved act.

Disguised as construction workers, the abortion activists said they scaled the statue early Friday morning to hang the banner. They said they want to make a statement about “the dramatic attempts being made in Arkansas and throughout the South to ban abortion services to women in need.”

The abortion activists appear to be part of an antifa, or anti-fascist, group that works anonymously to vandalize property and create shock art to make political statements about abortion and other issues. The group describes itself as an activist art collective.

On its website, it sells a T-shirt for babies that reads, “God bless abortions.” Another T-shirt reads “Shoot cops” next to the image of a camera.

In March, the group also took credit for vandalizing a Byhalia, Mississippi billboard purchased by Christian Aid Ministries. The message read, “Worried? Jesus offers security,” along with a phone number for the ministry. The pro-abortion group spray-painted over the billboard, changing the message to say, “Worried? Planned Parenthood offers abortions.”

The activist group who hung the banner say they are not “pro-choice or anti-life,” but sent the message as a way of saying “abortion is a… miracle worth saving.” https://t.co/rTGnvaj6aU

Here a question to you pro- murders since them1970’s since Roe-Wade their has been 62 millions babies killed how many got a funeral? When you have a family member die you cry and carry on about that but there is No funeral for that child WHY???

God will not forget this America, you have lot your way!

AmeriKa is to be invaded & destroyed…

Beware, radicals! God is not mocked.

I feel that there is a special punishment for this crew. This indeed is mocking God, and I think they will see very little mercy.

I believe in late term abortion in two cases…the life of the mother is in danger of dying…and these activist need to be aborted at an very late term for their activities!
Someday they will pay the ultimate price!
I would suggest a law be passed that all abortionist should have their children aborted and they have to observe as their babies are murdered and bury the fetus!