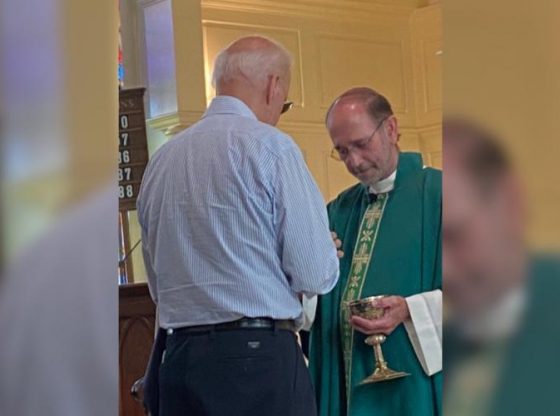 Despite the U.S. Conference of Catholic Bishops passing a resolution to deepen the awareness of the Eucharist, pro-abortion politician Joe Biden’s priest in Wilmington, Delaware was caught giving Holy Communion to the anti-life former vice president.

According to a report published at California Catholic Daily, Biden received Communion again on July 24 at St. Joseph on the Brandywine Catholic Church in Wilmington, Delaware, his home parish.

The president professes to be a devout Catholic, but his administration has adopted the most radical pro-abortion policies in U.S. history. Not only did Biden recently allow abortion drugs to be sold through the mail without a doctor’s visit, he also is trying to force taxpayers to pay for elective abortions in Medicaid and in other countries.

These and other actions that Biden has taken in direct violation of Christianity have caused massive controversy among Catholics, with many saying he should be denied Communion unless he repents.

Some priests and bishops, however, have said they will not refuse Communion to Biden or any other pro-abortion politician, including Cardinal Wilton Gregory, the archbishop of Washington, D.C., and the priests at Holy Trinity Catholic Church in Georgetown, which Biden attends while in Washington, D.C.

BREAKING: A Catholic priest in Washington D.C. has been caught giving Joe Biden communion, even though he is not a "faithful Catholic" because he's radically pro-abortion.https://t.co/m4sQAwvt6h pic.twitter.com/tXKL22DMPs

A fake President getting communion from a Fake Priest

This priest appears to put Biden above his duty to his flock.

Makes me sorry to be a real catholic. We have a socialist pope and many anti life priests.

Only God can forgive them. I’d say it’s not looking good for either of them 😜

In that fine film Indiana Jones and the Last Crusade a Brother of the Cruciform Sword, sworn protector of the Holy Grail, is shot down by the Nazis, who seek the Holy Grail. Before he dies, he warns: ‘For the unrighteous the Cup of Christ holds everlasting damnation.’  Is this a pearl of wisdom to consider and apply when receiving all Holy things in the wrong spirit?

It’s not Holy Communion when it is given by a demon to a demon, it’s satanic communion!

B Kirsch
Reply to  Jojodmonkey

Judgment day is coming for all of us and hypocrites be on notice that you will have no excuses or alibis. You will suffer the consequences of mocking the Lord.

This is not Holy communion- nothing HOLY about it😥🇧🇴

When something is wrong it is wrong giving Holy Communion to Biden or any of those dirt ball democratics is a disgrace
.what is wrong with those priests and bishops they’re suppose to represent God on earth its a joke.

I would not want to be Biden when he stands before the Lord in judgement!