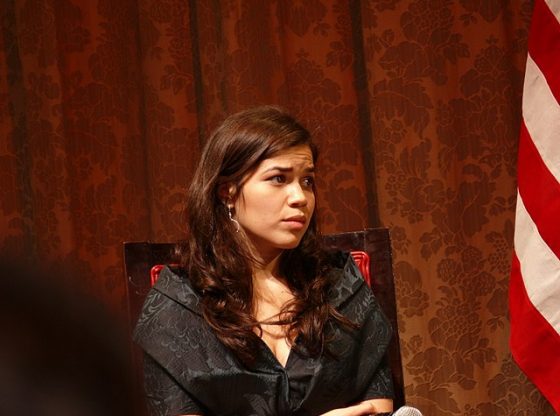 On Friday, during the left-wing talk show The View on ABC, actress America Ferrera bashed Texas’ pro-life law saving babies from abortions, arguing it was racist to restrict abortions because it would “oppress” black and brown women.

Guest host Star Parker asked Ferrera, “Speaking of children, America, ​​I want to ask you about what’s happening in Texas which now has a near-total abortion ban and restrictive new voting legislation that is in place…How concerned are you about the plight of women in Texas, and what we all know is going to follow in a significant number of our states?”

Ferrera replied, “[L]et’s just call it what it is. Access to abortion is about race and poverty.- if you are rich and white, chances are, you will find access to the health care that you need. When we restrict women’s rights and access to make choices about their reproductive health, what we are doing is restricting black and brown women and poor women.”

Yes, you read that right. According to the left, it’s now racist to want more black babies to live, and not kill them. No one at the table disagreed. The ladies on The View rely on their audience’s ignorance to let lies like this stand. Planned Parenthood, the largest abortion organization in the country and championed by Democrats, was funded by a white, racist eugenecist named Margaret Sanger.

Earlier in the show, the hosts were already skewing the facts to trash Republicans on vaccines. While hailing President Biden’s demeaning address to the nation yesterday where he scolded the unvaccinated, co-host Sunny Hostin suggested vaccine hesitancy wasn’t a problem with black Americans.

In the words of the GREAT RONALD REGAN:
“Funny how all those who are pro abortion are already born!” Not haha funny.

I have a question for all these people who love abortion? Just when are you going to have someone kill you? You all have such ignorant ideas, that you think make you a smart person. If you believe your statements commit suicide it should be just as good as being aborted! Before telling others what we need study the Bible to learn how life is to be lived!

America is another not real important actress. There sure are alot of those not intellectual kind in californica.

I really hope and pray this woman finds Jesus Christ and begs for his saving grace!
It’s the time of the reckoning God will shake these evil and wicked demons to their core, it’s not going to be a pretty sight!

She speaks words written by others for a living. That does not make her knowledgeable. Abortion kills black and brown people in greater numbers than any other group.

Abortion is racist. Most of aborted babies are from black or brown mothers.
That way minorities stay minorities! C’mon man!

No one can accuse her of being smart!

The majority of the aborted babies are from minority women; so obviously saving these children would be an act of racism. I wonder if this same logic would be applied by the left for the minority victims of the KKK??? The KKK was made up of Democrats too. Just saying!!!

It is obvious that this gal`s elevator does not go all the way to the top floor.

It’s stuck in the basement

So she doesn’t know M. Sanger pushed abortion to use as population control of black Americans? Statistics show that more minority babys are aborted than white babys. Now how racist is she?

how could that be racist, every one should be tired of that statement

Margret Sanger was a racist and promoted abortion as a way to control the black population and eventually wipe them out. Think on that liberal zombies. Our government promoted removing father’s from the family unit through welfare heavily weighted on the side of single mothers. Welfare workers of the time told families to divorce father’s or they got no money or food allotment. Welcome to the toltarian government of today.

It amazes me to hear the same old mantra used by the pro-abortion crowd, “My Body My Choice”. But these same people will want to put you in jail if you “Choose” not to put a vaccine into your body. Such hypocrites !!!!!

Do we really have to wonder why our Almighty Father in heaven is withdrawing His Holy Spirit from our once great country? Abortions, Fires, earthquakes, floods, tornados, unrest in the cities, a government that doesn’t know their ass from a hole-in the-ground, and the list goes on. God have mercy on us for we know not what we do.

My phone won’t let me give you a thumbs up for your comments, so maybe you’ll get this reply,👍👍👍👍👍

America Ferreira, nothing more than a racist and is claiming women of “color” are too stupid to get free birth control. What a fool she is. Oh, and I’m sure she is against voter ID because people of color are too stupid to show an ID. Last time I looked in the Bible it is God Almighty who created DNA which by the way includes our color. And so far in my studies of Gods Word I never have seen the term “race” or “races” to describe humans….

Another race bater get real shes another pos

Is this actress saying that women of color are too stupid or too irresponsible to use contraception?

This screwball has been drinking from the Dumocrat-Marxist well and does not realize that the water therein is not fit to drink. Her source of education must be from the fifth column what passes for media nowdays.

Saving her from execution is criminal. ALLOWING HER TO BREATH IS DANGEROUS. ABORT AND DISMEMBER HER. SEND PIECES TO WASTE OF LIFE BRAINLESS PARENTS.

Left uses race to get their way. If you don’t agree with their wrong opinion, you are racist.

Those leftist only know one word. Racist. The Hollywood it’s can’t carry a conversation without a written script, just like chinajoe.

So, does this mean that America Ferrera is in support of genocide against babies of color and not white babies? It sounds like she wants to have population control of people of color to avoid their numbers growing in this country. Isn’t that RACIST?