Feminist Claims Killing Babies in the Womb is a ‘Sacred Ritual’

Home /National, Opinion/Feminist Claims Killing Babies in the Womb is a ‘Sacred Ritual’

Feminist Claims Killing Babies in the Womb is a ‘Sacred Ritual’

Salon’s Amanda Marcotte freaked out over Texas protecting the lives of babies in the womb. She’s even gone so far as to embrace Luciferians.

She asserts the Satanic Temple “does not literally worship Satan,” but they do sue states to force them to display Satanic imagery along with Christian ones and claim “abortion is one of their sacred rituals, making the ban a major imposition on their free expression of religion.” It’s hard to get more devil-worshiping than child sacrifice. They’re actually saying the quiet part out loud.

The reason Marcotte loves the Satanic Temple so much, besides their mutual interest in shedding the blood of the innocents, is because she thinks their trolling legal maneuvers highlight her crazy conspiracy theory that “The anti-choice movement is just one part of a larger effort by Christian fundamentalists to covertly turn the U.S. into a more theocratic state.”

Yes, she seriously thinks this: “Conservatives go to great lengths to hide how much being anti-abortion is about forcing all Americans to live by the religious tenets of the white evangelical minority.”

Here’s an excerpt from her piece about the fetal heartbeat:

Indeed, the pretense for banning abortions so early — the “fetal heartbeat” — is also a lie. As actual medical scientists and doctors told NPR, there is neither a fetus nor a heart that early in pregnancy, but more “a grouping of cells that are initiating some electrical activity” that GOP legislators misleading call a “heartbeat.”

The anti-abortion movement cannot be meaningfully separated from this theocratic movement of white evangelicals, or, for that matter, from white supremacy. It’s all one big bundle of intertwined ideas, and all the same people pushing it. These are folks resolutely opposed to a multiracial democracy, and instead have a vision of the U.S. as a white supremacist state where their far-right religious views shape the laws that everyone has to live by.  And despite the fact that Ten Commandments explicitly forbid bearing false witness, these theocrats lie and lie and lie — about science, about the law, about their intentions — because they know full well that their mission is anti-democratic and violates the constitutional precepts about freedom of religion.

What do you think of this so-called “feminist’s” beliefs? 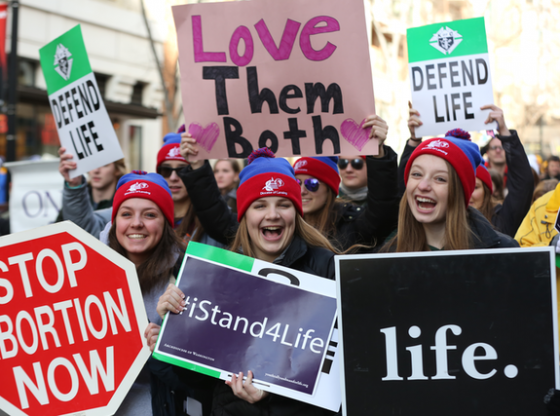 So the evil abortionists finally come out and admit that killing babies is a satanic ritual. Democommies + Abotionists = Satanism

This is one nation under God…. not satan. Sick wackos need to leave the USA if they don’t like it. Open your satanic center in the south and see what happens.

Maybe for a Satanic ritual!

It is a scared ritual for satanic Luciferian’s, but this is God’s earth, God’s cosmos and God’s babies and, he is sick amd tired of you demons murdering them!

The Democrats, and the Pro Abortion groups Always claim that this is about a woman’s right to choose, and a health issue…….and that allows them to deny any responsibility for killing an unborn baby right up until birth…..Mental Health and depression is also a problem for women after giving birth as post partum depression is not at all unusual, with significant hormonal changes, as well as the increased responsibilty of caring for a newborn….given that……why allow abortion right up until birth, but then deny a mothers right to choose right AFTER birth…..say, Oh I don’t know what the right time frame is..maybe a week , ten days….a month?…….so that even after the child is born the Woman STILL HAS THE RIGHT to determine if it lives, because it may very well jeopardize her MENTAL WELL BEING….maybe the Democrats can pass a law, that maybe if the baby makes it to a 30 days, then it cannot be terminated……..that should be fine with the Woman’s Right to choose crowd RIGHT?…other wise, isn’t that denying a woman’s right to choose?

I would say that a baby being allowed to fully develop and to be born would not be a cause jeopardizing the mother’s mental well-being. NO; instead, the mother’s decision to kill her otherwise healthy baby’s opportunity for life is proof that the mother’s mental well-being was already compromised – at whatever point of development the zygote/fetus/baby may have yet reached. Her “right to choose” SHOULD have been applied about having sexual intercourse – the natural way The Creator designed the function of beginning a pregnancy by all mammals. If she was impregnated through IVF, (In-Vitro Fertilization,) the same responsibility to protect life remained.

I’m sure glad that on the day of judgment, I don’t have to be in the shoes of those clowns!
God hates the murder of innocent children and will most assuredly send the satanist where they belong!
Without Jesus Christ, these folks will surely burn for eternity, not a threat, a fact.