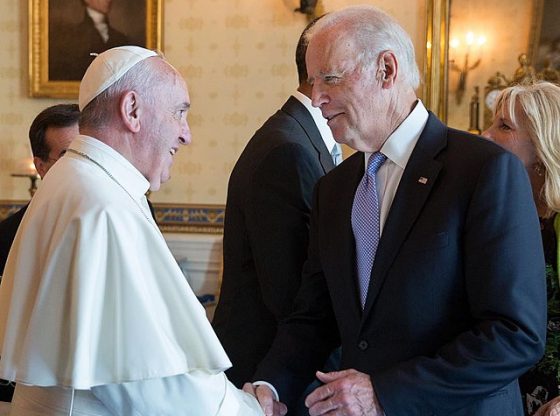 Pope Francis is challenging us. He has raised some of the most difficult issues facing the world today—income inequality, poverty, mass migration, immigration, human trafficking, climate change. These are issues we can, and must, address. We will ultimately be measured by what we do, not just what we say. Via Wikimedia Commons.
| Prolife Update Staff | National | 15

Breitbart reports Biden recently nominated former U.S. Sen. Joseph Donnelly to the role. Donnelly, who is Catholic, represented Indiana in the U.S. Senate from 2013 to 2019 and the U.S. House from 2007 to 2013.

Donnelly’s nomination likely will be confirmed in the U.S. Senate in the coming weeks without controversy. Previously, Callista Gingrich, a pro-life Catholic appointed by President Donald Trump, served in the role.

Though Donnelly says he is pro-life, he repeatedly voted to fund the billion-dollar abortion chain Planned Parenthood with hundreds of millions of U.S. tax dollars.

Donnelly lost his seat to pro-life Sen. Mike Braun in the 2018 midterm elections.

Take that animal and Satan worshiping baby killer, pope? Francis, and crucify both.

And God will say, when these two EVIL pile of crap (one in a suit, one in a robe)will say…… ‘ DEPART FROM ME, FOR I DO NOT KNOW YOU’! Have a nice trip, schmucks!

And why wouldnt he. Next up is nominating an anti-semite to be the ambassador to Israel. What a pip this guy is.

Not sure “pip” is the correct word to describe this guy. Quite a few other words pop (not a misspelling of pip) come to mind.

Talk about a SLAP in the FACE to the Vatican….. and this coming from a so-called Catholic

Just another pretend catholic who promotes baby killing. Do we really care who an ambassador is, they are just political pawns.

I’m surprised it wasn’t one of the Taliban!

We have a pope with no backbone to do the right thing !!!!!

NASTY! Joe can spit in the Face of God just so often before he incurs the full wrath of God. What a disgrace to humanity. Catholic Joe and all his henchmen are now laughing at the Catholic Church. Won’t be long before we are all laughing at them as it has already begun.

I hate the picture shown here of the Pope and Biden shaking hands. Look at their eye contact. You can practically hear them thinking, “We know we both have an evil agenda, and we both have the power to get it done. Heh heh heh.”

The U.S. contributes hundreds of billions to support those unable or unwilling to support themselves. I’d challenge the Vatican to do the same.