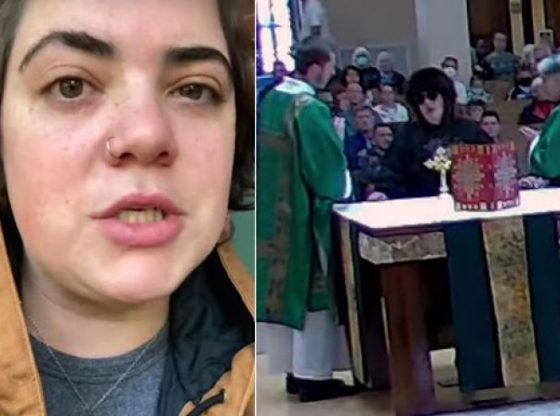 Colorado police are looking for a pro-abortion activist who they believe vandalized the Cathedral Basilica of the Immaculate Conception in Denver in October.

In an Oct. 2 video on YouTube, Cramer said she was raised Catholic and baptized at Saint Frances Cabrini Church in Littleton, Colorado. She criticized her former parish for “actively supporting anti-abortion throughout the country.”

Cramer charged that the [Catholic] Church “hate(s) women, you want to control women, you want to silence women.” She closed the video saying: “So stop just be honest you’re not filled with love for God, for the baby, for the woman. You’re filled with hate and you know it and we know it.” Deacon Chet Ubowski at St. Frances Cabrini in Littleton confirmed to CNA that Cramer is the woman who approached the altar during Mass at the church Oct. 10, just hours after she [allegedly] vandalized the cathedral. During her interaction with the celebrant, she claimed to be a satanist.

Find the murdering whore. MAKE HER PAY FOR DAMAGED. THEN CRUCIFY HER. SHOW ABORTIONISTS THEIR FUTURE.

God is the judge, I wouldn’t want to be her as God doesn’t suffer fools and evil gladly.

People ? who do this rank with the lowest of the low.

Anyone that is pro-abortion belongs to Satan. After all, they are doing his bidding.

HE said “Whatever you do to the least of my brethren , you do to me”. There was also something about a millstone , God will deal with those who harm the innocents.

So not wanting female babies to be slaughtered is hating women? The illogical thinking of the radical leftists is alarming.

That is the “poster” child for criminally insane. The lights on on, but nobody is home.

Or as my mom would have said: “Her cornbread ain’t cooked in the middle…”

When you let enough anger build inside of you, Satan has an easy time controlling you.This young woman has major problems.She no longer holds the reins on her actions–she’s given them away to an entity that desires evil. You see the result.

The Lord will have a very gentle yet pointed conversation with her. When He is finished with her, she will melt down in agony and shame and condemn herself to outer darkness.

Find the pig. CRUCIFY IT.