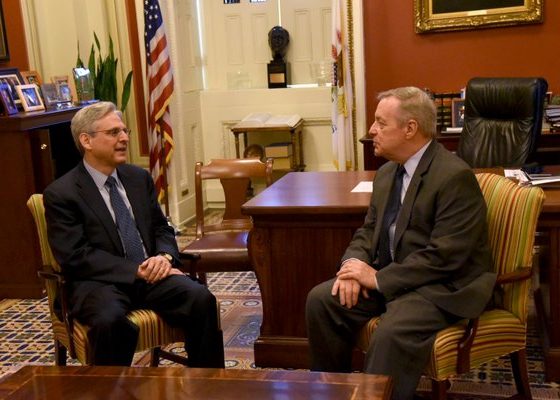 Sen. Dick Durbin (D-IL), a supporter of abortion up to birth, complained that his Catholic diocese is being “fundamentally unfair” by denying him Communion.

Townhall reports the Illinois politician said his home diocese, the Diocese of Springfield, has refused to allow him to participate in the sacrament since 2004 because of his pro-abortion stance.

“It’s not a happy experience,” he told America Magazine. “I found another Catholic venue, the Archdiocese of Chicago, and a church where they were willing to let me in and allowed my wife to join me. So it’s become my new faith home.”

Durbin, who has served in the U.S. Senate since 1997, has a 100-percent pro-abortion voting record, according to National Right to Life. He recently even opposed a bill to protect newborns who survive abortions from infanticide.

“If we’re going to start down this road of denying Communion, where do we stop?” Durbin asked.

He added, “[M]y views on abortion are publicized regularly with my voting record. Other Catholics may share my point of view — statistics suggest they probably do — but they show up to Communion every week without any questions asked. In the end it is a personal decision to stand at that rail, and I think with very few exceptions, Communion is offered to anybody if the person believes that they are worthy of it.”

Senator Durbin, Catholic sacrement of Communion is for Catholic faith followers and believers, it is not relevant for everyone. If you have decided not to follow the Catholic faith, then you are certainly free to leave!

Did you ever think that you are being unfair by supporting the killing of innocents. Know your faith you supposed catholic. It s not about woke crap fairness its about the teachings of your faith
Thankfully someone in the church has the guts tondonthis.

“your faith”? Cannot be – his church is the church of satan!

There are no real Democrats anymore~ only Satan’s agents. 😢

That’s the point. If you support and promote abortion, and you do it publicly and politically, then you are not worthy to receive Holy Communion. Reread your catechism, dimwit. It’s in black and white. A mortal sin is a mortal sin and you are in a constant state of mortal sin. No Communion until confession with a promise to go and sin no more.

He and others like the speaker and even joe cannot do enough penance The would need to build an entire stadium for the politicians who profess to be Catholics but practice something else. And no kneelers one the stadiums let that pain be offered up as well

Maybe they will stop when you stop killing babies you ass.

Poor thing; he’s a “victim” now…
I don’t understand why he, and people like him are not just excommunicated, and end of story. It should only take a Bishop (and a Pope) with the (say) ‘guts’ in the right place. I say: better alone than in lousy company!

Why does Sen. Durbin claim to be a Catholic when he doesn’t support the most fundamental of Catholic teachings? He is an embarrassment to Catholics.

I told my Democratic sisters that you can’t be a Catholic and a democrat. It finally sunk in. They are now all conservative Catholic Republicans

What does that murderer mean by “‘ I think with very few exceptions, Communion is offered to anybody if the person believes that they are worthy of it.’”?

What do we say just before Communion? “Lord, I am NOT WORTHY to receive You. But only say the Word and my soul shall be healed”.

What an evil leech.

VOTE THEM OUT
Biden created gas and gasoline increases have fueled inflation, and now created a recession. Self created shortages, caused by piss poor bureaucratic decisions, have cost jobs, caused unnecessary energy shortages, added pressure to the American economy with continual higher price increases across the board. Shutting down the pipelines has caused many National emergencies. Biden likes to blame the virus, but it’s stupid un- American decisions that caused these self inflected wounds. Time for the bidens to be investigated, Attorney General Merrick Garland, another biden appointee,who is just a figure head, who knows nothing about nothing, Can’t investigate Hunter bidens gun applications,or his conflict with art sales,or any thing else concerning Hunter or the biden crime family. Are you in charge of the Department of Justice?, yes i am, Well how illegal’s aliens have you prosecuted or charged for violation of federal immigration laws? none ,Why is the crime rate and murder rate so high with the democrat controlled cities? don’t know, why are drugs being smuggled into our Country at a all time high? don’t know .Why did the Attorney Generals office fire all Trump hires? don’t know. Why did they even bring this guy in before Congress?? Oh yea, moms and dads, because they don’t like the way your son and daughter in law have a conflict of interest with your position? don’t know. How about because the school boards heads and the teacher s unions complained to the White House they did no like to answer any questions at the Schools with parents meetings? about what ii being taught to their children,? don’t know. Do you think the teachers union should be exempt from receiving the virus shots? don’t know. Are you going to call in the FBI on every issue that comes up and you don’t want to stick your neck out? don’t know. Who is paying the biden’s to kill America? The big red wave is coming, hold the democrats accountable, tax and spend socialism is not the American way, flatulent putz biden, has our Country in recession, where is the report he is mentally fit to serve? The dalt does not produce enough personal gas to run our Country without inflation, shortages, although those standing down win of this public farter would argue that point. America is in serious in debt and it’s now getting worse, No border security, children in schools threaten with communism teachings, gasoline increases to $5.00 a gallon plus. Biden not only needs mental diaper changes, but physical diaper changes.Who is directly these mindless policies? Who is in charge of trying to run our Country into bankruptcy? Can’t wait till 2022 is here and investigations of abuse of power begin and these appointed non experienced heads are held responsible where they thing attacking Americans with self imposed mandates superceded established law to the point of being them being held treasonous. Remember how your household was affected, food shortages, transportation increases,don’t forget America look who is holding public office in your area, if they are democrats who voted for our Countries current problems,vote them out, let this be the new battle cry for voters, “not defund the police” but “VOTE THEM OUT” look at each biden department heads radicals, no experience in their field of appointment, now that the problems are here they lack the ability to solve them, Biden must be investigated for his disregard of our laws. It’s not too late America, vote them out in 2022 take back the House, take back the Senate,get our Afghanistan stranded people back.

Too bad Illinois voters don’t also have the courage to deny this Dick.

Heard of fixed elections? They took lessons from Illinois – the state where every 4 years the dead rise from the grave to vote. Last election was called for Biden and the Democrats while people were still in line to vote. And that was in the suburbs. Hoping and praying to rid Illinois of Duckworth in 2022

You should have put a little more in the collection plate, Dick. Works for Dementia Joe and Nanzi !

Well dick, how about stopping at the church door, And giving some thought to the murdering of an unborn infant?
Did you miss the part about “thou shout not kill”? Man, are you ever lucky that your mom didn’t think like you! Yay!

In the case of many “progressive” leftist elites, I’m all for retroactive abortion.

What a sick determination. “If the person feels worthy of it.” Ask a murderer if he should be set free because he feels like murder is acceptable.

Durban should be excommunicated not receiving communion. The Catholic Church has no balls.

This whole issue shows weakness in the Catholic Church. They should have a leader who has studied the tenets of the religion and follows God’s will without cowering because of outside influences. That leader should send his strong statement down the line so that all congregations are in concordance. The fact that this politician can simply move to another congregation to get what he wants is proof positive there are problems within the establishment.

I thought God determines who He accepts. Does this person follow God’s laws or his own?