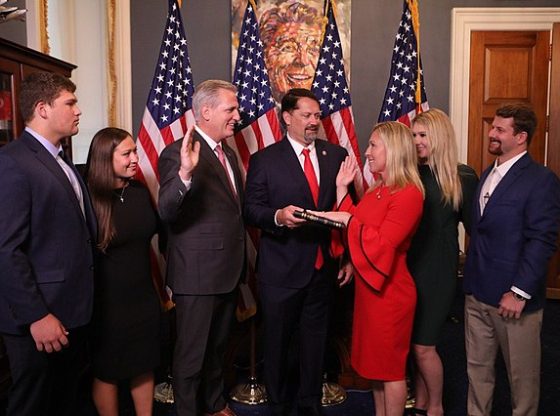 It was an honor to be sworn into the 117th Congress yesterday. I’m ready to FIGHT for the people of Northwest Georgia! Via Wikimedia Commons.
| Prolife Update Staff | National | 4

Rep. Marjorie Taylor Greene (R-GA) said January 6 prisoners are being “treated like second class citizens” by not being allowed to receive Holy Communion or practice their religion if they are “unvaccinated.”

Greene joined Fox News host Tucker Carlson on November 8 to discuss the treatment of the prisoners of the January 6 protest at the Capitol.

Asking the prisoners if they were allowed to have “religious services,” Greene was told emphatically “no…we do our own.”

“I submitted for Communion last week and they said the only way to get Communion is to get vaccinated, which is against our First Amendment Rights. So they’re prohibiting us from practicing our religion,” said one.

“Just so we could get the vaccine,” added another inmate.

“What I saw Thursday night when I went to the D.C. jail, after months of persistence trying to get in, just to see what was happening in there because of the terrible rumors that were coming out of that jail, everything that I’ve heard – I found was true,” Greene said.

The treatment of the J6 defendants at the DC Jail is appalling.

I joined @TuckerCarlson tonight with details from my visit and to tell their story. pic.twitter.com/HnEFqrq5qq

In my church the vaccinated are allowed to go without masks. Although I have received my booster I personally wear one for most of the service as I am compromised and don’t trust the possibility of a variant strike as this disease can father mutate. Others who are concerned and stir clear of gatherings can deal with their spiritual needs remotely and/or on TV/radio .
I had two friends who passed from the Wuhan coronavirus (covid-19) and it was an unpleasant experience conversing with one. I still recall speaking to him on the phone as he was hardly able to breathe. I insisted he call 911. He didn’t and passed 2 days later. He wasn’t vaccinated.
A third friend caught this Chinese-engineered-and-leaked virus from someone at work. He said it was horrible but, fortunately was treated with antibodies which he claimed was a lifesaver for him.
Thanks to Pres. Trump’s operation ‘warp speed’ dealing with this disease Because of trump’s aggressive agenda and overcoming bureaucratic barriers we have viable vaccines to utilize in the prevention battle. We also have newer medications and improved treatment plans available for those infected.

Please don’t worry you persecuted children of God! Keep your faith strong, praise the Lord our Holy Father and thank him daily for your Grace and gifts to come, your evil and wicked corrupt satanic Nazi democrat captors will be destroyed by the hand of God very soon.
I am truly sorry you have to suffer at the hand of these demons!

Is a law suite foth-coming.

Clearly a violation of constitutional rights and this is discrimination. The biden administration is out of control We are living in nazi germany right now and far too many are still asleep or just stupid. This raises even more questions about the vaccine being the mark of the beast or something close to it.