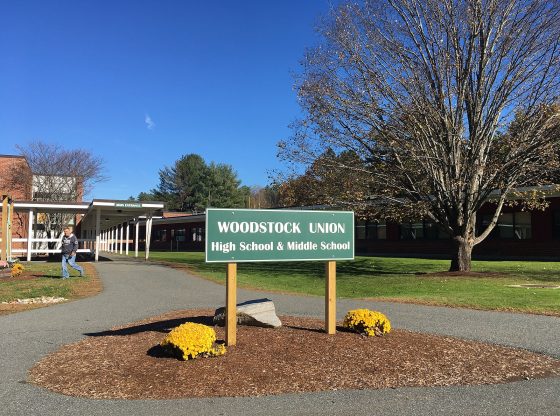 The main entrance to the school, located in Woodstock, Vermont, as seen on October 26, 2018. Via Wikimedia Commons.
| Prolife Update Staff | National | 7

According to a new report, Vermont has become the first state to require that all public middle and high schools have free condoms available for students in the school nurse’s office.

While the initiative was passed by Governor Phil Scott last year, its rollout has just recently been fully implemented. According to Today Health, Planned Parenthood of Northern New England is responsible for providing the contraception. Planned Parenthood has, in the past, been rated poorly on the effectiveness of its condoms.

The state’s statute reads, “In order to prevent or reduce unintended pregnancies and sexually transmitted diseases, each school district shall make condoms available to all students in its secondary schools, free of charge. School district administrative teams, in consultation with school district nursing staff, shall determine the best manner in which to make condoms available to students. At a minimum, condoms shall be placed in locations that are safe and readily accessible to students, including the school nurse’s office.”

Schools are also required to give students information about how to use condoms properly. And, according to Fox News, all this can be done without a parent’s knowledge. Guidance from the Vermont Agency of Education states, “Minors in Vermont have a legal right to access a full range of reproductive and sexual health services without parent permission. Minors are provided access to condoms in a variety of settings and may purchase them without parental consent.” The minimum age of sexual consent in Vermont is set at 16. While there are some “close in age” exceptions, students in middle school are well below this age — approximately 13 and younger, unable to legally consent to sexual activity — yet they will be entitled to receive condoms at school.

Better idea STERILIZE VT GOVERNMENT. REMOVE THEIR ABILITY TO REPRODUCE. THE LAST THING UNIVERSE DOES NOT NEED IS MORE OF THEM.

No surprise. A state that elects a Godless Communist senator (Bernie) is without conviction of the sanctity of life and more importantly our creator, Almighty God. Parents should demand this cease right now.

I marvel at how perverse government has become. It’s almost like these leftist notions are designed to enrage parents, even those whose children survived government schools. It’ll be interesting to see the level of rage by Vermont parents evoked by issuing condoms to their children. Perhaps a carbon copy of Loudon County, Virginia schools.

Just because all of the adults in this state are SINNERS, do not make the children follow in your footsteps to Hell. How horrible you people are!

Taxpayers paying for this! If your child wants to be sexually active, then they also need to bear the expense of those consequences! Taxpayers should not be on the hook for their sinful behavior.
Where are the parents in all of this? Oh yeah, the schools long removed parental involvement in their children’s lives because government now owns them.

Blame goes on the people for voting these liberal commies brainless people. Same lie they spew about not getting VD so this is the bottom line why are young teen getting pageant because they get so hot they will not take time to stop and say wait a minute. PPH is in the murdering business young teens do not did this extra burden on them. Sex is meant for adults to have children in marriage. Stop the horse manure liberal mine less sea dung.

Vermont, let’s just sexualize all middle-schoolers? This is mindless and unprincipled and will lead to further debauchery. Make the Vermont Government drink Socrates’ hemlock for corrupting the youth.