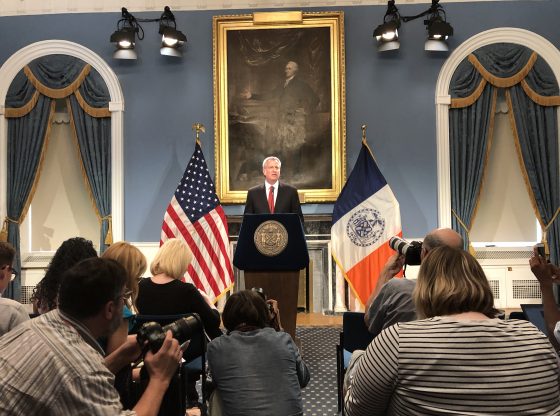 “We in New York City have decided to use a preemptive strike, to really do something bold to stop the further growth of COVID and the dangers it’s causing to all of us,” de Blasio said in an interview with MSNBC. “So as of today, we’re going to announce a first-in-the-nation measure. Our health commissioner will announce a vaccine mandate for private sector employers across the board.”

The mandate will not only target adult employees of private businesses but, starting on December 14th, also children between the ages of 5 and 11 years of age seeking to enter restaurants and theatres:

BREAKING: NYC is strengthening vax screening at indoor public establishments like restaurants & theaters.
* Will include 5-11 yr olds (as of 12/14)
* Will require a 2nd shot, not just single shot (as of 12/27)

These are much needed measures in the face of our delta/omicron wave.

Evil dems do EVERYTHING TO CONTINUE THE virus. WHY is it that the CONTROLLED dem areas are where the MOST covid is??? THE COVID SHOT DOES NOT WORK, it is only meant to CONTROL YOU & KEEP YOU FEARFUL. God tells us not to fear. Put your TRUST IN GOD, NOT government.

Educate yourselves, take the correct vitamins, exercise, eat good, get real sleep, MOVE OUT OF DEM CONTROLLED AREAS. USE THE COMMONSENSE GOD GAVE YOU.

Democrats will do as they are told. On your knees progressives.