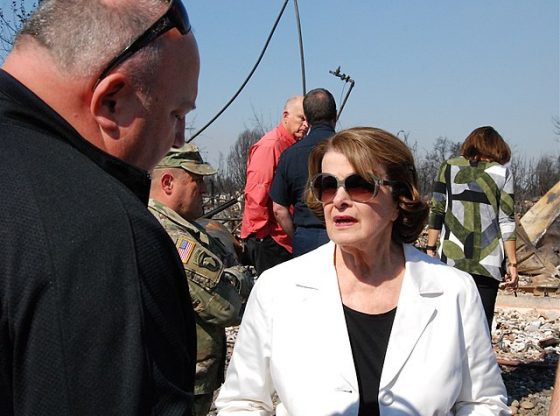 At 15 weeks of pregnancy, babies in the womb “suck their thumbs and yawn. Their hearts pump about 26 quarts of blood every day. They even show a preference for their right or left hand.” according to a Life News report.

When asked if a “fetus at 15 weeks is a human being,” [Sen. Diane Feinstein (D-CA)] responded in a convoluted way.

“Of course a human being is life, and you do not have life,” she said. “And so, I think it’s up to others other than me, but I basically believe that women should have the right within certain legal restraints to prevent those situations, which can be prevented – which can be very difficult.”

Feinstein also said she has been a steadfast supporter of Roe v. Wade for decades, and she supports a “woman’s right to choose.”

Later, her communications director, Tom Mentzer, disputed the Fox News report, saying it is merely their “interpretation” that she does not believe an unborn baby at 15 weeks is a human being. However, he did not actually confirm or deny that that is what Feinstein believes.

Feinstein……”all aboard the disorient express”

Feinstein is NOT HUMAN

Lessee – she is a globalist and they are being ‘edicated’ to think there should only be 500M persons on the Earth as anymore than that is untenable. Solution – hey babe – commit suicide. That would solve one problem and go to help save the world!

This is a non belief. Your comment is yours alone. Senator Feinstein does believe that a woman has a right to abort if she chooses. So be it!

The central problem is all taxpayers fund abortions. Since the initial ruling, two approximately equal sides of this issue have remained equally hostile. Fact is, abortion is not the business of government. It’s a private matter between obstetrician and patient.

Nobody has a problem with federal funding of planned parenthood providing pre-natal medical services to impoverished expectant women. The hostility arises when anti-abortion persons are required to share in the costs for all abortions.

The solution is to stop federal funding for abortion and move the entire responsibility of such prenatal medical services to the states. In turn, the states would determine what is funded and for how much. It wouldn’t solve the problem but both sides would be forced to equally forgive each other.

The states should never be the task maker or define funds for abortion. Churches should be [email protected] religious schools should not be not funded. I could make all private institutions pay their Bill’s.
But the Federal Government sees to that.

Fair is fair. If the Supreme court can not continue and decide that Roe vs Wade stays legal in all states, then we have no Justice anymore. Thank Trump with his 3 bias against abortion. Justice Steven’s decision is to keep abortion legal. And balance the misfit Supreme court.
Thank you Judge Stevens

What are you thinking? Please do not go off on Senator Feinstein. She is a good woman who; has passed numerous laws that make our country better.
Everyone has an opinion; but there is no reason to tear a good woman apart.
I am sure you believe women don’t have choices to what she must go through with an unwanted pregnancy.
Maybe you don’t care about women or their lives.

Someone should ask her how that baby could be growing & developing if you “didn’t have life”.

Always knew democrats were ignorant but now she proves they are just plain dumb.

I believe that Roe vs Wade should continue to be the law of the land..
I believe that Texas and all other states can not change the abortion rules and laws; as a political platform or religious belief.
I believe as I always have; that a woman has the right to choose abortion or not.
I do believe Governor Abbott has positioned himself in a bad corner.
Women and men alike will not put up with his backward positions on abortion.

I don’t think SHE is human. Democrats are pure evil.