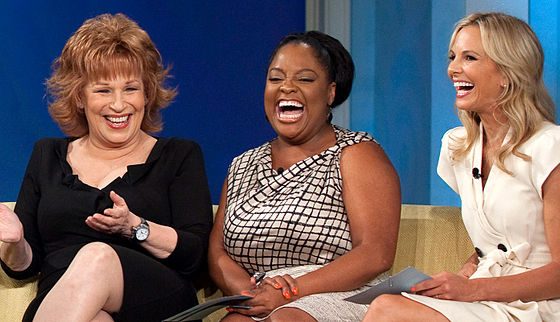 From left: Joy Behar, Sherri Shepherd, and Elisabeth Hasselbeck on an episode of The View at ABC Studios in New York City. Via Wikimedia Commons.
| Prolife Update Staff | National | 7

The liberal hosts of The View were excited by Newsom’s newest attack on the Second Amendment, a gun control law that would allow private citizens to sue gun manufacturers and sellers, in response to Texas’s abortion law. Co-host Sunny Hostin insisted pro-lifers should be supportive of the liberal law.

But first, co-host Joy Behar suggested the Supreme Court was at fault for not yet striking down the Texas law: “I mean, if they keep throwing all these things to the states, I mean they could overturn Brown versus the Board of Education and bring back segregated schools if they want in some states, then why do we need the Supreme Court? They’re on a path to oblivion.”

Guest host, CNN Republican Amanda Carpenter, seemed to agree the Supreme Court was at fault, but she bashed Newsom’s law as “a recipe for disaster.” She worried that every divisive issue would come down to the states: “We won’t have a nationwide debate about abortion, we’ll have a 50 state debate about abortion. And now we might apply those tactics to other divisive issues like gun rights? This is a recipe for disaster.”

Hostin condemned Carpenter for saying she was pro-life but disagreeing with Newsom’s anti-gun law. She lectured her on what being pro-life actually means, and unsurprisingly, it all came down to supporting liberal ideas:

It seems to me that if you’re pro-life then you would be pro-life across the board in terms of protecting the sanctity of life. Right? So Pro-lifers should be supportive of Gavin Newsom’s law.

So pro-life would mean you’re in support of, or against rather the death penalty, you would be against the manufacture of weapons of mass destruction, you would be against the manufacture of instrumentalities of death like guns. So I think what Gavin Newsom is doing is perfectly appropriate in line with what the Supreme Court has held that private citizens may be able to sue anyone anywhere anytime from any state. What’s good for the goose is good for the gander, right?

This show is TOXIC and unAmerican! They are not funny, misinformed and downright stupid. I am now no longer watching or supporting this network. When we take the House, Senate and the White House you better look out.

Hey Joy, can you sue your parents for ugly and stupid?

Joy Behar is a stereotypical hypocrite and liberal idiot. Even worse are the women that give her sway with her moronic opinions.

The living and the dead have always be segregated. Except at the voting booth.
I’ll bet Joy is glad HER mother chose life!

only brain dead people will listen to these old dried-up cows. most of what they say is lies because they can’t stand the truth. remember America………..NEVER, EVER TRUST A DEMOCRAT. we, the people, must vote all democrats out of office.