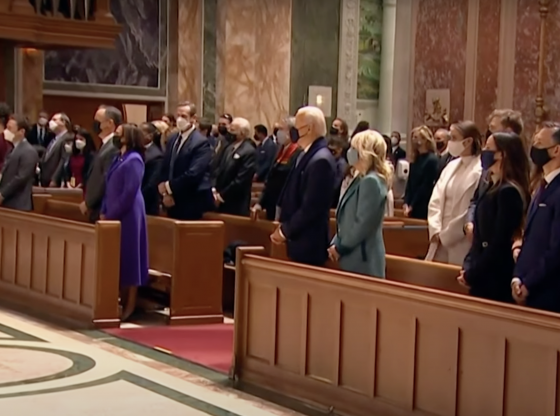 On the anniversary of the deadly 1973 Roe v. Wade Supreme Court decision that resulted in over 63 million babies being brutally slaughtered through abortion, Joe Biden celebrated the deaths of these children with the following statement:

The constitutional right established in Roe v. Wade nearly 50 years ago today is under assault as never before. It is a right we believe should be codified into law, and we pledge to defend it with every tool we possess. We are deeply committed to protecting access to health care, including reproductive health care—and to ensuring that this country is not pushed backwards on women’s equality.

In recent years, we have seen efforts to restrict access to reproductive health care increase at an alarming rate. In Texas, Mississippi, and many other states around the country, access to reproductive health care is under attack. These state restrictions constrain the freedom of all women. And they are particularly devastating for those who have fewer options and fewer resources, such as those in underserved communities, including communities of color and many in rural areas.

The Biden-Harris Administration strongly supports efforts to codify Roe, and we will continue to work with Congress on the Women’s Health Protection Act. All people deserve access to reproductive health care regardless of their gender, income, race, zip code, health insurance status, immigration status, disability, or sexual orientation. And the continued defense of this constitutional right is essential to our health, safety, and progress as a nation.

We must ensure that our daughters and granddaughters have the same fundamental rights that their mothers and grandmothers fought for and won on this day, 49 years ago—including leaders like the late Sarah Weddington, whose successful arguments before the Supreme Court led to the landmark Roe v. Wade decision in 1973.

At this pivotal moment, we recommit to strengthening access to critical reproductive health care, defending the constitutional right established by Roe, and protecting the freedom of all people to build their own future.

Joe Biden professes to be a “devout Catholic” despite his support for the killing of unlimited numbers of babies in the womb.

Killing babies (or anyone) for convenience sake is neither Christian nor health care!

Agreed, Biden and others like him who support this slaughter will have a rude awakening from God unless they repent.

I sure would like to see his judgement on earth first and then in front of God. Such an evil man. Nixon and LBJ were saints next to this creep.

We need to be celebrating the IMMEDIATE EXECUTION OF THOSE BABY KILLERS and ANY HORRIFIC POS WHO SUPPORTS THEM.

I could not agree more with you, but where do we start, should it be with Soros and his outfit who are financing the abortion industry worldwide.

That would be a good start.

The only thing the Liar in Chief and his Ilk are devout about is protecting being able to murder God’s creation of tiny humans AND ruining America. He’s not a Catholic nor a President. He’s a joke and an evil, angry incompetent fool.

He just proves his anti-black stance as more black babies aborted than others. Hevis about as catholic as the ants in the hills.

This is insane and we have a so call President who is a murder in the white house.

Beijing Biden is NOT President, nor is he Catholic.

No surprise, we had an illegal president from Kenya in the Oval Office for eight straight years… A real snake in the grass. And I blame him for all those men and women in blue who have been killed since his presidency.

The Bible clearly states that the shedding of innocent blood will desecrate your land, and there must be cleansed of this innocent blood, which will come by a fire which will fall in one night, in one hour, from the East to the West, and this government shall be no more, never to rise again.
I am nothing more than an old man who God has made a watchman by the Holy Spirit whispering in my left ear three days in a row to led me to the first of three pastors whom God had shown visions of the destruction of the United States.
Jesus said- “What I tell you in darkness, that speak ye in light: and what ye hear in the ear, that preach ye upon the housetops Matthew 10:27).” Thus, this is what I do.

A Fraudulent Catholic & a Fraudulent President. How can anyone who voted for him be surprised. He is, what he is, and has been exactly that, his entire life.

Biden ‘a devout catholic’ give me a break, he should be denounced by the leadership of the Catholic Church as should all his fellow ‘catholic’ baby killers in the democrat party.
This is highly unlikely to happen with leaders like Gregory, Cupich and Tobin calling the shots here in the US and in Rome.

Sorry but “access to reproductive health care” and access to elective abortion without medical need are not the same thing. Not long after it went into action back in 70’s I was working with a patient who was using abortion as primary method of birth control. It got to the point the ER Dr on her case told her one more abortion could kill her as had she had so many.
Nothing in the bills/laws in the states mentioned restricted access to reproductive care just elective abortion and that only after heartbeat was detected.
Abortion is stopping reproduction so not sure how it would fit as an item under reproduction care which implies caring for and supporting the process not stopping it. But I am very sure there are those who would disagree.

How do we ABORT Biden ? He is promoting MURDER !

Biden is about as much a Catholic as the ground I walk on. He is a DISGRACE. He needs to be kicked out of the church. DISGRACE.

Biden is a CINO. [Catholic in name only] Actions speak far louder than words. 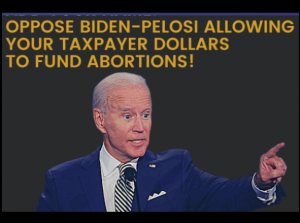 Science says the fully defined DNA of a human being, it’s sex, race, is created at Conception!!
We have a proponent of killing such a fully defined human in the womb in the White House, what a disgrace for this nation.
Where is the Catholic Church, to which this disgrace professes adherence to, with it’s very public critiqe on his position???
As a practicing Catholic myself, I find it is is the duty of the Catholic Church, especially the leadership in America, to come out in strong opposition against POTUS Biden’s position.

Joe Biden is neither Catholic nor a believer in Christ. Abortion is neither healthcare nor protecting women. He can’t profess to support Roe and then claim to be a Catholic. He refuses to use the word Abortion and instead uses Reproductive Health. He refuses to accept that by supporting Roe vs. Wade he strips the very fundamental rights he claims to protect from the babies killed by abortions.

Hypocrites! Biden and his ilk.

This man makes no sense at all. Replace the words “reproductive health care” with the word “abortion”. Murdering unborn children doesn’t make sense. On one hand our government is worried about the birth rate falling and in the next breath they advocate the killing of babies. Ol’ joe should be banned from making stupid speeches especially calling for the death of unborn children. He is dangerous to the continuity of the human race not to mention the inhuman act of killing children.

BIDEN is a MURDERER … he should be thrown out of the Church !

Confirms the hypocrisy of the Catholic Church. This clown should be excommunicated