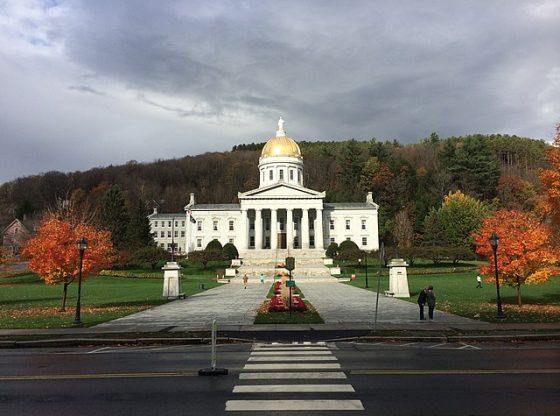 The Vermont State House, located in Montpelier, is the state capitol of Vermont, United States and the seat of the Vermont General Assembly. Photographed by Justin A. Wilcox on October 18, 2014. Via Wikimedia Commons.
| Prolife Update Staff | National | 10

The Vermont House gave final approval Tuesday to a state constitutional amendment that would keep abortion on demand legal even if Roe v. Wade is overturned.

The Washington Post reports the lawmakers voted 107-41 in favor of the pro-abortion amendment, Proposal 5, despite Republican lawmakers’ warnings about dire consequences for human life. In November, a majority of voters also must approve Proposal 5 on the ballot for it to be added to the state constitution.

Before the vote Tuesday, state Rep. Anne Donahue, R-Northfield, spoke out against the amendment, pointing to other bad U.S. Supreme Court rulings on eugenics and segregation, according to the report.

“We as human beings have made a lot of mistakes at times when we thought we were doing the right thing,” Donahue said. “When we start putting a current belief in the constitution, I think we’re playing with fire.”

In November, a majority of voters also must approve Proposal 5 on the ballot for it to be added to the state constitution.
Hopefully, more citizens of that state will vote against it, than for it, despite what the democrats voted for.
Life is precious. Whether in the developing stage or at full term. Science HAS proven, that anything with a heart beat IS alive.
God forgive us for terminating a life, that was never given a choice or a voice. And those that choose to be a voice, are cyber bullied or ostracized, to shut up. When man cares more for the life of a minnow, over a human being, what does that say about the human race?

Science has proven it is life at conception, life beget life of like kind. Cats produce kittens, dogs produce puppies. Man and woman produce humankind.
There is life in the egg of the woman, and there is life in the sperm of man, were there no life in either the egg or the sperm, then there would be no life produced.
The intentional ending of the life in the womb of the female is nothing less than murder and the shedding of the most innocent of all life, as according to the Bible will desecrate your land…
This government has allowed the slaughtering of approx. 70 million lives by abortion; for this and the embracement of the sexual abominations of this nation, God has been warning of the destruction of the United States by the nations of China, Russia, and possible one other nation.

God will not be mocked. America will reel what she has sown.

The states are where abortion should stay, if you want to kill your baby, go to a blue state where they will be more than happy to suck out your human life through a straw.

It’s amazing how addicted to murder some people are. This is akin to molesting a child, only it’s murder to an unborn child. Look how advanced this sick society has come – it not only advocates death for the unborn but are advancing death of the newly born. When will that become common place? Murder is murder. The murdering for the sake of murdering should not be condoned.

One if you support kill babies your not a Christ follower. Your Satans follower.