Beto Claims Pro-Life Law is ‘Not Good for Business 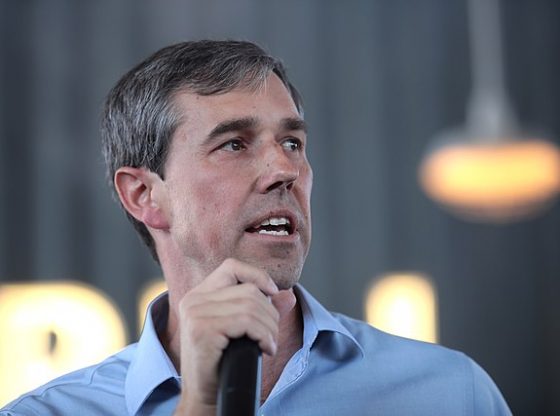 Speaking at a political rally in San Antonio, O’Rourke blasted pro-life Gov. Greg Abbott for hurting the state economy by signing a law that bans abortions once an unborn baby’s heartbeat is detectable. The former Democrat congressman is running for governor against Abbott in November.

“When Abbott tries to sell you on the idea that he’s good for business, just remember this,” O’Rourke wrote on Twitter, sharing a short video from the rally. In the video, he slammed the life-saving heartbeat law as harmful to women and “business.”

“If you are driving out women because you don’t trust them to make their own decisions about their own bodies and you place a $10,000 bounty on the backs of anybody that seeks to help anybody else make their own reproductive health care decisions, that’s not good for business in the state of Texas,” O’Rourke said.

Beto is an evil idiot, IMO 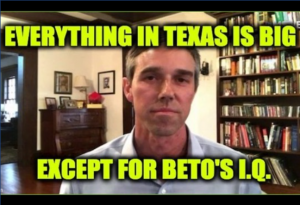 This guy is dangerous. Is he insane or what? This is the reason we need to get back control of Our government. The alternative is …

Yea, read his story about running over children in his car. What an evil leftist. He dreams of murdering children

wake up America. the only reason beto has any power to speak out against saving babies is because the evil, lying, hypocritical, leftist, socialist, and downright smelly democratic party supports him. beto is evil to the core. America…..we must vote out all democrats and rid free America of their evil.

He must have had vision of his ‘birth’!

Governor? O’Rourke’s resume is too well known. According to big media, he majored in English literature and fled from a DUI but was detained by a news reporter. He burglarized a college. He was a teen computer hacker. He also stole long distance service. Worked as a manny.

Now we now know he also supports abortion as an important commercial industry in Texas. He singled it out as one that needs protection and government funding. What a guy.

Doh?! Yep that’s right Beto. The abortion industry‘s business will definitely suffer. But children who are created with a purpose for their life through our creator will get to live. Despite your ignorance and heartlessness. The truth is no woman has to have a baby if she doesn’t want one. Take responsibility and use birth control diligently. There are all kinds out there and if you can’t use one there are always others. Oh and stop calling it “healthcare.” That’s a very misleading term for an ugly and disgusting act against a helpless, defenseless infant in the womb. You do know they use dismemberment right?

Beto O’Rourke is a complete IDIOT🥴! ANYONE WHO LISTENS TO THAT CLOWN🤡 WITH NO SCRUPLES NOR INTELLIGENCE DESERVES A GOOD SWIFT KICK IN THE A$$!

Come on people, Beto doesn’t care about “LIFE” in general or he wouldn’t have made that statement. He is PANDERING FOR YOUR VOTES AND WILL SAY ANYTHING (even lie) TO GET YOU TO VOTE HIM INTO OFFICE. THAT WOULD BE THE BIGGEST MISTAKE THAT TEXANS EVER MADE IN THEIR LIVES!

What he is saying is that “it is absolutely okay for a woman to go running around and having unprotected sex, getting pregnant, getting it torn out of her womb in small pieces even though it’s heart is beating and it feels pain AND IT IS AS ALIVE AS YOU OR I!” Anyone who believes that is truly living a life of evil actions…their own Soul is in jeopardy and those around them should leave that person to self destruct — and they will.

FYI: The CEO of Planned Parenthood drives around in a high end, very very $$expensive$$ sports car and lives in a huge mansion on acreage behind security gates. Hmmmmmm? How did she get there with all that $$? By literally killing human life and corrupting young women to think 👉it is the “Right” thing to do to have your heart beating baby, which feels PAIN LIKE YOU AND I, ripped out of your womb, and sold to the highest bidder of baby parts!👈.

ANYONE, AND I MEAN “ANYONE” WHO PREYS ON YOUNG CONFUSED VULNERABLE WOMEN TO DO THAT UNTHINKABLE ACTION — IS DEFINITELY IN LEAGUE WITH SATAN HIMSELF. How else do you think PPD’s CEO got sooooooooooo very rich???

ANYONE OBTAINING MEGA RICHES IS PARTNERING WITH SATAN HIMSELF BY “DESTROYING” INNOCENT HUMAN LIFE — one way or the other. They will tell you that didn’t happen, but it is the undeniable TRUTH. THEY are so caught up in the gluttony of Sin, that their whole life has darkened, their Souls turning black!

My guess is that the PPD CEO AND BETO already have a Pact to push ABORTION as fast as they can TOGETHER so “Beto the Bad” can be as rich and corrupt as the PPD CEO!

👉THAT is a “Union of 👹 Demons” the God Loving citizens of Texas really do not want happening!👈 Beto is too stupid to see what is happening to his Soul, but the God fearing Texans can see clearly the “DARK SIDE OF EVIL” he has chosen! NO VOTES FOR BETO!

“Their own bodies.” They simply cannot bring themselves to face reality. They know, Beto knows, that somebody else’s body is killed during abortion, but they all lie about it. No courage, no honor, no humanity.

Does that B2 is getting a smaller share from the “PLANNED PARENTHOOD” bribe fund?

Beto is an idiot.

He is exactly right. Abortion is good for business: the business of SATAN, who hates Mankind.

HEY, BETO, when you going to come collect our guns? Still waiting for you and your BS friends. Too bad you didn’t get aborted and save a lot of oxygen / hot air.

We need you and all the rest of the murder for money and convenience to please be deployed to Ukraine and fight for your love of destruction and human carnage! Or continue to hide behind our borders and be a coward and an anti Christ. True healthcare for America!

You’re not good for anything good or Godly!! You seem to break all foundational principles. SOP for most anti Christs! We’re not business materials!FYI

Robert O’Rourke is no Beto, he’s a ZERO.

AMERICA CLAIMS BETO IS SUBHUMAN EVIL SLIME THAT NEEDS TO DIE IN GITMO.

Pro-life laws are not good for the abortion industry. They are good for lots of other businesses.