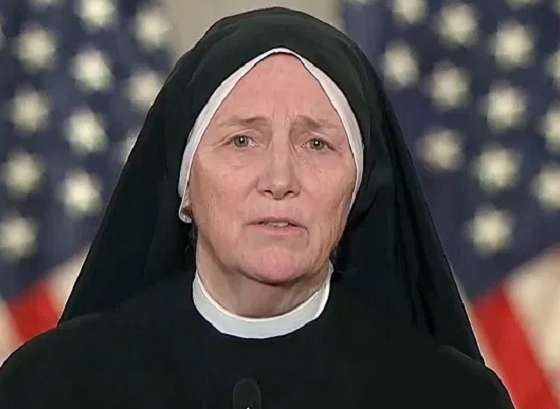 A beloved Roman Catholic nun, who is also a physician-surgeon and a retired U.S. Army colonel, is suing Washington, DC, over its COVID-19 vaccination mandate for health care workers. Thomas More Society attorneys filed suit on March 9, 2022, in the federal United States District Court for the District of Columbia on behalf of Sister Dierdre Byrne against the district’s mayor, Muriel Bowser, LaQuandra Nesbitt, Director the district’s health department, and the District of Columbia itself for their refusal to grant Byrne a religious exemption from vaccination.

Thomas More Society Special Counsel Christopher Ferrara shared how Byrne, who is a Roman Catholic religious Sister of the Little Workers of the Sacred Heart as well as a board-certified general surgeon and family physician, provides free medical services to the poor and the undocumented.

The lawsuit notes that Bowser has twice been previously chastised by the court for burdening religion by her abuse of “emergency powers.”

Democrats always demand that the Citizenry do as they are told … makes no difference if it is illegal or against morals of those ruled !

That DC stooge should be thrown out. Just another power hungry woman who is a socialist ass.

I think you must be thinking about the empty suit, fake Catholic, Liar in Chief. This woman is amazing and wonderful!

ALL AMERICANS LETS FILE A CLASS ACTION SUIT TO NEUTRALIZE THE COMMIE STOLEN GOVERNMENT. WE HAVE EVERY RIGHT TO FORCIBLY REMOVE THEM, AS OUR CONSTITUTION EXPLICITLY MAPS THAT OUT.

This just one reason to return District of Columbia neighborhoods back to Virginia or Maryland according to their original addresses. Eliminate the municipality and much of the baloney will vanish overnight.

God bless this holy woman of God! May she be successful in her suit against these horrible government officials who continually discriminate against faithful Catholic Christians!

Sadly we have a very arrogant and immoral administration was with this President. They have no respect for especially the religious people that serve a real purpose in life. Hope she wins, they lose. God bless her.

Thanks liberal zombies, you got what you deserved with the basement dweller, now you can starve with the rest of America when that incompetent nincompoop gets us bombed. He thinks he is a dictator and we peons have to obey his every corrupt whim. But hey, no mean tweets.

Muriel Bowser was, is, and always will be a Horse’s Ass! My apologies to the Horse!

I have received my vaccinations and my only problem was a very sore are after the 2nd shot. No problem thereafter with the booster. I wear a mask out in public but obviously not at home and/or in the homes of people I know who have been vaxxed since I’m compromised myself.
Know three people who were not vaccinated and passed. One very good friend called me on Holy Thursday with a breathing problem asking if I could get him oxygen. I told him to call his doctor because he needed a script. He said he did but doctor could not help. I told him to immediately call 911 since he’s compromised and he said he was afraid to but I said call them anyway as there isn’t anything to fear. Got a call on Easter Sunday 2021 that he passed… gone in a few day. I can still remember his stress while gasping for air as we spoke on the phone.
While I have Anti-Vaxxer friends and acquaintances who till me that I can still catch the Wuhan Coronavirus (Covid-19) all I say is that if I do, being vaccinated and from what I’ve seen, my case will probably be less sever and I’ll live through it.
Thank you President Trump for ‘Operation Warp Speed’ and the vaccine it produced along with the care procedures it introduced.