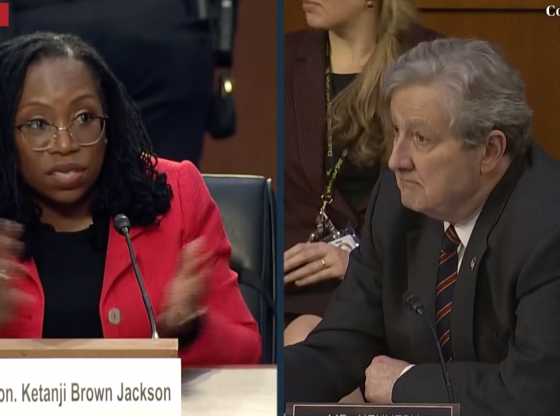 Kennedy asked, “When does life begin, in your opinion?”

“You have a belief?” Kennedy asked again.

“I have personal, religious and otherwise beliefs that have nothing to do with the law in terms of when life begins, “ Jackson responded.

… she ruled against the Trump administration’s decision to cut grant funding under the federal Teen Pregnancy Prevention Program. In Policy and Research v. HHS, she found that the administration had not properly grounded its action in the mandates of the Administrative Procedure Act. As a lawyer in private practice, Jackson wrote an amicus brief on behalf of women’s groups defending a Massachusetts law that kept abortion protesters away from the entrances of facilities.

SEN. KENNEDY: "When does life begin, in your opinion?"

He asked for your OPINION Judge! Oh, and by the way, a woman is an adult, female Human, they vary greatly in size, shape, color and intelligence. Hope this helps!

She knows when life begins. We all do, but some have to hide from it for political reasons. Unborn babies do not have party affiliation, do they?

Woman derived from Womb where when the fake provided egg is fertilized by the male provided injected sperm. Where in only women are physically able to give birth. Am nurture / breast feed the infant.!

Another coprolite who doesn’t know U.S. government authority is limited. She denies the simple fact that pregnancy is a private matter between obstetrician and patient. She believes federal bureaucrats have the authority to tax the entire population to fund a law considered murder by half the population. I wonder where these coprolites get their arrogance.