UNHINGED: Biden Trashes Pro-Lifers as ‘the Most Extreme Group in American History’

Home /National/UNHINGED: Biden Trashes Pro-Lifers as ‘the Most Extreme Group in American History’ 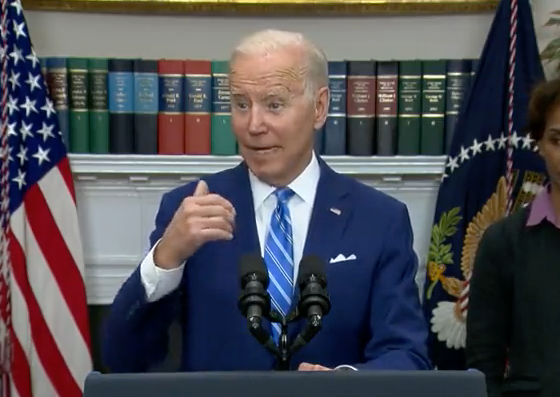 Joe Biden went on the offensive today when asked about the leaked draft of a Supreme Court decision overturning Roe v. Wade and he thoroughly trashed pro-life Americans. The remarks come one day after admitting abortion kills a child.

He said protecting babies from abortion was one of the worst things to possibly happen in America and claimed it would lead to taking away other rights — even though abortion itself denies the right to life.

“What are the next things that are going to be attacked? Because this MAGA crowd is clearly the most extreme political organization that’s existed in American history,” he said.

Biden told reporters he doesn’t want Americans to have the right to vote on whether babies should be killed in abortions, saying “I’m not prepared to leave” abortion “to the whims of the public at the moment.”

This Could be the Biggest Pro-Life Development in a Generation
WSJ: Pro-Aborts Could do the Unthinkable to Stop Roe Reversal

Yes, according to Bozo Joe those in the pro-life camp are the most radical Americans in the country. He does not have any issue with BLM & Antifa communist thugs looting , burning, and committing acts of physical violence. I guess “birds of a feather do flock together”.

To bad Biden’s mother did not abort him. Wonder what he would thing about that?

Someone needs to ask him which of his kids should have been aborted.

That’s a great question. Imagine a world where the only people allowed to have children are the elite. Gee, didn’t think that car salesmen were considered elite. Imagine life without Joe.

May the good lord gift EVERY ABORTIONIST THE MOST PAINFUL, INCURABLE FATAL DISEASE CONCEIVABLE. .

This is amazing. Dementia Joe is able to stave off his Dementia long enough to bash conservatives. Just another SMOKE SCREEN to help change topics and remind his base who they’re owned by. So instead of seeing the error of this administration they will concentrate on “one issue” instead of Joe’s failures. I guess that I’d be surprised if they didn’t cheat to get their way!

So, as a catholic you are NOT supposed to be PRO-life – yeah right….What a China CLOWN…..

The demonic evil side of abortion is that if you approve (“give an inch”) of murdering babies, the evil side will go (“take a mile”) for euthanasia of the elderly!!! So the first question for anyone promoting abortion is: “Are any of you now old enough to consider volunteering to be Euthanized tomorrow?” No? ———–I thought not!
Now there is a case of hypocrisy!

i am not opposed to abortion. i think that women who use this as a fall back on birth control, shouldn’t be breeding anyway.

That old demented man proves his brain is dead with all his ranting. He contradicts himself everyday. Kamala is just an idiot who isn’t even aware of why she is here. How many women had an experimental drug put in those bodies or be fired? Demorats are disgusting liars.

Well this is the way things are going. The Party of Democrat Socialists and their Ministry of Truth and Human Resources will tell us WHETHER / IF we can be born and when we must report for exterminative EUTHANASIA.

The absolute WORST thing to happen in America is HIM and Obama!!! Get rid of these disgusting Commie Fascists.

I don’t feel sorry for this helpless, demented old man but clearly, he didn’t think up all that vile spittle. He’s simply not capable of lucid thought. One of the army of socialist writers writes it and he reads it.

Ignore him because he’s not the dangerous one. We need to identify the authority and sources of what the CIC (Coprolite in Chief) reads and call them out. When they become famous, they will hide.

He defines Authoritarianism in his answer: “I’m not prepared to leave [the decision] to the whims of the public at the moment”.
Wake up, Read His Lips, the DemonCraps do NOT believe in democracy, they believe in and require submission to their beliefs. They have been lying about this since the 1960s Democratic Socialist Party hijacked America.

All of a sudden you realized Biden was unhinged?

Trash? My sainted father used to tell me: whoever treats you like the scum of the earth are scum themselves. Radicals? The genuine insurrection is the insurrection from inside the DEEP STATE with their deluded ‘useful idiots’ who suck up to their false projections of ‘equality.’ Look at the dwindling shelves in your supermarkets: you can see the ominous beginnings of SOCIALISM.

That demented old man is evil and should just go away.

That demented vegetable occupying our Oval Office only knows how to have fits or lose his train of “thought”.

All through the years when he felt threatened or felt cornered he offered to go out back and show them who was boss……what decent man does such a thing? I am a old lady….I do wish he would threaten me with such a bully remark.

He claims to be against abortion but supports it too! You can’t have it both ways Mr. Biden. Shame on you for compromising what is truth. The LORD won’t be mocked.

This is exactly the kind of angry temper tantrum you get from a dementia patient like senile, delusional Joe Biden. He doesn’t have the mental capacity to be president.

Get your asses off the couch and fight for the freedom that our military has died to preserve . Show some respect for the many who have died in battle fighting against Satan’s army of evil because in the end you will reap
What you have sown.. words have meaning
People of America and no bad deeds go unpunished. This is the spoken words of thee above. Can you honestly say that there is no punishment for wicked deeds in the end?????

Those who stand for nothing will parish in the end and be forgotten by there peers who are willing to fight for there countries freedom against all odds. I have seen the future said the Lord and is there for the taking for those who are brave enough
To stand and fight.

Really King Joe? Just when did this become “your” country and not “ours?”

Joe, among your many lies was your profession of pro life! Join the tribe. If you don’t lie, you don’t need your memory. WOW!

Yes women DO have the right to make decisions about control over THEIR bodies…BUT once they have chosen to ignore contraception or to abstain from sex and a child is conceived.(..and the mother’s life is not at risk and they have not been raped), then.they do NOT have control over the life of that child. Lawyers protect people who cannot stand up for themselves…and we should do the same for children in utero. Do all of these women protesting abortion not realize they would possibly not even be here if their mothers had had easy access to abortions? Do they realize they are killing future women who could contribute so much good in our society?
Do people not realize all of the dishonesty that was involved in the Roe VS Wade hearing? Even the doctors admitted to routinely giving out false, never checked info, and 16 year old Roe never wanted an abortion and did not have one and was paid to be quiet and her child was given up for adoption. Even Justices on the Supreme court later relayed the extreme pressure they had from their wives during the women’s rights push for freedom to abort. And once sonograms were invented, the top abortion doctor cried to see the child torn apart and “screaming”.and to realize he had done that to his own daughter! There are so many people who are yearning to adopt or be able to have a child while millions have been aborted. People step on small bugs all the time…but not little frogs or kittens…what value do we give to human beings…50% roughly that are future women?!

Walk softly and carry a big stick! We Conservatives have been patient with the wild eyed big mouths for a long time. This to shall pass. How that happens is not up to you! Nuff’said.