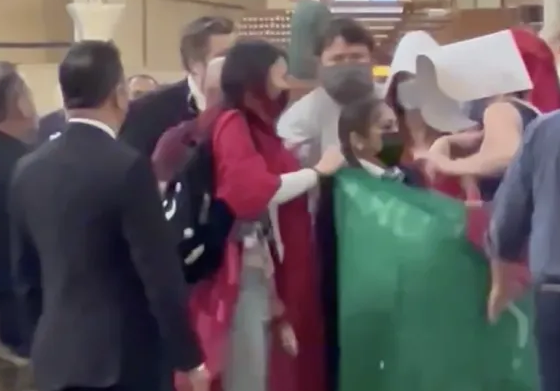 Costumed protesters struggle with personnel of the Cathedral of Our Lady of the Angels in Los Angeles during Mass on May 8, 2022. | Screenshot from video provided by Bradford Adkins via CNA
| Prolife Update Staff | National | 2

Several protesters dressed in “huge hats” and “red, hooded gowns,” disrupted a Mass at the Cathedral of Our Lady of the Angels in Los Angeles Sunday morning, a parishioner told CNA.

The description of the protesters’ attire provided by the parishioner, Bradford Adkins, resembles costumes worn by members of the pro-abortion group Ruth Sent Us, which threatened to disrupt Catholic Masses on Sunday, Mother’s Day.

As of 10 p.m. EDT on Sunday, the group did not appear to have taken responsibility for the protest in Los Angeles. Representatives of the group did not respond to CNA’s request for comment prior to publication.

A video posted on Twitter captured the incident, which took place at the cathedral’s 10 a.m. Mass. Adkins told CNA the demonstration began to unfold shortly before Communion.

Marxists try to disrupt Mass at Cathedral of our Lady of the Angels. Security, ushers and parishioners said they were not having it.#cathedral #Catholic pic.twitter.com/HlN8yHxPKL

They should come to our parish.
Bet they won’t return!!! Just sayin