Leftists plan to blockade and attempt to shut down the Supreme Court in two weeks as a decision is expected soon on whether the nation”s high court will overturn Roe v. Wade and allow states to protect babies from abortion.

The Supreme Court reportedly has the votes to overturn Roe, according to a leaked U.S. Supreme Court draft ruling that overturns Roe v. Wade.

In early May, Politico broke the news about the leaked draft ruling on the Mississippi abortion case Dobbs v. Jackson Women’s Health. The draft, which is not final, shows five of the nine justices agreeing to overturn Roe and allow states to protect unborn babies from abortion again.

The Supreme Court could release the actual decision as early as next Monday, June 6th, although most Supreme Court observers say the decision will more likely be released toward the later part of the month. Expecting that, radical pro-abortion activists have planned to blockade the Supreme Court on June 13th — and it’s a blockade that could get violent.

Where’s the razor ribbon Nancy? Another assault on democracy. Bring in the brown shirts and teach them a lesson.

Are they serious? These rabid nutjobs. Just like “their” leader, crazy Joe. He’s making noise about a civil war to remove the Republican party. That would be the greatest mistake in history. That would be like trying to take our hundreds of millions of guns. Nuff’said.

SHOOT THEM? Are you waiting for them to kill a scotus? Probably.

And yet WE’RE the insurrectionists??!! HA!! 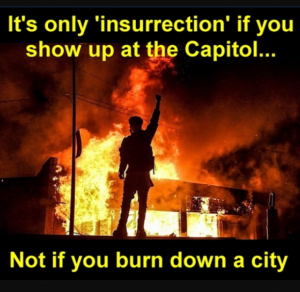