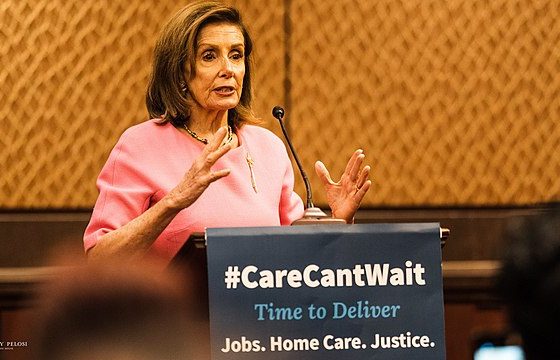 House Speaker Nancy Pelosi (D-Calif.), speaking to reporters on Thursday, was asked to respond to the Catholic position on abortion as murder, and to address the violent attacks against pro-life pregnancy centers and churches nationwide. Pelosi yet again used her purported Catholic faith to promote and defend abortion, and refused to even give an answer regarding the wave of violence being visited against churches, pregnancy centers, and pro-life offices.

One reporter began by asking Pelosi how she reconciles her pro-abortion stance with the pro-life stance of the Catholic Church. “Do you agree with Pope Francis and Pope John Paul II that abortion is murder?” the reporter asked.

In her response, Pelosi side-stepped the actual question at hand, refusing to say whether or not she believes that abortion is murder. “What I agree on is that whatever I believe, agree with the pope on, is not necessarily what public policy should be in the United States as people make their own judgments, honor their own responsibilities, and attend to the needs of their families,” she said.

Pelosi was then asked for her response to Republican claims that Democrats’ rhetoric on abortion and refusal to condemn attacks against pro-lifers was contributing to the violent attacks taking place nationwide.

Nancy Pelosi when asked about attacks on churches and pregnancy centers:

“This talk of politicizing all of this is, I think, is something uniquely American…”

“I’m a very Catholic person, and I support a women’s right to make her own decisions.”pic.twitter.com/ySrBkcG1aU

PELOSI should be squirming from death row.

Shes a political hack and needs to be eliminated asap

That women is as evil as they come. Yes I mean Nancy P speaker of the house of corruption. She deserves nothing but distain from every God fearing patriot. Her time as speaker is coming to an end they will not elect Her again. Her and her commie Marzist
friends will not win the Nov elections.
Biden the criminal President who has lost His way mentally is just about finished as the corrupt lier He has always been. Even His own party is done with Him. Time to go to the rest Home cheater Biden.

yes she is, her rude awakening from God is coming soon

Why can’t we light her up now and give her a head start on Hell !

She’s pretty hard to catch. Her broom is super charged.

I think all the abortionist should be aborted right now … let them feel the pain that the unborn babies feel when they are torn limb to limb !

You cannot have it both ways. Nan wants this to be a private matter but paid by taxpayer money. I agree it’s a private issue between obstetrician and patient. But as such, private funds should be used.

you are right, this should never have been made into a law as it stands ???? No taxpayer money.

I believed that I impregnated a friend with a child. But she had taken care of the problem, not sure if she was pregnant or not. But after this experience God did straighten me out
!! From drinking and smoking dope and what else, I was totally change. I met a girl who was involved with a religious cult and then attended a course of videos that totally wiped out my belief in who I was. When you find yourself not knowing who you are then you have a problem. That is where I was. If not for the Catholic church I would have sold my house and ended up on a street having nothing. Nancy Pelosi and Joe Biden are evil people.!!!

Watch Pelosi squirm when she meets the LORD on the Dies Irae, the Day of JUDGMENT. I myself have enough to worry about, but I would not to be in Pelosi’s place, given all the evil deeds she has committed, approved or sanctioned while claiming to a be a follower of Jesus Christ.

The problem with Pelosi’s statement is people ARE NOT ALLOWED to make their own judgments, honor their own responsibilities, and attend to their own needs. They’re required by Pelosi’s queenly mandate to pay for other people’s responsibilities. If we all agreed on everything, we wouldn’t need laws.

That woman will burn in hell. She is a traitor to her supposedly Catholic Faith and she should be ex-communicated. Why hasn’t that been done?

Pelosi is evil period. When the democrats can incite violence to try to retain power and exert control everyday American citizens they are pushing a communist agenda. Pelosi thinks she is a queen, she acts like a certain French queen, maybe she should study what happened to that queen. Vote her out in numbers that all her election rigging can’t counter. Have poll watchers at every place, have one liberal and one conservative watch every vote counted and paper ballots, no machines that can and will be hacked. Mail in votes must be verified and ballots locked up between counts. No suddenly found votes after election day.