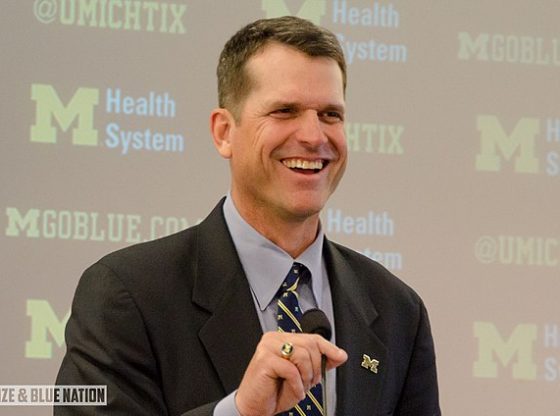 University of Michigan football coach Jim Harbaugh is putting his money where his mouth is. Fresh from condemning abortion and urging people to be pro-life, the successfully coach urged his players to rejected abortion, saying he and his wife would raise any child who students saved from abortion but couldn’t raise.

In a new interview, Harbaugh responded to criticism from abortion activists after he spoke out for life.

“Let’s discuss it,” Harbaugh expanded on his pro-life views to ESPN’s Gene Wojciechowski.

“I’ve told [them] the same thing I tell my kids, boys, the girls, same thing I tell our players, our staff members. I encourage them if they have a pregnancy that wasn’t planned, to go through with it, go through with it. Let that unborn child be born, and if at that time, you don’t feel like you can care for it, you don’t have the means or the wherewithal, then Sarah and I will take that baby.”

Margaret Sanger was born in 1879 in New York, one of 11 children born into an impoverished family. Her mother was Catholic, her father an atheist. Her mother had several miscarriages and died at an early age. Though the cause of death was listed as tuberculosis, Margaret always attributed her early death to the fact that her mother was weak from bearing so many children. This deep-seated disdain for large families would encompass her life and contribute to a belief that women should limit—or be limited to the number of children they could have.

Sanger eventually went to nursing school, then married and had three children. She and her husband became immersed in the bohemian world of Greenwich Village, where they lived. It was at this time that she joined the Women’s Committee of the New York Socialist’s Party and began to advocate for the sexual education of women. Though she never finished nursing school, Margaret began working as a nurse in a poor immigrant section of NYC, where she grew to believe in—and teach—the importance of birth control.

Then, in 1914, she started her own publication which advocated for women using birth control. Because she mailed out this publication, she was in violation of the Comstock Act, which made it illegal to disseminate immoral materials through the mail. Facing possible jail time for her actions, Margaret fled to England, where she continued to do research on birth control and contrive a plan to disseminate it.

In 1915, knowing that the charges in the US had been dropped against her, Margaret returned to the US and, a year later, opened the first birth control clinic in the states. A little over a week later, she was arrested and spent 30 days in jail for again being in violation of the Comstock Law. Sanger would later appeal the conviction, which would not be overturned. However, the judge in the case did make an exception to the law that would allow doctors to prescribe contraception for medical reasons. This opened the door for the future legalization of birth control.

In 1917, Sanger began to publish and edit “The Birth Control Review”, a birth control advocacy publication, which she edited until 1929.

In 1921, she established the American Birth Control League, which would eventually become Planned Parenthood. It didn’t take long for Sanger to become a public voice at the forefront of a reproductive revolution. She was not only a powerful driving force in the legalization of birth control; but also advocated and spread eugenics in the spearheading of the birth control mentality—with the ultimate goal of eliminating unwanted people. Sanger wrote:

“On the other hand, the mass of ignorant Negroes still breed carelessly and disastrously, so that the increase among Negroes, even more than the increase among whites, is from that part of the population least intelligent and fit, and least able to rear their children properly.”
Source:
~W.E.B. DuBois, Professor of Sociology, Atlanta University. “Black Folk and Birth Control.” [Margaret Sanger’s] Birth Control Review, Volume XXII, Number 8 (New Series, May 1938, the “Negro Number”), page 90.

“We do not want word to go out that we want to exterminate the Negro population and the minister is the man who can straighten out that idea if it ever occurs to any of their more rebellious members.” ~ Letter from Margaret Sanger to Dr. C.J. Gamble, December 10th, 1939

“Sanger associated with racists and anti-Semites, people who despised everyone who was not a Nordic god or goddess, and those who demanded coercive eugenics programs to eliminate ‘lesser’ humans. The whole bunch, of course, participated in continuous vicious attacks on the Catholic Church….The malignant influence of Sanger and similar thinkers not only has ruined the West to the point that it is dying, but seems hell-bent on corrupting the rest of the world as well.”
Clowes goes on to say: “The Birth Control Review” frequently highlighted the mission of its parent organization: ‘The American Birth Control League. Its Aim: To promote eugenic birth selection throughout the United States so that there may be more well-born and fewer ill-born children―a stronger, healthier and more intelligent race.’”

We see this eugenic philosophy in the extermination of six million Jews during WWII. And Sanger had people with known Nazi connections and sympathies writing for “The Birth Control Review”. According to Clowes, “The Birth Control Review” is larded with articles written by such “luminaries” as Lothrop Stoddard, American Birth Control League board member and author of the books “The Rising Tide of Color Against White World-Supremacy” and “The Menace of the Under Man”, and Ernst Rudin, Adolf Hitler’s Director of Genetic Sterilization and founder of the Nazi Society for Racial Hygiene—the organization behind the master plan to exterminate Jews during World War II.
Stoddard traveled to Germany to be welcomed by Heinrich Himmler and Adolf Hitler himself. In fact, he was so popular in Germany, his writings were incorporated into Nazi school books. (William L. Shirer. Berlin Diary: The Journal of a Foreign Correspondent. New York City: Alfred Knopf, 1941, page 257)

We can thus say with certainty that Planned Parenthood honors a person (Margaret Sanger) who not only befriended authentic racists and Nazis, but gave them a widespread platform to spread their poisonous propaganda. In fact, Planned Parenthood names its most prestigious award after Margaret Sanger, allowing her eugenic legacy of hatred and intolerance to live on. Today, PPFA does everything it can to eliminate those they consider the unfit of society and to profit off women in crisis pregnancies. It stealthily builds abortion facilities in impoverished and/or ethnic neighborhoods, targets blacks and Hispanics, and worms its way into our schools so that it can increase its client base by corrupting our children.

In her articles and speeches, Sanger gave evidence time and again that she considered there to be a close link between birth control and eugenics. As the author of articles entitled “The Eugenic Value of Birth Control Propaganda” and “Birth Control and Racial Betterment”; Margaret Sanger showed the world her true colors and the underlying reasons why she thought the world needed birth control.
Eugenics goes even deeper than racism; because the philosophy espouses that it has the right to determine who should live, who should reproduce, and who should die.

Yes, the legacy of this one woman is alive and well. Her insidiousness, and that of her organization Planned Parenthood, has left an indelible mark on our culture and society. A mark of evil.

A big win for Jim and his family on the gridiron of life🤟.