MSNBC Has New Label for Pro-Lifers

Tiffany Cross’s MSNBC show is not known for nuance and well-argued analysis, but the Saturday edition of The Cross Connection still managed to one up itself when pollster and MSNBC contributor Fernand Amandi repeatedly claimed that the Republican Party is a fascist party and Roe v. Wade‘s downfall proves it.

Cross wanted to know the state of mind of Latino voters heading in the midterms, “you and I have talked about, there was a shift for a while it seemed like a lot of Latino men were shifting to the Republican Party. Now in the post Roe v. Wade decision, there’s been another shift. I caution that some of this is geographic and you know, very specific to different areas, the Latino community is a huge umbrella community, I’m curious your thoughts on what is happening there.”

Amandi agreed that geography is playing a role, but “what has happened here is I think all Hispanic voters, and again all American voters, there’s really no reason to single one group out or another, they have now seen with the decision to overturn Roe v. Wade, this is Republican extremism, not in the theoretical, but in the here and now.”

In Amandi’s mind, voters equate pro-lifers with fascists, “So faced with that reality, not a fear tactic or scare tactic, I think the voters are saying ‘timeout, hold on, these Republican MAGA fascists are as bad as folks are saying because we see it now directly impacting our lives.’”

Keep on reading at Life News.

Those who support abortions are the Fascists = as in “kill, baby, kill”……

Liberals are without exception all fascists. Some of them are too ignorant to realize it and the rest of them don’t have the cojones to admit it. 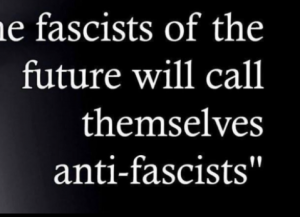