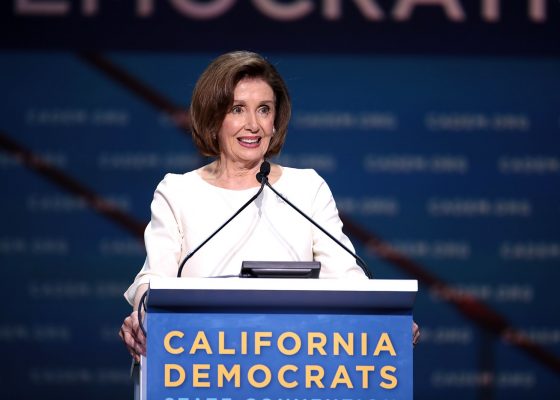 Democrat projection knows no bounds. California Democrat and Speaker of the House Nancy Pelosi claimed that the pro-life movement is “sinful.” She believes that the movement fighting to end the murder of unborn children is sinful. It’s ironic that she, herself, has been facing church discipline for being on the wrong (sinful) side of the issue. Pelosi drew some media coverage when her archbishop refused to give her the Catholic communion elements due to her unrepentant sin. Still, she finds the audacity to call anyone who opposes killing children in the womb, a sinner.

From the Catholic News Agency:

“The fact that this is such an assault on women of color and women — lower income families is just sinful. It’s sinful,” the Democrat from California said during a “reproductive health” panel on Aug. 26. “It’s wrong that they would be able to say to women what they think women should be doing with their lives and their bodies. But it’s sinful, the injustice of it all.”

She went on to claim that republicans cause unmeasurable amounts of pain on the American people.

“Emboldened by the radical Supreme Court, extreme MAGA [Make America Great Again] Republicans are inflicting unimaginable pain on women and their families,” Pelosi warned at the beginning of the panel. “Indeed, today, American women are not as free as their mothers and their grandmothers were.”

The Speaker is either very confused or quite evil. She has opted to use her Catholic Faith in the abhorrent sin of abortion many times in the past. At CNN’s “State of the Union” on May 15th, 2022, Pelosi invoked God to defend her stance on killing children:

“We’d rather have it resolved, rather than an issue for a campaign, because we’re talking about a woman’s decision-making, her family, her God, her doctor, her own decision-making. So we have to fight the fight on the issue now. I think that it would have an impact on the elections. But right now, I want everyone to just focus, just focus on what this does and what this means to you.”

There are so many examples of Pelosi heretically defending child sacrifice. It’s quite shameful that she was still able to receive communion at the Vatican in June of this year.

Politicians need to answer for their policy stances, and Nancy Pelosi must answer for her heresy. May God show her mercy.

Governor Gavin Newsom: The Best Murderer in the West
Assistant Principal Brags About Discrimination Against Catholics and Conservatives

LISTEN UP….A True CATHOLIC does NOT Promote ABORTIONS. I was Raised as a CATHOLIC. JESUS said…YOU are Either With ME or Against ME. MOSES said….WHO is on the LORD’S Side????? From SamuraiQueen aka CHIAKIA. 😄😄😄😇😇😇😉😉😉

It really doesn’t matter what I , or anyone else, thinks about Pelosi’s position on Abortion…but at her rather advanced age, she’ll be facing the ultimate of God’s accountability sooner rather than later; nobody lives forever….Heaven or Hell……I don’t like her odds. Hard to explain how you are such a DEVOUT Catholic and then PREACH AGAINST THE TEACHINGS OF THE CATHOLIC CHURCH.

The host should explode into flames in her mouth. Murders of infants guaranteed the hottest corner of hell, right beside Biden and Hitler.

What a wicked old HAG! No wonder her husband sniffs the cork.

I will pray for her.

Nancy Pelosi’s team leaders are blaspheming against Creator GOD as if HE doesn’t exist. Nancy Pelosi and her cohorts will be held accountable for their allegiance with the Kingdom of darkness, and their agreement of murder of the unborn child. The Democratic Socialist Marxist Communist Regime EMBRACE THE LUCIFERIAN DEATH CULTURE, NWO, GREAT RESET, GLOBALIST ONE WORLD GOVERNMENT of whom are on the path of the Destroyer, with explicit hatred and rebellion against God’s Kingdom, His Creation, His Holy Written WORD. The stench of death is polluting the Political arena as these wicked leaders approach the time of Judgment. Scathing, wicked, perverse lies, are opening the portal of Hell to deceive the populous, with Lying Spirits waiting to inhabit dead souls. How horrific is the fall of Speaker of the House, Nancy Pelosi. The wicked, evil politicians inhabiting the White House are falling. “It is a fearful thing to fall into the hands of the Living GOD” Hebrews 10:31