Stacey Abrams Believes in Abortion Up Until Birth

Home /State/Stacey Abrams Believes in Abortion Up Until Birth

Stacy Abrams argued that abortionists should be able to kill their babies up until the moment of birth.

She often steals the public spotlight. Abrams ran for Governor of Georgia in 2018, brutally lost, and claims that the election was stolen. Abrams, a Democrat from Georgia, is running for Governor once again, and on “The View” she claimed that the proposed 6-week abortion ban is ‘arbitrary’ – a comment some have viewed as selfish and uninformed, from a politician trying to push an agenda.

Offering remarks during a Wednesday appearance on The View, Abrams insisted that abortion is “a decision that should be made between a woman and her doctor, that viability is the metric, and that if a woman’s health or life is in danger, then viability extends until the time of birth.”

Abrams did not expound on what constitutes as a woman’s life or health being in danger.

“I believe that abortion is a medical decision, not a political decision,” she said. “And arbitrary, politically defined timelines are deeply problematic because they ignore the reality of medical and physiological issues.”

“For example, a six-week ban tells women they have to make reproductive choices before they know they’re pregnant. And that arbitrariness extends into these artificial timelines,” Abrams said.

Abrams also declared during her appearance on the show that no one believes “there should not be a limit” on abortion, adding that “the limit should not be made by politicians who don’t understand basic biology or, apparently, basic morality.”

Experts agree that an unborn baby at 6 six has a heartbeat and other functions proving that he/she is an advanced form of life, and certainly not a ‘clump of cells’ that can be killed. Stacey Abrams is choosing the selfish freedoms that her left-wing base demands over the life of an unborn child. Abortion up until the time of birth is an issue that is an evil that goes with very little coverage. While abortion in the third trimester is rare, unborn children born at only 5-6 months are frequently able to go into incubation and live long and healthy lives. 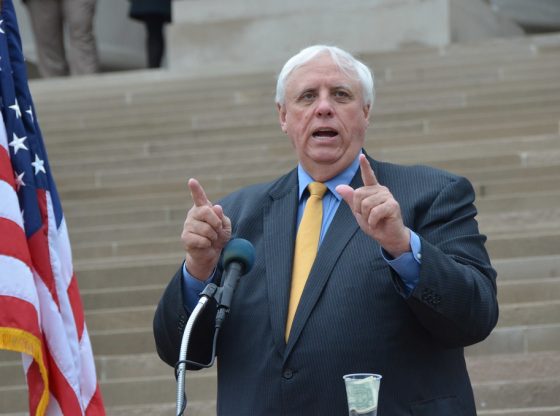 Stacey, abortion is not a medical decision. It is a MORAL decision. It is the free will given to us by God. God may not agree with you. Paths that we choose to follow have consequences. It’s your choice but, that doesn’t absolve you in God’s eye.

Abrams is a racist, bigot, AMERICA hating felon. She illegally brought heavily armed black panthers to intimidate voters in Atlanta. This was direct violation of GA law. She hired mules to dump votes. Her fat ass belongs in GITMO. 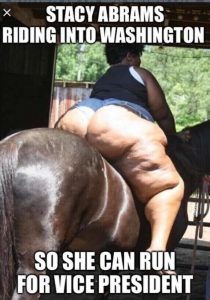 We believe in ABORTING her now.

I keep wondering when Georgia will have had enough of this charlatan who aspires to be a leader. If she were an effective leader, she’d still be in the House and wouldn’t have had to continue her empty shriek for five years. While serving in the House, she supported the old useless democrat plank and her voting bloc tossed her like a moldy salad.

She made bad choices and now is stuck with the democrat party dominated by a powerful socialist oligarchy. She’ll never outlive that reputation and needs to find a better use of her education. Her name now is synonymous with bankrupt, dependent people and a nation on the brink of collapse. If allowed, her brand of politics will destroy the nation.