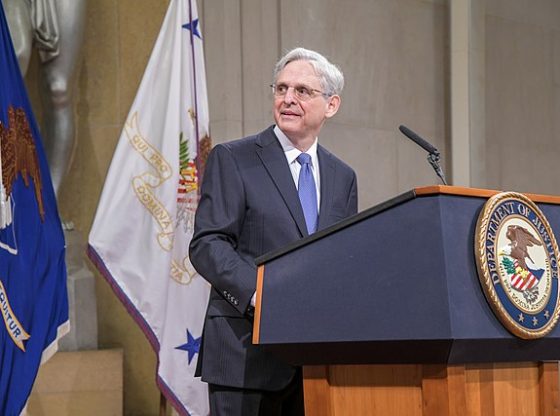 A small army of FBI agents arrested a pro-life counselor on the 23rd of September 2022. The story was shocking then, but recent findings indicate that the order came directly from the top.

Mark Houck is a family man and a counselor to those in need. He was helping women outside of an abortion clinic find alternatives to killing their children when a man began aggressively accosting his son. Houck confronted the man and pushed him off of his son. The man fell to the ground and eventually sued Houck. A local judge threw away the case but eventually, Biden’s Department of Justice arrested Houck at gunpoint and traumatized his family.

According to reports, Houck actually offered to go with the FBI willingly in June of this year. They preferred to make a scene out of his arrest in order to intimidate his political allies.

Attorney Peter Breen told the Daily Signal that the Justice Department sent “20-plus heavily armed federal agents with shields and long guns… to intimidate pro-life people and people of faith.”

Breen explains that Houck’s arrest was not standard procedure in any way. “These prosecutions are usually run by the local U.S. attorney’s office.” This one, however, was different. “On the day this broke out, main justice was handling the media and it was put out that one of the senior trial attorneys from the Department of Justice would be litigating this case.”

He went on to explain that this level of force is generally reserved for crimes involving “guns, drugs, the Mafia.”

Because of this, it could only be approved by the highest levels in the Department of Justice. “We don’t know if the attorney general himself approved the raid, but presumably one of his top aides did.”

Senator Josh Hawley and others are pursuing the FBI full force in response. Hawley is set on holding Garland’s feet to the fire. He wrote Garland a letter demanding that he testify. Here is a small excerpt:

“As Houck’s wife said, when they saw 20 or more agents arrest their father at gunpoint, ‘the kids were all just screaming,’” Hawley wrote. “To say the least, using this kind of force to make an arrest for a single charge of simple assault is unprecedented. I want to know from Merrick Garland directly why Biden’s DOJ is arresting Catholic protestors like terrorists – complete with SWAT-style tactics – while letting actual terrorist acts like firebombings go unpunished.”

Those fire bombings were frequent and devastating to these facilities that care for pregnant women.

James Harden, president and CEO of CompassCare Pregnancy Services, said that he gave investigators video surveillance footage and they’ve done nothing. “It’s Day 106. There have been no arrests. There have been over 50 attacks on pro-life pregnancy centers. And our patience is at an end,” Jordan mentioned that there have been a whopping 17 fire bombings alone.

In an interview with Fox News he said the following:

“I want to know who signed off on this,” referring to the raid on Houck’s home. “If that is Merrick Garland, he should be removed from office… It’s time to take the gloves off here and defend the rule of law.”

Sean Hannity mentioned that Garland put out a memorandum telling FBI that they are not allowed to talk to elected officials. This happened after Representative Jim Jordan of Ohio claimed that more than a dozen FBI whistleblowers came to him about politicization and corruption in the FBI.

“I want to know who signed off on this,” referring to the raid on Houck’s home. “If that is Merrick Garland, he should be removed from office… It’s time to take the gloves off here and defend the rule of law.”

Sean Hannity mentioned that Garland put out a memorandum telling FBI that they are not allowed to talk to elected officials. This happened after Representative Jim Jordan of Ohio claimed that more than a dozen FBI whistleblowers came to him about politicization and corruption in the FBI

Hawley has a record of sharp questioning and powerful debate. Another senator going after Garland is Chuck Grassley. He also wrote a letter full of pointed questions that Breen said he wouldn’t want to have to answer. Here is a small excerpt from Grassley’s letter:

“I urge you to alter this course immediately. I urge DOJ to implement a more explicit and comprehensive approach to combat rising crime. Using past responses to violent crime as a guide, DOJ should create a specific task force to combat violent crime, reinvigorate Project Safe Neighborhoods as a powerful violent crime-fighting tool, fill the gaps left by progressive prosecution, and leverage DOJ grant authorities to incentivize state and local authorities to prosecute crime in our most violent cities.”

Will strongly worded letters be enough? No, absolutely not. This is the result of radical corruption and will require substantial action. The FBI has become a political arm of the left wing. Whether it’s a complete abolition of the bureau itself or a thorough restructuring, we need to demand our candidates take action on the FBI. Merrick Garland must be fired in disgrace, bare minimum. Salvaging and depoliticizing the Department of Justice must be a top priority of any republican candidate for president.

Shocking: Killer Cuts Baby From Mother, Kills Both
FBI Raids Another Pro-Life Advocate, This Time for Praying and Singing

This assault on the people must end now. This will end. If you know what I mean.

As we see the leaders at doj & fbi are the Devil representative .

Merrick Garland is an evil man. He is an outright coward.

You mean the attacks are coming from the one who acts like he was a partial abortion?

This behavior by the FBI is criminal. To divert agents from pursuing violent crime to arresting citizens for nothing more than singing and praying at abortion centers is illegal. How about going after the violent firebombing of pro life centers by Jane’s Revenge. Sounds like the free reign of BLM is continuing.

Failure to punish the FBI will embolden it to raise the abuse. Since it has reached an historic peak, new leadership is necessary. Dozens of agents have volunteered testimony of abuses by Attorney General Garland.

If he continues to encourage the abuse or simply looks the other way, the FBI will be tossed by disgusted American citizens into the same dumpster where Germany’s gestapo and Russia’s KGB now reside.

The FBI has more than 30,000 employees and about 13,000 of them are special agents. The vast majority of these agents are dedicated American patriots who disapprove of our CIC (Coprolite in Chief) as much as ordinary citizens.

I’ve known some of these agents and respected every one. Seems a few at the top, particularly the AG, have become anti-American radical democrats. They believe the likes of our current CIC will feather their careers in spite of constitutional violations.