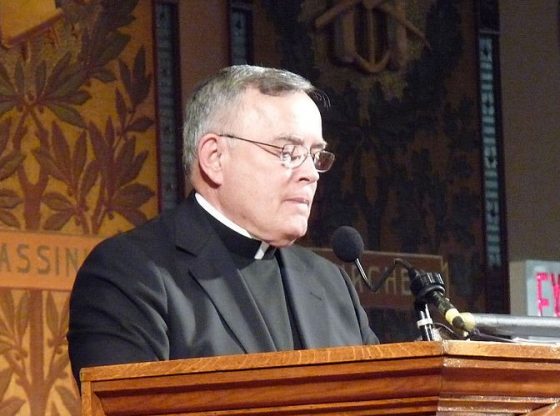 Archbishop Charles Chaput says that Joe Biden is no longer in communion with the Catholic Church due to his stance on abortion and priests should not give him communion. At an event this weekend, Chaput said that Joe Biden “is not in communion with the Catholic faith” and that “any priest who now provides Communion to the president participates in his hypocrisy.” This is one of the strongest condemnations of Joe Biden’s stance on abortion as a self-professed catholic and it comes from a very high ranking voice in the Church. Biden has promoted abortions up to birth repeatedly since the Dobbs decision overturning Roe v. Wade and his introduced multiple policies and supported legislation to implement abortions up to birth nationwide.

The archbishop continued: “Mr. Biden’s apostasy on the abortion issue is only the most repugnant example. He’s not alone. But in a sane world, his unique public leadership would make — or should make — public consequences unavoidable.”

“When you freely break communion with the Church of Jesus Christ and her teachings, you can’t pretend to be in communion when it’s convenient,” Chaput said.

“That’s a form of lying. Mr. Biden is not in communion with the Catholic faith. And any priest who now provides Communion to the president participates in his hypocrisy.”

Facing the prospect of his party losing the House and the Senate, pro-abortion President Joe Biden has ramped his pro-abortion rhetoric as the mid-terms draw near.

Is being Pro abortion sign of a good Catholic??

No pro-abort can be Catholic. The Liar in Chief and Piglosi are frauds.

Biden and his catholic family, the head of the house of Reps. forgot her name and her family, the heavyweight who married the rich Heiress forgot his name as well…ALL Catholics, liers, traders, who hang out with the devil ALL take communion from the head of the Catholic church…THE POPE…BUT its like getting a bad haircut or a botched face life…you can’t fix Ugly!

He should actually be excommunicated.

Yes, Biden and Pelosi both.

About time the Catholic Church stood up to these hypocritical politicians. They let the Kennedys get away with everything, divorce, remarriage, abortion and the list goes on. Archbishop Chaput finally stood up and did what was right. Amen

And Archbishop Cordiolone as well!

And Archbishop Cordiolone as well. He told Piglosi she was sending her soul to Hell by taking our Lord in the Holy Eucharist because she is slapping God in the face by supporting and promoting killing and all of the other anti-God acts the Demoncraps support. By their actions (the Liar in Chief and the Pig) they are “choosing” to go to Hell. They take pro-choice to another level. I’d hate to be present at their exit interview. Down they go and that’s what they CHOSE themselves.

I am not Catholic but I fear for those who support abortion. God is not mocked.

All Protestants who support abortion need to be worried as well as unfaithful Catholics; which is what the Liar in Chief and Piglosi are.

Completely agree! Pope Francis should do something about this fake president/Catholic and tell him in no uncertain terms, that he is sending himself to Hell by promoting abortion, transgenderism, and taking Jesus’s body, blood, soul, and divinity unworthily in Holy Communion is a travesty. He is leading uninformed Catholics to Hell with himself.

I completely agree that President Biden should be denied communion ! It’s a shame the Pope has not spoken about this . No Catholic should be prochoice!

Biden should also be denied the Ash Wedsnesday ash cross that he finds a way to be photographed with to show it off each and every year.

“president” joke biden and nancy pelosi (BOTH CLAIMING TO BE DEVOUT CATHOLICS) should not only be DENIED HOLY COMMUNION, they should shunned, and EXCOMMUNICATED FROM THE HOLY ROMAN CATHOLIC CHURCH for their liberal and anti-Christian views when it comes to the FIRST DEGREE INTENTIONAL MURDER of the unborn!!!!

Another catholic leader emerges from a decades long coma.

I agree. Biden (plural) should be denied Communion. So should Nancy Pelosi.

Biden can carry on all he wants about what a devout Catholic he is……….at the end of the day, he supports abortion which is 100% against the foundation of the Catholic Church..you can agree or disagree with that, whether that is right or not..but what you cannot do is be BOTH.
For or Against………….Biden tries to sit on both sides of the fence for VOTES, nothing else, and God will Judge this old man when his time comes..I don’t like his chances..

Not only because he is leading people astray by his actions but he is receiving Holy Communion in mortal sin. He needs to read about Purgatory and hell whether he believes in them or not. Pray for these people who have chosen to follow evil.