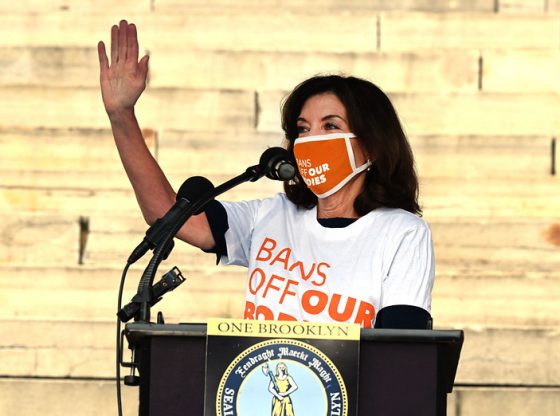 According to news reports, New York’s Democrat Gov. Kathy Hochul told Facebook to “clean up the act” on abortion “disinformation” following the pro-life law that went into effect in Texas on Sept. 1.

“From January 1st to March 20th, 2019, four out of 10 top stories receiving the most engagement on Facebook were articles about our very own Reproductive Health Act, and they are from anti-choice news sources that absolutely misrepresented and lied about the bill,” Hochul said during remarks on Monday. “That, my friends, is what I fear is going to happen again, that, that disinformation.”

“Imagine an 18-year-old girl, trying to make a decision that’s going to affect her life,” she continued. “She believes that she has the courage to do what she wants to do and say ‘I’m going to have an abortion.’ But at the same time, her friends and others are forwarding information and horrible messages and calling her a murderer. What does that do to the psyche of a young woman? It’s tormenting.”

“I’m asking Facebook starting today to help clean up the act, help us wage a campaign of truth and not lies with respect to what is going on in Texas and what was going on here in the state of New York, because misinformation spreads like wildfire.

“We’ll see what they do with it,” she said, referring to her letter.

“There is an assault on reproductive rights and access to safe, legal abortion happening in states nationwide,” the governor claimed.

“To women across this country, New York is a safe haven. We are committed to protecting your rights and health.”

There is oppression going on in our own country where people are trying to tell women what to do with their own bodies.

We are sick and tired and today we showed the rest of the nation that New Yorkers stand with every single one of you. pic.twitter.com/arjdqM9M2P

As long as leftists keep aborting their own….it’s something worth considering.
Even with easy access abortions, their numbers are still increasing.
Remember, the apple doesn’t fall far from the tree.

this govenor needs to be replaced

I would care less if I read in the paper that governor was term limited by a good stroke, heart attack, or high speed collision with a drunk driver…

Hocul, abortion is murder pure and simple! The most egregious murder of the most innocent of all God’s children! That is the message you should be sending!

How about ALL OUT PHYSICAL ASSAULT OF BABY KILLERS. START WITH HER, CUOMO IN DRAG. MORE OF A PREDATOR AND SEX TRAFFICKER THAN CUOMO. A COMPLETE LEFTIST WHORE.