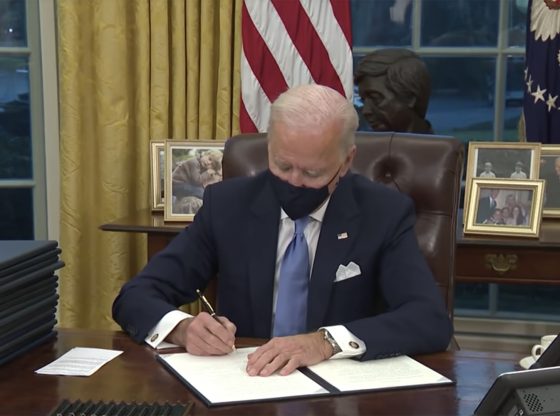 On Thursday, Joe Biden signed an executive order forcing Americans to fund International Planned Parenthood, which kills children in the womb all across the world and lobbies in favor of international abortion.

Later, the White House released a statement about the orders:

Across the country and around the world, people — particularly women, Black, Indigenous and other people of color, LGBTQ+ people, and those with low incomes — have been denied access to reproductive health care. President Biden is also issuing a Presidential Memorandum to protect and expand access to comprehensive reproductive health care. The memorandum reflects the policy of the Biden-Harris Administration to support women’s and girls’ sexual and reproductive health and rights in the United States, as well as globally. Like memoranda issued by President Clinton and President Obama before him, it immediately rescinds the global gag rule, also referred to as the Mexico City Policy, which bars international non-profits that provide abortion counseling or referrals from receiving U.S. funding. In recognition of the additional work necessary to protect access to reproductive health care, President Biden’s memorandum also directs the Department of Health and Human Services to take immediate action to consider whether to rescind regulations under its Title X family planning program.

“Nationally, Planned Parenthood is a billion-dollar company that does more than 340,000 abortions a year. International Planned Parenthood, which Biden’s order will force Americans to fund, operates in 164 countries. According to its most recent annual report, in 2019, IPPF killed nearly 1.4 million babies in abortions. This number is roughly forty-six times the number of abortions committed in 2005, which totaled to 30,011,” according to LifeNews.

Despite Biden’s executive order, a majority of Americans disagree with his stance on abortion, with most Americans believing in limits on abortion after a certain gestational age.

Then why don’t you sue for an injunction in a conservative federal court? Stop raising $ and address the problem as the Democrats have done for the past 4 years.

Not sure about everyone else but I’m sick and tired of funding things I’m against or have no interest in with my tax dollars. I wish we could just fund what our values are and let the Dems fund all their (just for show) interests. 99.9% of abortions have to end!

biden your butt will burn in hell for all these babies you will murder!!!I hope the Catholic church kicks you to the curb…you are a true devil worker, hope you are proud of your self..you and pelsoi will share the same coal bin in hell….

the Catholic church won’t do a thing to him, or to Pelosi, Kerry and all the other alleged “devout Catholics” in government because the church is corrupted within. they removed Pope Benedict and replaced him with a false prophet.

The Pope hasn’t condemned them…. he is a socialist

Who will undo the harm Biden has caused. The left sees no side but their own and feel free to harm those who disagree and get in the way of their ideology.

So that “catholic” murderer strikes again. We must get him and his socialist bunch out asap.

If any of them people that call’s themselves catholic including the pope would read their bible they would find what happened to the Holy Land because of abortions by King Ahab and Jezebel hands. God will allow all kind of thing to happen because he lifted the vale of protection from the United States just before 911. He allowed the towers to fall on the same land that George Washington dedicated the U.S. to God to use for His own wishes, at the church which still stands on the land . All the land that the towers stand on once belonged to the little church .

When God becomes angry enough at our inability to end abortion, the gay agenda, and a multitude of other sins he will act. When he does, the USA
will be unrecognizable, millions will die and the politicians who are left will have nothing to rule.

LISTEN UP….Why Should TAXPAYERS Have to PAY to COMMITT MURDER????? From SamuraiQueen. 😩😩😩

Well, this administration loves free abortions as birth control. They love young innocent children having sex. It’s what sick people do. Biden is a pedophile. There are videos of Hunter having sex with children on the laptop and Christopher Wray will do nothing about it. The FBI is as corrupt as any government organization starting at the top. Hey black Biden voters, and young Christian white couples that voted for Biden, are you starting to see what you put in place. Free sex changes, free abortions as birth control, and either sex bathrooms. Oh yeah nothing is free. You voted in the perfect people to turn Washington into a den of iniquity. Congratulations on the most disgusting and corrupt administration in the history of the world

How can he force me to go against God, I will die before I turned my back on my Lord, this is a satan led man acting he is our leader.

You may not know it and then maybe you do , but God doesn’t like for a woman or man to do anything that would keep them from being able to reproduce . It’s the same thing as abortion.

It is murder! You are guilty of murder.

It is murder …. I don’t want my money paying for murder nor the transitioning of people claiming they need a sex change

In reality , You are what God ordered . He knew you before you were born and most likley he caused your mother and father to make love at the time you were conceived . FACT.

Biden this is what I think of your executive order, when hell freezes over, my right my choice I will never support the MURDER of a baby, tell the rest of your murdering bunch bite me! God will NOT forgive you , have a black soul that you gave to the DEVIL! God giveth life only a God can take Away!