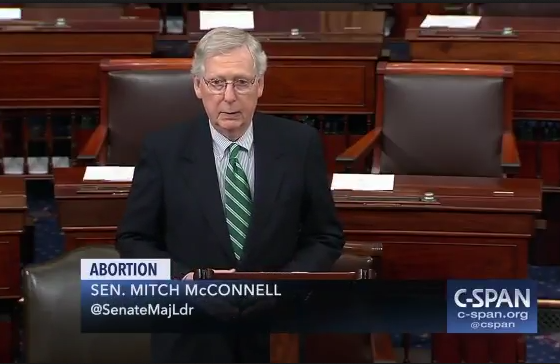 Senate GOP Leader Mitch McConnell warned Thursday of the “nightmare” that President Joe Biden and Democrat leaders are trying to push on the American people.

“This week, Democrats on the House Appropriations Committee are doing something so radical that it hasn’t been done for decades: They are advancing an annual funding bill that leaves out the Hyde Amendment, the commonsense prohibition on forcing taxpayers to fund abortion,” the Kentucky Republican leader said.

For decades, “a broad, bipartisan coalition agreed the American taxpayer should not be forced to underwrite this nightmare. And by the way, a strong majority of Americans still agree!” McConnell said.

“’Those of us who are opposed to abortion should not be compelled to pay for them,’” he quoted Biden.

“He let the demands of the increasingly radical left overcome a principle he’d held for decades,” McConnell said. “In today’s Democratic party, there is no room to dissent from the far left’s culture war — even in the most modest, most longstanding, and most widely popular ways.”

Anyone who funds abortions are as guilty of murder as the person’s having the abortion. Babies are Gods gift to women and mankind. If you as a woman don’t want to be pregnant by all means use protection.

I totally agree with McConnell. I am 100% against abortion. And I truly resent Biden giving my taxdollars to fund American’s abortions and especially hate now that he is using my tax dollars to pay for abortions in other countries. That should be illegal.

Agreed, but why should the American taxpayer fund ANYTHING in a foreign country?

Be careful, leftists: you are fooling around with human life issues, and God is watching. But shame is a word they’ve never heard.

Leftists have no God.

I was reading 2 Kings in the Old Testament this morning. This article reminds me of the government mandated idolatry (sacrificing children, promoting prostitution and worshiping pagan Gods) standing in direct opposition to God’s covenant with Moses. This idolatry was primarily wrought by the evil kings of Northern Israel and was gradually accepted by the Children of Israel. God is long suffering, but He did give Northern Israel over to their enemies on several occasions to rebuke their sin. It was only when they had a God fearing king – typically through the lineage of David in Southern Israel- that they were protected from their enemies and enjoyed peaceful prosperity as a nation.

We have church apostates for leaders claiming to be Catholic. They are trying to force and normalize Biblically defined sin onto this country by government mandate. History does repeat itself!

Does anyone really think the the party of death cares? This is why the cheat was on. Donald Trump was close to eliminating all federal funding and recognition of abortion as a “health issue and womens right”. We can still pray and know that we will be heard.

Dementia Joe will throw RINO Mitch some pork and he will back down!