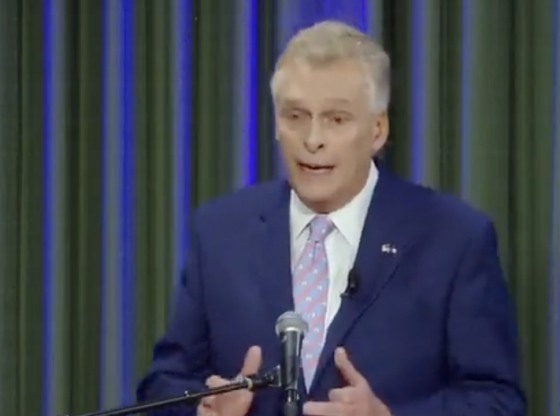 This week, Democrat former Virginia Gov. Terry McAuliffe faced off against Republican Glen Youngkin at a debate for the governorship of Virginia.

Once the abortion topic was brought up, McAuliffe made an extremely concerning statement regarding women in rural Virginia and their ability to get abortions.

He claimed, “that really puts women in rural communities at a real disadvantage” to not get full-term abortions after the third trimester of pregnancy.

.@TerryMcAuliffe: "women in rural communities" who cannot obtain 3rd trimester abortions because of Virginia's requirements are "at a real disadvantage." pic.twitter.com/o9Tm4WZ4VE

You know this is demonic! Because children are being abused, raped, murdered, indoctrinated and sold into sexual slavery in record numbers! All because there’s nothing more precious to God than children!

To bad your mother didn’t abort you,just before you came into this world, you creep.

That man is a disgusting baby killer. I wonder about the people of Virginia even considering that clinton/obuma creep.

He said it, “it’s crippling to our economy “.
He could careless about anyone’s rights, let alone that of the defenseless babies.
This man is despicable. Why are there so many hell bent on the slaughter of these innocent lives. Regretfully many know why, they have no respect for our Creator.
May God have mercy on this country.

“Crippling to our economy”?? What about all the babies that won’t grow up, who could have contributed some very great things to this World?! What a demonic mindset!

The guy in the top photo, bejayzus jeepers creepers, he looks like a lizard!

government should not be involved in this debate nor should they pay for abortions on demand this is a medical decision by an individual who says it her body and its her right and its my right to say pay for the murder of your baby yourself. i hate to think of you murdering a baby that has a heartbeat, its a signal that the baby is alive, your not deemed dead until your heart stops beating therefore when the heart starts beating the baby is alive and has protections under the constitution like any other citizen. make your decision before heart beat or if the baby endangers your life !! but pay for your body and your decisions yourself and leave me out of it !! Vietnam Vet 67-68

We kill babies and then go around the globe preaching human rights.

Internet censors be NOT involved in this debate either. Censoring posts is tantamount to contravention of the First Amendment. Corruption is rampant in big tech!

Amazing how the 60’s and 70’s and sexual freedom wreaked havoc on this nation. No morals, no conscience and we think God will bless this country after murdering 64 million babies in the womb….

If they really want to be responsible, they need to stop sacrificing their morality on the altar of so-called sexual freedom! Nothing is really free, there is a price to pay, and it should never have to be a baby’s life!

Well, that’s where you are mistaken. Life begins at conception, it’s alive at conception, otherwise the cells would not grow and multiply. It’s a baby from conception. And by the way, abortion is legal, but it is not moral or right or condoned by God. Every baby conceived is precious to Him, we are all created in His image. This bottom line is not who pays for it, it’s still legalized murder. Every baby from conception has a soul and spirit. What right do we have to end that. And praise God the souls of the unborn who are murdered go to be with Jesus Christ in Heaven. Oh yeah, and it’s been proven that the baby does not endanger the mother’s life, that is a fallacy. Rape does not give us a right to kill the innocent child either. You should look up the stories of women who have been raped and chose to keep their baby and how thankful they are…but of course that does not fit the evil agenda.
Read this, straight out of God’s Word, “19Because that which may be known of God is manifest in them; for God hath shewed it unto them. 20For the invisible things of him from the creation of the world are clearly seen, being understood by the things that are made, even his eternal power and Godhead; so that they are without excuse: 21Because that, when they knew God, they glorified him not as God, neither were thankful; but became vain in their imaginations, and their foolish heart was darkened. 22Professing themselves to be wise, they became fools, 23And changed the glory of the uncorruptible God into an image made like to corruptible man, and to birds, and fourfooted beasts, and creeping things. 24Wherefore God also gave them up to uncleanness through the lusts of their own hearts, to dishonour their own bodies between themselves: 25Who changed the truth of God into a lie, and worshipped and served the creature more than the Creator, who is blessed for ever. Amen.”
Notice the “without excuse” part and the part about serving the creature (Satan). And verse 22…
I am a vet also, which has no bearing on what I said.
No where in the Constitution does it say the baby has rights only when the heart starts beating….
I’m glad you survived Nam.

No surprise there. This is after all a democrat, they are known to be cold hearted twords any life but their own. Pelosi demonstrated that when she showed off her freezers of gourmet ice cream and chocolates while parents stood in line for hours to get enough food to feed their children for another day. Democrats are big on campaign promises but don’t actually keep them unless they profit from them.

That jerk is nothing but a murderer. His statement is totally against God’s will. STOP MURDERING BABIES.

He should have been aborted. His sacrifice would have saved so many lives.

I simply do not understand this overwhelming lust to shed innocent blood. Is it the primitive urge for human sacrifice?

Those who believe abortion is fine no matter what are under the control of satan. God’s Word tells us, ‘good will become evil and evil will become good’. We are seeing God’s Word in reality.

God is preparing us for the coming Rapture and Tribulation, just as Satan is preparing his followers for the coming Anti-christ. God used Trump so we could see more clearly how evil has become good and good has become evil. It will rain on the just and the unjust, so unfortunately we will be facing some tough times just before the Rapture. Be aware, be prepared and be in prayer!

No, it’s a hatred of God, Satan knows just how precious children are to Him.

How about give the inbred mountain people birth control? Losers

OK people lets make it a law! That if you the women wants abortion performed then you will also will be required to have a by full hysterectomy and the Father shall have a vasectomy’s prior to the abortion process!!

Obviously Roe v.Wade was incorrectly argued in 1973, since it has torn up this country in the intervening years, and will continue to do so as long as that decision is on the books. Bit regardless of one’s position on the issue, it’s irresponsible for any political candidate to advocae “full term” abortion, which was never part of the original decision. Any woman who has dithered about aborting a fetus until it’s nearly born has much larger problems than being pregnant against her will.

They said that on her deathbed, Roe regretted that she ever did this, but you’ll never hear that from Planned MurderHood! They’re even trying to distance themselves from the racist founder, Margaret Sanger. Oh how Evil loves to portray itself as an innocent “victim”!

I’m sorry but we fought a war, WW2, to stop ruthlessly tyrants to keep civilians alive. Abortion is worse than the holocaust, babies aren’t given a choice. And baby making is a choice! If you wish not to have babies guys keep your pants on. Rape is a crime and if a baby is conceived, the mother has to be square with her soul before terminating a life. This life dilemma can’t be mitigated by politicians, priests, men, or women. Choices have consequences and do-overs isn’t an option. Shotgun wedding use to mean something, a restriction to men and women. Making procreation a frivolous issue further complicated this problem. Reality bights and sets the rules. This is a line we can’t scribble past or erase.

Amazing how anyone would think the child conceived
in rape has to pay the price for the sin of the father and be aborted. It’s evil and insane.

True, that baby can be adopted if you don’t want it, rape should never be used as an excuse to end an innocent life! Some say, what if that baby’s created from incestuous rape and will not be normal in any mental or physical way? Then you pray to God about which direction to go. We still shouldn’t take it upon ourselves to end that child’s life, or any life, (except in self-defense) including our own! Ending a life for selfish means is never right… There’s only One who has the right to end life!

How about FULL TERM + or ++ abortions! It is really inconvenient to have to listen to crying infants!

Still yet another Catholic who has no problem opposing Church teaching. I also don’t understand how murdering babies is a sacrosanct right and gutless Bishops don’t take a stand or act like the Shepherds they are supposed to be.

First of all, not surprised he said that. Evil baby killers always have an excuse for their hatred of the
Lord God Almighty. He just thinks he will be exempt from judgement….won’t he be surprised. “Professing to be wise in their own eyes, they become fools”.

Disadvantage to who?? It seems to me the only disadvantage is to the baby, and quite possibly to the life of the woman who is stupid enough to get the abortion!

Is it too late for the mamas of the Socialist Democrat leaders to get late term abortions?

McAuliffe’s union buddies cover up rape if the rapist wears a skirt.
These are dangerous twisted people.
Vote everyone of them out.