Dem Rep: ‘I’m Not Ashamed’ of Killing my Baby in an Abortion

Home /National/Dem Rep: ‘I’m Not Ashamed’ of Killing my Baby in an Abortion 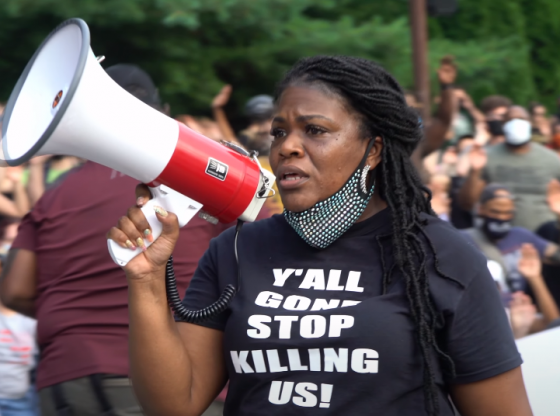 On Thursday, Democrat Rep. Cori Bush went on MSNBC to share her abortion story publicly for the first time this fall to try to persuade Americans to support legalized full-term abortion on demand.

In an interview with Vanity Fair, the Missouri congresswoman said her abortion “was the beginning of a very, very dark period … the darkest period of my life.”

Yet, Bush told MSNBC that she once opposed abortion, but now she supports it and believes there is an “urgent need” to expand abortions across the U.S.

“I am not ashamed,” Bush wrote on Twitter. She and other pro-abortion lawmakers plan to advocate for abortion on demand Thursday during a House Oversight Committee hearing titled, “Examining the Urgent Need to Protect and Expand Abortion Rights and Access in the United States.”

After she says she was raped she went to get an abortion. She said the staff treated her badly.

“She was almost angry. The way she was speaking to me, it was very belittling and degrading. I didn’t know why she was directing all of that onto me,” Bush told Vanity Fair. “I felt like I wasn’t given an opportunity to make a decision.”

She said the abortion made her feeling numb “for quite a while. That was the beginning of a very, very dark period … That was the darkest period of my life.”

Her story presents such a stark contrast to those shared by other rape survivors who chose life for their babies. Paula Peyton, for example, said her son’s life, though conceived in a brutal rape, has brought her “overwhelming joy.” Jennifer Christie, another mother who chose life after becoming pregnant to rape, said her son is a child of God, not a “rapist’s baby,” and it should not be considered amazing or unusual to refuse to kill an unborn baby just because circumstances are bad.

America will not be ashamed to PUNISH BABY KILLERS.

Life has a way of punishing BABY KILLERS
we do not have to do anything really
just pray and believe
God is REAL!!!!

All that I have to say to the WOKE Baby Killers is; Judgement day will come from GOD! Hope you are fire proof!

I hope that they are NOT fire proof! Evil creatures.

Conservatives take little comfort in the current state of American affairs. Seems every abortion is offset by a thousand illegal aliens who already vastly outnumber Black citizens. And illegal aliens “don’t need no steenkin” documentation because the government party (democrats) goal is to grant wholesale amnesty to the estimated 20 million already here.

Are most of the younger generation self absorbed just like the iPhone camera
always pictures of their good times graven in technology
they have no time to really think of the outcome
yes, Satan is after YOUR CHILDREN!

If a woman is raped then abortion should be a choice for her. Someone is out if their mind if they think a woman should be forced to raise a deranged criminal rapist’s baby.

one less Democrat voter is the way I look at it

She is a disgusting murdering monster.

Demons are never ashamed of murder, it endears them to their Satan!

Bush is a baby killer who needs a real job not one stealing from the taxpayers like most of the congress who are trying to destroy this great country.

NO MORE LIES NO MORE DEMOCRATS NO MORE BABY KILLERS, NO MORE BIDEN,Biden, has become the loose cannon that can’t be allowed to continue, this person has lost all American values, He has forfeited his right, to any position of power, If he won’t resign it’s time for impeachment, let’s get this done, before it’s too late. THE FREE WORLD STAGE WILL NEVER TRUST ANOTHER DEMOCRAT PRESIDENT, BIDEN, HAS SEEN TO THAT FOREVER, WHAT A CORRUPT DISLOYAL PERSON, NO SOUL NO HONOR, NO LOYALTY, NO ALLIES, JOE AND HIS LACK OF MORAL TURPITUDE, Time to hold the Biden family responsible for their crimes against our Nation, Time to hold his radical cabinet members responsible for their crimes against the American people, Time for full accountability on acceptance of money from foreign sources, who are adversarial to our Governmental and it’s ideals. principals. Biden crime family has been allowed to continue for too long. Time has come to hold the Biden’s for criminal acts against the American people. The Country can not continue on this path without the full input of Congress to hold the executive branch to the laws they created and that are in place to stop incompetent self elected dictatorships from taking our country and overreaching criminal political obfuscation by a mindless leader.

I just wonder if what is on her tee shirt was the message her murdered baby sent her?

Anyone who is not ashamed to kill a baby is a psychopath.

have you ever heard of birth control

Ms. Bush, where would you be if your mother had killed YOU?

Then I suggest that the woman that doesn’t feel guilty for killing her baby go to New York and assist the abortionist there that when a child is aborted and still fights for life, he cuts their vocal chords so that they can’t cry as he kills them. She can help by cutting their vocal chords.
Not murder, huh?

Cori, you SHOULD be ashamed – AND repentant! You murdered your own baby, you fool!

Cori, maybe you would have gained some wisdom from the responsibility of raising a child.

HE said “whatever you do to the least of my brethren , you do to me”. She might as well sin for the rest of her life, cause her place in HELL is reserved for the hottest spot.

Dems are for infanticide and genocide.

the left ist are for in fan tic,ide and genno cide….

She will be ashamed when shell dies and opens her eyes in Hell.

She should be!!! Prime example of why scum like this should not be encouraged to use murder as her form of birth control. Practice safe sex instead of killing your mistakes. You are scum of the earth!!!!!!!!

There will be that moment when this “proud of my abortion” person will meet the child she killed and have to look them in the eye. I don’t want to be there to see it. I have no need to witness vengeance or say I-told-you-so. Just saying she needs to be prepared. It’s going to bring her to her knees.

Democrat Rep. Cori Bush:”That [her decision to abort her baby] was the beginning of a very, very dark period … That was the darkest period of my life.”

And it seems that dark trauma did nothing to mitigate her ‘abortion on demand’ stance. Unfortunately, conscience is not so easily appeased due to its indelible function — unless of course an individual is incurably apathetic.

Tell that to God, when you see Him! Have a nice trip!

I have always opposed abortion, however when I look and listen to pelosi biden shumer et al I think I could be for it if it could be made “retroactive”!!!!