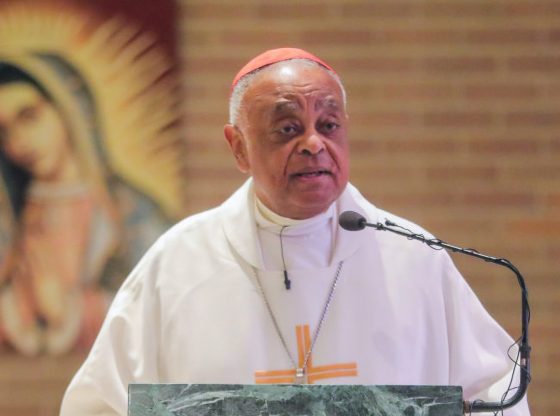 On the eve of Wednesday’s upcoming presidential inauguration, Catholic Washington Archbishop, Cardinal Wilton Gregory, is scheduled to take the stage with the incoming president, Joe Biden, for a “Nationwide COVID-19 Memorial” on the National Mall to honor those who died from the virus.

According to the event announcement from Biden’s inaugural committee, it made sure to explicitly note that Cardinal Gregory, belonging to the Roman Catholic Church, will deliver the invocation.

The press release’s biography for Cardinal Gregory reads as follows:

Cardinal Wilton Gregory is the seventh Archbishop of the Archdiocese of Washington and the first African American Cardinal in the Roman Catholic Church. Cardinal Gregory grew up in Chicago where he was ordained a priest of the Archdiocese of Chicago on May 9, 1973, and three years after his ordination began graduate studies at the Pontifical Liturgical Institute (Sant’ Anselmo) in Rome. There, he earned his doctorate in sacred liturgy in 1980. Cardinal Gregory has served in many leading roles in the Catholic Church including as President of the U.S. Conference of Catholic Bishops (USCCB) from 2001 – 2004. During his tenure in office, the crisis of sex abuse by Catholic clergy escalated; and under his leadership, the bishops implemented the “Charter for the Protection of Children and Young People.” The Charter also includes guidelines for reconciliation, healing, accountability, and prevention of future acts of abuse.

Although Cardinal Gregory claims to support “life in the womb” as a top priority, however, he decried the U.S. Conference of Catholic Bishops’ stance that it is a “prominent issue.” He told ABC News that “the references to it being the preeminent issue ‘could benefit from rephrasing.’” The current phasing “implies that other dimensions of human life can be dispensed with – and they can’t,” he added.

Cardinal Gregory has also decried other leaders in the Catholic Church, such as Rev. James Altman of Wisconsin, who declared that “You cannot be Catholic and be a Democrat.” According to ABC News, “Gregory depicted such remarks as ‘egregious and unhelpful,’ and said Catholic voters should base their voting decisions on ‘the full panoply of the church’s social teaching.’”

Now, it appears Cardinal Wilton Gregory is practicing his beliefs by taking the stage with pro-abortion Democrat Joe Biden, whose administration will not support any restrictions on abortion.

According to Biden’s campaign website, “As president, Biden will work to codify Roe v. Wade, and his Justice Department will do everything in its power to stop the rash of state laws that so blatantly violate the constitutional right to an abortion, such as so-called TRAP laws [or targeted restrictions on abortion providers], parental notification requirements, mandatory waiting periods, and ultrasound requirements.”

Some fear Cardinal Gregory taking the stage with Joe Biden will be “cements the perception of the Church’s approval of Biden despite his long history and continued support for abortion,” as Doug Mainwaring of LifeSite News writes.

His presence with Biden tomorrow will also give the appearance that he stands with Biden against the Little Sisters of the Poor who have waged a grueling legal battle against being forced to include contraception in their health plans, contrary to their pro-life religious beliefs.

Despite Biden’s rejection of authentic Catholic teaching, Gregory affirmed in November that he will not deny giving Holy Communion to him.

It is unclear what Cardinal Gregory will say during his invocation, however, just his presence on the stage with Biden already is raising eyebrows among the faithful in the Catholic church.

March for Life Opts for ‘Virtual’ March This Year
Joe Scheidler, the ‘Godfather of Pro-Life Activism’ Passes Away

Hey POPE, you got yourself an Arch Bishop that supports ABORTION….Is that a problem for you?…..and serves what supposed to be the holy sacraments to a man who is going to make sure more babies are killed….wow FAKE Catholics

I feel that Catholics that are pro abortion shouldn’t be aloud in the church. Leaders like Gegory is why millions of babies are killed a year. Catholic

My Bible tells me to examine myself before taking Holy Communion (that is to ask forgiveness) as I wouldn’t be worthy of communion. I was born in a Christian home (not Catholic) but I am dead set against abortion for any reason and I believe no Christian should support it and that all Christians should get out of the Democratic Party. And Joe Biden does not deserve Holy Communion. I also think this Cardinal needs to vacate The Church in that he is going against the Church. By the way. The trouble that is coming down on the world is not because of the way our leaders have been running the world but because of The Church in the way they have been teaching their people so it’s the Church that is being admonished and it’s all Biblical . Also the members of the Churches that don’t pay their tithes as GOD suggest they should. They don’t know what they are missing ! So there ! I said it.